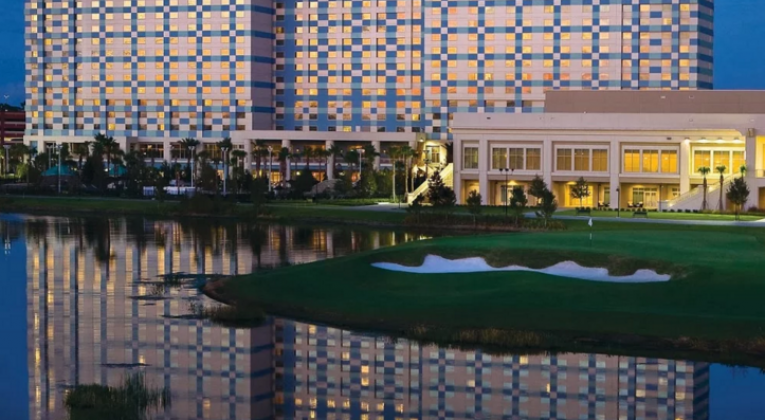 The Hilton Orlando Bonnet Creek, a 1,001 room hotel located about five miles from the Magic Kingdom, offers an excellent opportunity to earn Hilton Hhonors points while visiting the House of Mouse (second only in status to the House of Miles). I stayed there with my family (including two six-year-old kids) last year on a trip to Disney World.

The hotel is located right off of Buena Vista Drive and about five miles from the Magic Kingdom and twenty miles from Orlando International Airport (MCO). A cab from the airport is about $75.

Downside: Other than the hotel restaurants and those of the Waldorf next door, there’s not much within walking distance, so plan on your costs for dining going up.

Don’t worry about getting to the parks if you don’t have a car, though. There’s a free shuttle that can take you to the parks, which generally run every hour, except for the Magic Kingdom bus, which runs every half hour. Since the Magic Kingdom shuttle drops you off at a remote lot (where you will connect to the monorail or another bus), you’ll want to take the first bus of the morning (usually 8 am) if you want to get there right at the open.

Smooth. Our check-in actually started in the morning. We had stayed by the airport the night before and stopped by the hotel on the way to the park to drop off our bags. It took all of about 30 seconds to do so. The hotel has an enormous lobby and plenty of folks working at the front desk, so when we “formally” checked in later, everything moved quickly.

They thanked my wife for being Diamond and gave us breakfast vouchers. The vouchers entitled the parents to the continental buffet in the Harvest Bistro restaurant, while the kids were able to get the full buffet. There was no opportunity for an upgrade, since we had specifically requested adjoining rooms.

Absolutely functional. It was not elegant, but we had no plans to spend a lot of time in the room. Each room had two queen beds with a connecting door. The bathrooms had bathtubs with curtains for the showers, but many of the rooms also have a glass door shower without a bathtub. At over 400 square feet, the room offered plenty of space. The furniture and bed were both comfortable and the internet was fast.

While guests here also have access to many of the amenities at the Waldorf next door (and vice versa), we spent our entire time on the Hilton property.

Since it also serves as a conference facility, the Hilton had most of the amenities that visitors would want (in addition to the 132,000 square feet of conference space). There is a golf course, a nice gym, a spa and several restaurants, although only one of them even made an effort at being upscale.  The restaurant quality was, in our opinion, slightly better than we would expect at a place with kids heading for Disney World. Prices, not surprisingly, were a bit on the high side, but not terrible.

For families, however, the most popular activity will likely be the pool. It’s actually several different pools that are connected, surrounded by a three-acre lazy river. There are numerous entry points and depths, so it’s just as easy for a toddler to find a place to splash around as it is a teenager. It was never a problem getting an inner-tube and when our kids weren’t in the pool, they were at the water slide next to it. We spent a full day at the pool.

In general, it was very good. The only place where staff members were less friendly was at the breakfast restaurant, but there’s a certain level of difficulty associated with trying to get families seated, fed and on their way within a short period of time.

The plus side to a hotel with 1,000 rooms is that they have to fill all those rooms, so we felt that the value for what we received was excellent.

We were very happy with our stay here. Employees were friendly, the rooms were fine and the kids were happy to spend the day at the pool. And, of course, we got our Hilton Hhonors points. I would have no trouble recommending it for people who wanted to stay in the vicinity of Disney World without paying Disney resort prices.

Great amenities, decent rooms and a friendly staff at a very reasonable price. We were very happy with our stay overall and felt like we got great value from the property.

There weren’t a lot of cons. The location isn’t great but the shuttle service will take you where you need to go. The restaurant got very busy at breakfast. It’s the wrong property for you if you want upscale restaurants. For that matter, it might be the wrong city.

We were very pleased with the Hilton Orlando Bonnet Creek. It offers exactly what a Disney-bound family needs at the right price.