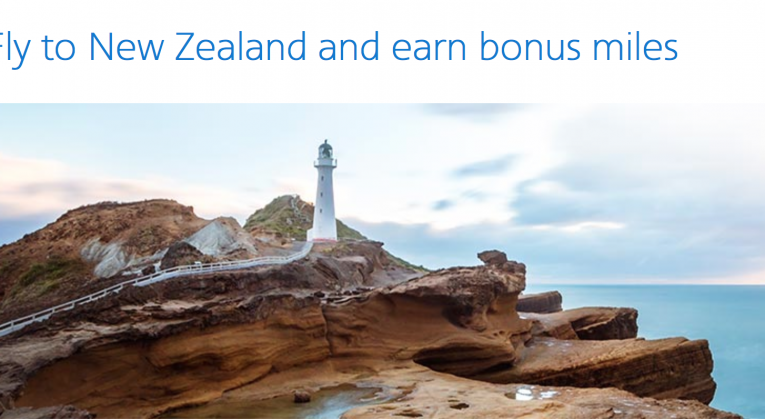 The daily service between Los Angeles and Auckland — featuring Boeing 787 Dreamliner aircraft — is operated by American Airlines; and you have an opportunity to earn bonus AAdvantage miles just for using this service as a passenger…

Earn Up to 30,000 Bonus AAdvantage Miles by Flying to New Zealand

For every eligible nonstop round-trip flight marketed and operated by American Airlines between Los Angeles and Auckland on which you fly as a passenger during the promotion period, you will earn bonus AAdvantage miles based on the fare class purchased.

The qualifying fare classes on flights marketed by American Airlines are as follows:

Flights operated and/or marketed by other codeshare partners are not eligible for this promotion. This offer applies only to AAdvantage members who purchase eligible published-fare tickets on or after Monday, May 23, 2016. Bonus AAdvantage miles will be calculated and awarded based on the number of trips purchased in a specific booking class. The bonus can only be earned for a maximum of two round-trips. Half the round-trip bonus will be posted after each eligible one way segment. Bonus AAdvantage miles do not count toward elite status qualification or AAdvantage Million Miler status.

If you are willing to pay a minimum total of $9,796.52 for two business class tickets with a fare code of I, you will earn 30,000 bonus AAdvantage miles; or you can pay $3,460.52 for two economy class tickets with a fare code of S to earn 5,000 bonus AAdvantage miles — both of which are the lowest airfares which could be found at the time this article was written.

You might be able to find lower airfares for qualifying tickets before the promotion ends — but unless you plan on flying as a passenger on that route marketed and operated by American Airlines anyway, only you can determine whether purchasing those airfares are worth earning the bonus AAdvantage miles.