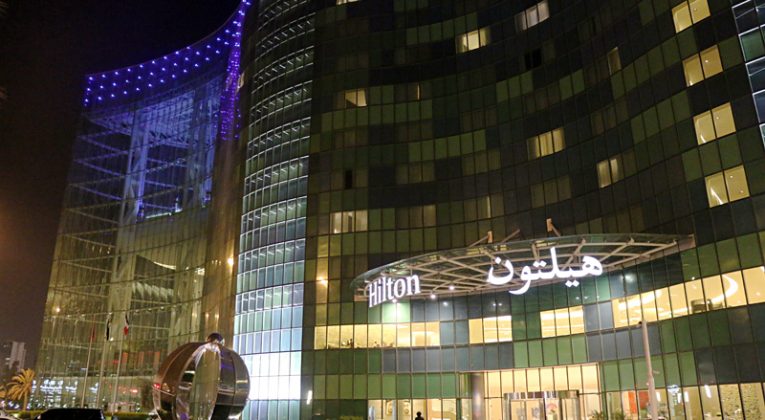 The Hilton Capital Grand Abu Dhabi is the hotel property where I stayed on the first night of my trip to the United Arab Emirates. My choosing of this hotel property was fairly random; but it was not far from the airport by vehicle, which I rented — although one could also easily take a taxi cab there as well.

Because I traveled to other countries during my visit to the United Arab Emirates, I booked several stays at this hotel property; and this review documents my first of those stays.

Looking forward to my stay, I drove the car I rented from the airport to the hotel after a long transatlantic flight from New York. It was evening; and I was tired. I was looking forward to a clean, comfortable bed on which to sleep — and I was not disappointed in the least.

Greeted by a blast of refreshingly cold air — courtesy of the climate control system upon entering the spacious lobby of the hotel — from the sultry and still night air in which the humidity felt like I was in a swimming pool filled with tepid water, I was cheerfully welcomed by the person behind the desk, who volunteered to me that I had been upgraded to a suite…

…and I did not even request a suite. To me, a good and unexpected surprise is the best type of upgrade.

The elevator ascended to the uppermost floor of the hotel, where I navigated a curved hallway to reach my room…

…and when I opened the door, I first saw a living room of sorts: a long couch, a rug on hardwood flooring, a flat-screen television and other furnishings; as well as art hanging on the walls.

I then turned around to see what appeared to be a bar and dining area; and I opened the cabinets, which were built into the wall. There was plenty of storage. A safe was towards the bottom of the left set of cabinets; and there was counter space and a mirror in the center between the cabinets — complete with a mini-bar.

Near the entrance to the suite was a chair and a desk — cluttered with all sorts of items — and amongst those items were two complimentary bottles of water; assorted teas and coffee with accompaniments such as sweeteners and creamers; an appliance for preparing the coffee or tea and a teapot to serve it; a notepad and pen; cups; silverware; a lamp; a router for Internet access; a menu; and other items.

Either a larger desk or a separate table was needed as a place for many of these items if the desk was to be functional — but that is a minor criticism at worst.

Also near the entrance was the guest washroom and toilet, which was not equipped with a shower — unless you count the sprayer device next to the toilet.

The Bedroom and Closet

On my way to the bedroom portion of the suite, I could not help but notice the illuminated futuristic stylings of the thermostat and the light dimmer switch.

The bed looked quite inviting — and it was indeed comfortable.

There was a doorway which led to the closet and the bathroom.

Storage was located on either side of the walk-in closet which is on the way to the bathroom, with plenty of places to hang and store clothes and luggage. Included in the closet was an ironing board with an iron; plastic laundry bags; a box on which to shine shoes; a cloth for shining shoes; a mending kit containing needles and different colored threads; two pairs of slippers; an extra pillow; two mirrors; and even a place on which you can place items or sit.

The entrance to the main bathroom comprised of two wooden ersatz French doors with frosted glass.

The main bathroom was equipped with two basins — each with two washcloths — as well as mirrors.

The shower and toilet areas were separated by glass panels — stylish; but certainly not private if more than one person wants to use the bathroom. The shower was equipped with a rain shower head.

There was also a bathtub, complete with a sprayer; and a television was embedded within a mirror, which you can watch while soaking in the bathtub. The remote control rests on the ledge of the tub near the amenities — which included bars of soap; liquid soap which had the pleasant scent of orange; a shaving kit containing a razor and shaving cream; a dental kit containing a toothbrush and toothpaste; a shower cap; body lotion, shampoo and conditioner.

…and the views were not much better in the daylight hours.

Viewing in the direction northwest of the hotel property, the stark white building with no windows is a shopping mall of sorts, which contains a Carrefour supermarket and a place to exchange currency where you can even exchange coins — all at rather favorable exchange rates. In one transaction, I successfully had three different currencies converted simultaneously.

Part of the view included the Zayed Sports City Stadium, where you can partake in numerous sports activities — some of which are free of charge — and the complex is located southwest within walking distance of the hotel.

There was plenty of construction occurring at the time, as evidenced by the massive cranes. The twisted glass building to the right of the center of one of the photographs in the background is the Hyatt Capital Gate, Abu Dhabi hotel property.

I had access to the executive lounge, which was on the same floor as the suite. There are a couple of computers on which you can work — as well as a printer, which proved very useful for me to print some important information pertaining to the remainder of my trip. For atmosphere, instrumental music consisting of smooth jazz emanated from one of the computers in stereo.

Breakfast consisted of hot and cold items; and although there were meat products such as bacon or sausage available, remember that the food is Halal and therefore consists of no pork products. There were plenty of baked goods — such as breads and pastries — as well as juices and fresh fruit at breakfast. Soft drinks and water are available throughout the day from the two refrigerator units below the main counter where the food is displayed. If necessary, there are enough items from the food displayed during the late afternoon and evening to comprise dinner; but you are most likely better off grabbing dinner either in the six restaurant, bar or lounge options in the hotel — none of which I used — or outside of the hotel.

There are few viable restaurant options within the immediate vicinity of the hotel property — including establishments within the aforementioned shopping mall and a Burger King adjacent to a petrol station directly across the street from the hotel. The food in the executive was indeed quite good; but do not expect upscale gourmet quality. For me, the obvious choice was the food in the executive lounge instead of from the Burger King — and the executive lounge was far more convenient to me than other options.

Every member of the staff was friendly, attentive and helpful — but again, only when you needed them, which is what I prefer.

While not near central Abu Dhabi, this hotel is located conveniently only a few minutes from Highway E10 and Highway E11, which will take you approximately 20 minutes from Abu Dhabi International Airport — or you can continue on to Dubai in approximately two hours. The corniche in Abu Dhabi is fewer than 20 minutes away if you take Al Khaleej Al Arabi Street. Sheikh Zayed Grand Mosque is only six minutes away by car; or you can walk to it door to door in less than one hour. I rarely encountered traffic; so access to virtually anywhere within the Abu Dhabi emirate via automobile is relatively easy.

I highly recommend this hotel property; and at a room rate of $84.65 for the night, this stay was a bargain — but I paid an even lower rate during my next stay…

Although generally convenient, not the most convenient to Abu Dhabi or the international airport
No known convenient option to public transportation
The desk was cluttered with items
Not the best views — but in a suite like this, who cares?

Other than the minor comments posted in this review, it was difficult to give any negative reviews, as this stay was nearly flawless. The room was clean and comfortable; and service from the staff was attentive — but only when I wanted it to be attentive. Otherwise, I was left alone. I was even able to park the car in the small parking lot just outside of the hotel at no charge. Based on my experience, I highly recommend staying at the Hilton Capital Grand Abu Dhabi.