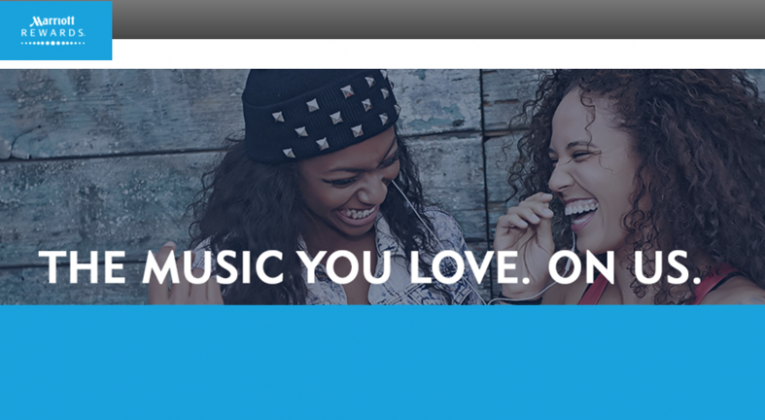 Did you know that you can score some new music without paying a single penny for it simply by being a member of the Marriott Rewards frequent guest loyalty program?

Well, you should — this article which announced this nice new benefit was first posted here at InsideFlyer on Sunday, February 28, 2016; but there is one welcome difference which had been quietly implemented: the code which you will receive now expires on Saturday, December 31, 2016 instead of Thursday, June 30, 2016. You are eligible for a new code every Friday.

You read that correctly: no notice was given pertaining to the change; so if you thought that you are too late in participating in this promotion — well — think again.

Marriott International has teamed up with Universal Music Group to give music downloads to you: one code is worth ten complimentary song downloads for your music playlist; and the codes will be given away to the first 10,000 eligible members of the Marriott Rewards frequent guest loyalty program for a limited time. All you have to do is sign into your Marriott Rewards frequent guest loyalty program account — either through the official Internet web site of Marriott Rewards or via Facebook — or join if you are not already a member; and you are ready to add songs to your playlist.

One very minor negative aspect to this offer is that the songs cannot be downloaded to portable electronic devices using the iOS system software; which means that you will need to download them onto a desktop computer or laptop computer. That really is not a big deal, as you can just simply transfer whichever songs you want onto your portable electronic devices as necessary.

You must be a legal resident of — and physically located within — the 50 United States, the District of Columbia, and territories of the United States.

No exchanges or returns are permitted; and codes may not be redeemed or exchanged for cash. The number of song downloads available for each code may vary for each promotion. Any personal data relating to participants will be used solely in accordance with current data protection legislation and will not be disclosed to a third party — other than the agencies of the sponsor for the purpose of servicing or implementing the offer — without your prior consent.

…but keep in mind that the name of this promotion is basically a misnomer in two good ways, as it is not limited to new music. Catalogs of certain artists — such as Elton John from the 1960s through 2016, for example — are quite extensive and span the careers of artists whose music has been under license of the aforementioned recording labels over the years. Also, you do not have to request a code on Friday, as that is simply the day when a new code is released. You may request the latest code during subsequent days.

Many genres are represented in the expansive music library — rock, disco, comedy, soul, rhythm and blues to name only a few.

Depending on the albums from which they reside, finding different versions of the same songs — remastered, extended or live as only three of many examples — is not uncommon. Also, the songs are typically at a bit rate of 320 kilobits per second, which is considered high quality for a song in .mp3 format — although arguably not as high in quality as lossless formats such as FLAC. Then again — unless you are a true audiophile — you most likely will not notice the difference in the quality of the sound; and the virtually universal .mp3 format can be played by almost any device anywhere.

Despite the terms and conditions stating that you must use your Facebook account to obtain the code, all you need to do is log in to the official Internet web site for the Marriott Rewards frequent guest loyalty program and sign in to see the offer; and when you see it, simply click on the link for more details.

You do not have to download all ten songs at once with each code, which means that you can research and find out exactly what you want before downloading music. You can download two songs today, three songs tomorrow and five songs four months from now if you like — as long as the code you have is valid.

This is a nice — if not decidedly underrated — promotion from Marriott Rewards; and if you qualify to participate and enjoy music, you should consider taking advantage of this offer.