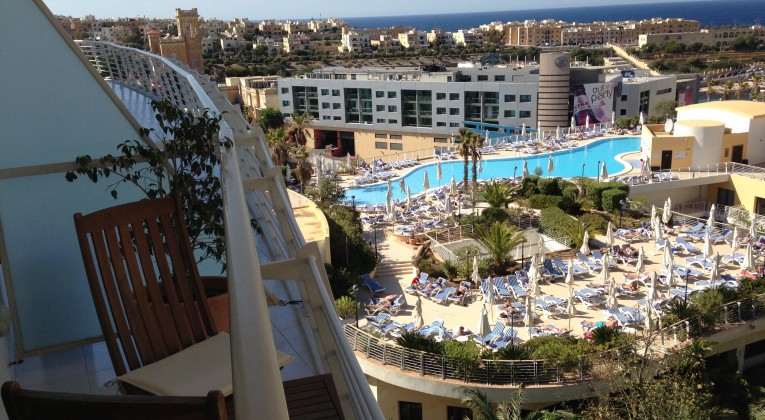 The value of real estate hinges upon location and the InterContinental Malta is located in a great part of Malta, just minutes from the capital city of Valletta and nestled among many trendy bars and restaurants. It’s not so bad inside either.

I arrived into Valleta International Airport (VLA) in the late morning from Stockholm. Public transportation is limited to busses in Malta and Uber is not yet present, but shared taxis and hotel shuttle busses are available. The ride from the airport to the hotel took about 40 minutes, with a fair amount of traffic encountered for the middle of the day.

Upon reaching the hotel, I knew I was about an hour early, but the hotel was able to check me in and offered me an upgraded room, ostensibly due to my InterContinental Ambassador status. The lobby is fairly spartan, but the associates were very friendly.

As I mentioned above, the location of the hotel is quite central. It’s not in the capital city, but the island is small enough that you could walk there if you wanted to (which I did). Around the hotel is a very active nightlife scene with more than a dozen bars that were filled with both young and old after dark. Does this cause a noise problem at the hotel? Certainly none that I noticed. There is also western chains like Hard Rock Café and McDonald’s within walking distance, but when you’re in Malta there are better places to eat.

The room was generously sized, with an entry hall leading to a bathroom on the right and the main room on the left, a large room with a sitting area and sleeping area. The room had bright colors and tile floors, with natural light pouring in from the balcony outside.

The balcony was small, but still had a sitting area with two chairs and a small circular table. My room overlooked the pool below but was high enough to see the ocean.

Bedding and the bed itself were more than adequate and a TV was present, which I did not switch on. Complimentary wi-fi is available for all guests and the speeds were sufficient to do everything I needed, though I did not try streaming videos.

The closet was so large you could stuff a rollaway bed in it. I was traveling only with hand baggage, but there was room for an entire wardrobe. Two white robes were hanging in the closet and a safe was also available.

The oversized bathroom offered plenty of room to move around. It featured generous counter space, a large walk-in shower, oversized bathtub, and separate WC. Amenities from Agraria, a San Francsico-based company, were placed on the counter a long with other amenities like dental and shaving kits.

A full-size purple-velvet couch felt a bit eclectic in the room, but was a comfortable place to work. Due to my Ambassador status, a bottle of Maltese red wine, sparking water, and a fruit plate were waiting for me when I checked in along with a non-personalized note from the GM.

On the other side of a room was a wing chair with ottoman, which I almost fell asleep on when doing some late-night work.

I tread carefully in saying that the hotel is past its prime, because that is actually part of the charm. Let me explain. “Past its prime” is sort of the trend in Malta, an ancient nation with aged yet ageless architecture that gives it immense character. Just minutes from the hotel are top sites like St. Johns Co-Cathedral, built by the Knights of Malta over 430 years ago, as well as other architectural landmarks.

No, the hotel is not that old, but it is not what I would call a modern property. Looking out the balcony I actually thought this might be what it feels like to be on a cruise ship in the 1990s, but that truly is not as bad as it sounds. The property was very well-maintained, clean, and had the right mix of resort and city hotel.

The vast pool certainly attracted crowds, but there were enough chairs for everyone. A fitness center provided sufficient room to workout with recent equipment.

Several dining choices are available at the hotel including its signature Waterbiscuit Restaurant and Lounge/Bar, Paranga, and Narcis Pool Bar & Grill. I was in Malta for one night and did not feel like eating at the hotel. Had I been at the property a few more nights, though, I am sure I would have tried the restaurants.

I did enjoy the hotel’s breakfast buffet, which was included in my room price. The buffet featured and array of hot and cold items including eggs and crepes cooked to order. I have had better quality, but was very satisfied with the breakfast.

I mentioned already that I am an InterContinental Ambassador, a paid membership program in which I receive perks including room upgrades and welcome amenities. I find the Ambassador program pays for itself in the free weekend night that is given each year, but the welcome amenity and spacious room were an added bonus.

The hotel has a lounge that has recently been refurbished. I did not have access to it during my stay, but did sneak my head in during the evening hor’d’ourves and noted that the food spread was decent and the lounge featured very nice outdoor and indoor seating.

I paid 129EUR/night for the room and thought it was worth every cent, especially consider that the hotel allowed me to check-in one hour early. You shouldn’t count on that, but it never hurts to ask. Overall, I got exactly what I bargained for – a nice hotel in a beautiful part of a beautiful country. I would not hesitate to stay here again next time I am in Malta.

The hotel is showing its age a bit, but is also taking steps to refresh itself, such as the recently renovated lounge. Dining choices are plentiful, but rather expensive compared to the myriad of restaurants available in the vicinity of the hotel.

I recommend the Intercontinental Malta for those in transit and those on extended holiday. Somehow the hotel is able to fill a double-persona as a family-friendly resort and yet a business-friendly city hotel. Rooms were comfortable and large the staff was very accommodating.