Based in Riga, Latvia, airBaltic fly to over 70 destinations throughout Europe, as well as further afield to places such as Abu Dhabi and Azerbaijan. Latvia is one of the Baltic states in Europe, the other two being Estonia and Lithuania.

The backbone of the airBaltic fleet is the Airbus A220, formerly known as the Bombardier CSeries. With 19 in service and 41 on order, the carrier is reportedly very pleased with the new aircraft’s performance.

First in the series honours airBaltic’s home country of Latvia, with an aircraft painted up to resemble the Latvian flag. Named Riga for the capital, it took 15 professional painters 1,000 hours to produce the final result. 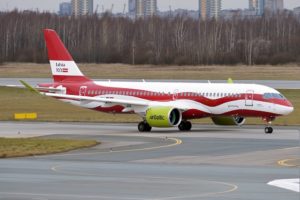 In June of this year, another special livery appeared, this time in the blue, black and white of the Estonian flag. Just like the Latvian one, this Airbus A220 gained its namesake from the capital city. In this case, Tallinn. 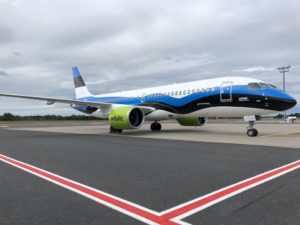 Yesterday, the series became complete with the commemoration of Lithuania. The airplane was hailed Vilnius. It features the yellow, green and red of the tricoloured flag of Lithuania. 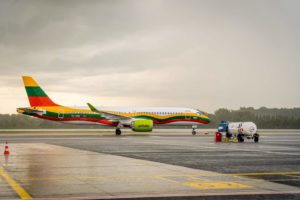 All of the aircraft keep the lime green engines and winglets of the usual airBaltic livery. Since the airline bases one A220 in Vilnius and two in Tallinn, you would expect these special jets to see a lot of use there.

Painting aircraft in special liveries is always a good thing, in my opinion. In this case, going with the Baltic countries really makes sense, considering the airline is airBaltic and not something like Air Latvia.

While the Latvian Airbus A220 has appeared at special events such as the start of the service between Dublin and Riga, I’ll be curious to see if the others make it around the network. Hopefully so, because they do stand out!

What do you think of the airBaltic flag schemes? Have you flown airBaltic before and what did you think? Thanks for reading and if you have any comments or questions, please leave them below.

Featured image and Lithuania A220 via airBaltic.
Estonia and Latvia A220 via Flight Global.