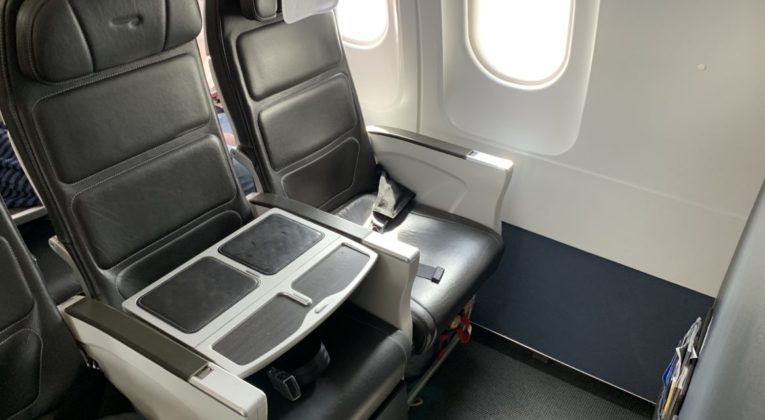 Finally, last month, I took my first flight in business class on European airline solely within Europe. From what I’ve heard from other bloggers and frequent flyers, I was to expect poor service, awful legroom, and little to no onboard amenities. However, my two-hour flight from London to Berlin was a pleasant surprise that ran completely contrary to what I’ve heard about intra-European business class.

Here’s what it was like to fly in British Airways Club Europe from London-Heathrow to Berlin-Tegel.

Avios are a great way to unlock cheap domestic flights in the United States and short-haul flights throughout Europe. If you’re low on Avios, be sure to check out this current promotion.

Lately, I’ve been pushing the limit of how close to departure time one can show up and still make their flight. That being said, I arrived at Terminal 5 at London-Heathrow just 40 minutes prior to departure.

Unfortunately, that meant I wouldn’t have the opportunity to check out any lounges at the airport. As a passenger booked in Club Europe, I had access to the Galleries lounges as well as a few Oneworld partner lounges in other terminals. I did get to use the Fast-Track line at London-Heathrow which might have been the only reason I wasn’t the last passenger to board my flight.

Fast-Track security screening is located adjacent to the premium check-in area. The terminal was quite busy and the line at security reflected that. Still, I managed to pass through security in just 10 minutes. With boarding set to begin in minutes, I made a quick stop at a newsstand for a bottle of water and then made a b-line to my departure gate.

To my surprise, boarding had already begun. US-airlines rarely enforce designated priority boarding lanes so I assumed I’d be waiting in a long line of economy class passengers waiting to board.

This wasn’t the case and there were two British Airways gate agents holding passengers aside while Club Europe and elite frequent flyers boarded. I showed one of the agents my boarding pass and was welcome on-board. Boarding my flight to Berlin was easily one of the smoothest and most efficient boarding processes I’ve ever experienced.

For my first beverage, I ordered the champagne. The champagne was served with a glass with the crew serving the entire mini-bottle, something US airlines never do. While not the best champagne I’ve ever had, it was certainly more than sufficient for the short flight to Berlin.

Once passengers had settled in and enjoyed their first round of beverages, the flight attendant came through the aisle to take meal orders. There were two options: afternoon tea service with finger sandwiches and a meat and cheese plate.

Again, this flight was relatively short. Still, the on-board service was quite extensive. The meat and cheese plate was extremely tasty and filling. The flight attendant later came by to offer a selection of bread and jams. I went with a biscuit and some strawberry jam. The biscuit was unbelievably fresh and tasty. It reminded me of the biscuits previously offered by American Airlines in first class a few years back.

After the meal service wrapped up, the flight crew came by to assist passengers hoping to buy items from the seatback duty-free catalog. Normally, this service wouldn’t interest me, however, I decided to buy two jars of the limited edition British Airways-branded Marmite. Though I find Marmite to be horrid, I knew I’d kick myself if I passed up the opportunity to add a jar to my collection of aviation memorabilia.

Once the duty-free service wrapped up, the flight crew made their way through the Club Europe aisle every so often to refill drinks. After three mini-bottles of sparkling wine, I decided to try the limited-edition Speedbird 100 IPA. Though I’m not usually a fan of IPAs, the Speedbird 100 IPA may very well be one of my favorite beers. It was one of the less bitter IPAs I’ve had yet, it was still quite flavorful.

After two of the Speedbird 100 IPAs, the crew came through the aisle to collect any remaining service items as we began our descent into Berlin.

This may come as a surprise but I found the seat to be pretty comfortable. Albeit, the flight was just under two hours. I can’t imagine this seat being worth the price of a business class ticket for a four or five-hour flight. Still, for this flight, I found the seat and legroom quite comfortable.

Like many European airlines, British Airways simply blocks the middle seat in a row of economy class seats and brands it as business class. On some aircraft, Club Europe does feature additional legroom. The Airbus A319 operating my flight from London to Berlin was one of these aircraft.

I selected seat 4F. Seat 4A was the only other seat in row 4 that ended up occupied which meant I ended up having an entire row on the right side of the aircraft to myself. On this particular aircraft, row 4 featured both additional legroom and slightly wider seats than other Club Europe seats.

For what it’s worth, I’m 5′ 10” (~178 cm) and found the legroom to be sufficient for the short-hop to Berlin. The legroom was around 31” inches (~78 cm) for my seat. The recline is probably my only complaint. Though I’m not one to recline my seat in economy, I usually kick back when in a premium cabin. The recline in Club Europe was about the same as what’s offered in domestic economy class in the US, so, not that great. As for seat padding, I couldn’t tell a difference between my seat in Club Europe and a seat in business or first class seats in the US.

Finally, in terms of in-seat amenities, there weren’t any. British Airways is in the process of retrofitting a few of its intra-European fleet with in-seat power and in-flight WiFi. Unfortunately, my flight had not yet received either upgrade. Again, it wasn’t a huge deal as I had charged my device before the flight and didn’t urgently need to access the internet.

After my flight from London to Berlin, I understand some of the complaints flyers have about intra-European business class. However, I’m beginning to think many of these complaints are blown out of proportion.

While the hard product (seat, in-flight entertainment) is a step down from what’s offered by US and other North American carriers, the soft product (food and beverage, in-flight service) was a step up. I thoroughly enjoyed my afternoon snack and found the service provided by the crew to be somewhat of an improvement compared to what I’m used to in the US.

OTHER POSTS FROM THE UNACCOMPANIED FLYER: