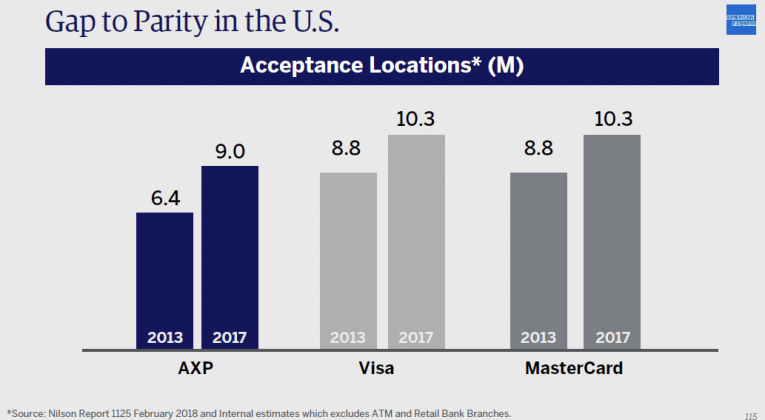 As someone who writes regularly about credit and charge cards—specifically, travel-rewards cards—I’ve often found myself chasing after a key data point.

It’s well known that American Express charges higher merchant fees, and that fewer merchants accept their cards as a result. What’s been harder to pin down was the exact number of Amex merchants, to be compared with the number of merchants in the Visa and MasterCard networks.

Visa and MasterCard have always been fairly transparent when it comes to revealing the size of their merchant networks. (Because Visa and MasterCard are seen as mostly interchangeable by consumers, and because they charge the same merchant fees, their networks are roughly the same size.)

Getting that information from Amex, on the other hand, has proven more challenging. The information, I was told, was “competitively sensitive.” No surprise. American Express is a company known for its arrogance, and it stands to reason it wouldn’t want to quantify its competitive weaknesses.

But in an investor presentation (.pdf) earlier this month, American Express laid out its strategy for increasing its merchant base (by reducing merchant fees, predictably), and included some current numbers for the three U.S. networks, including its own:

So there you have it. As things currently stand, around 1.3 million more U.S. merchants accept cards from Visa and MasterCard than from Amex. Not necessarily a deal-breaker, but something to consider when deciding whether to apply for an Amex Platinum card or a Chase Sapphire Reserve (Visa) card.

Given Amex’s goal of approaching parity with Visa and MasterCard, that gap is likely to narrow going forward. In 2017 alone, Amex added 1.5 million merchants to its network. But Visa and MasterCard’s are undoubtedly growing as well. Another data point to track down …

When choosing a credit or charge card, do consider the size of the merchant network?