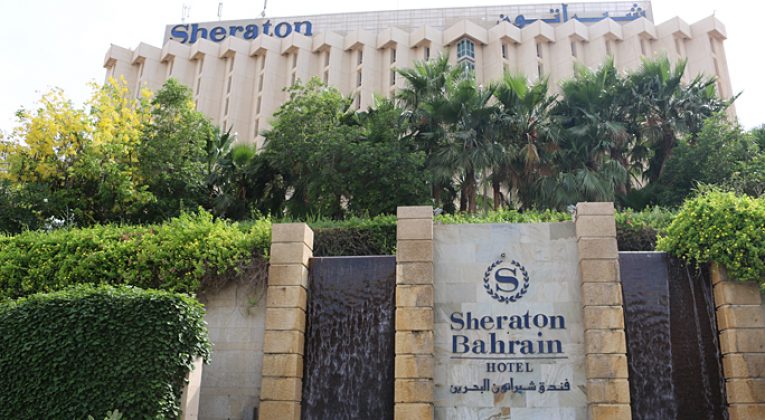 Starwood Hotels and Resorts Worldwide, Incorporated has three hotel properties in Bahrain; but of the three, the Sheraton Bahrain Hotel in Manama offered the lowest room rate — even though the other two hotel properties participating in the weekly SPG Hot Escapes promotion greater than once…

…but despite my weeks of searching, the Sheraton Bahrain Hotel participated in the weekly SPG Hot Escapes promotion after my stay and offered a significantly lower rate — just my luck, of course.

I approached the hotel, which is located fewer than nine kilometers — or approximately 15 minutes — from the international airport which serves Bahrain; and the architectural design appeared outdated to me. Still, the grounds were well-maincured and lush.

I drove up the hill on which the hotel is perched — strangely enough, I did not see any other hills in Bahrain — in the car which I rented. There is a parking lot which is free of charge for guests. The friendly parking attendant gave a ticket to display in the window of the car before parking it.

Rather than a counter, there are several desks where guests can check in. Members of the staff were friendly and smiling. I received my plastic key card and proceeded to the elevator.

Upon exiting the elevator, I found it somewhat bizarre that there were photographs of scenes of New York on the wall of the vestibule of the floor on which my room was located.

They were nice; but I would have thought that photographs of some of the unusual buildings in Manama would have been been a better choice. I simply shrugged my shoulders — with the question marks popping out of my head in random colors — and headed towards the room.

The room seemed slightly smaller than what I would consider a room of standard size — it felt a little crowded, for some reason — but it was clean and nicely appointed. There was the standard desk area with a flat-screen television above it. A nice touch was that the electrical outlets were of the universal kind — which means that any guest from virtually anywhere in the world can use them without an adapter.

The room had a minibar located across from the bathroom as you walk in through the short hallway.

I had no elite level status in the Starwood Preferred Guest frequent guest loyalty program at the time; so I accordingly had no expectations of anything above and beyond a standard room, which is what I received — but I did receive a welcome surprise of a fruit plate, which consisted of a banana, orange, green apple, red apple and grapes; and there were two complimentary bottles of water awaiting me on the nightstand between the Sweet Sleeper beds, which were comfortable.

The remainder of the room had some nice amenities in the closet — such as a robe, iron, ironing board, a safe and other items.

I wore sneakers; so I had no reason to take advantage of the complimentary shoeshine service offered by the hotel. I like when a hotel offers slippers with which I can remove my sneakers and walk around the room without getting my feet or my socks dirty, as the floors of hotel rooms are never completely spotlessly clean.

Complimentary Wi-Fi service was available to access the Internet.

The bathroom had plenty of towels and was nicely appointed with the standard set of amenities; but otherwise, there was nothing special about it.

I am usually successful at staying out of photographs taken in hotel rooms; but in the case of this bathroom in correlation with the locations of the mirrors and the door, that was impossible to achieve.

The view from my room was certainly not the best view I have ever had from a hotel room; but not the worst view, either.

The design of the building included narrow windows, which did not let in enough ambient light, in my opinion.

I did not dine at any of the five restaurants in the hotel while I stayed there; so I cannot comment on the food — nor did I use the fitness facility or swimming pool, both of which apparently would have incurred an extra charge.

I have no idea what I received in return for that service charge, which seems to be little more than the equivalent of a resort fee — and I abhor resort fees. Perhaps it was for the complimentary wireless Internet service; or perhaps it was for the fruit plate? Maybe the complimentary shoeshine service or the free parking was part of the service charge? I have no idea…

…but regardless, if you find yourself in Manama — which is the capital city of Bahrain — consider staying at the Sheraton Bahrain Hotel. It is conveniently located not too far from the airport or the city center. The hotel property is attached to Moda Mall, where the latest in fashion and items for the opulent lifestyle are available for purchase. If you prefer a less expensive shopping experience, consider visiting Manama Souq instead — but do not expect to find items made in Bahrain.

My stay was nice and uneventful; but it was also nothing extraordinary about it either.