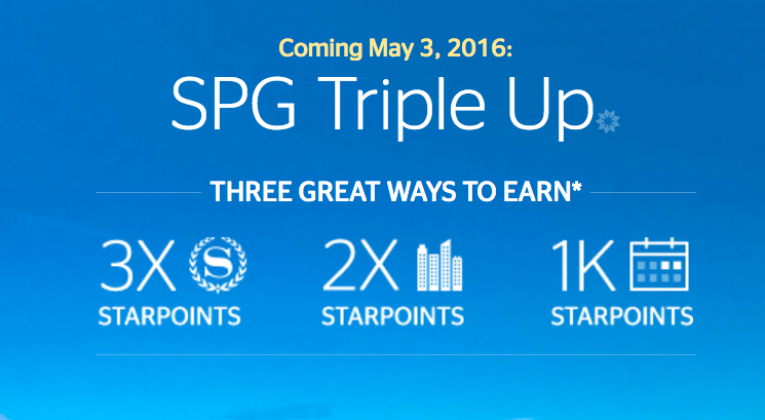 Starwood has announced a promotion called “Triple Up”, that will offer up to triple points for stays between May 9 and July 31, 2016.

Here are the details –

Once registered, you can earn triple Starpoints on stays of two nights or more at Sheraton Hotels between May 9 and July 31, 2016.

You can earn double Starpoints on stays at all other brands. There is no limit to the number of double or triple Starpoints that can be earned during the promotion.

If your two-night stay includes a Friday or Saturday night (Thursday or Friday night in the Middle East), you’ll also get 1,000 bonus Starpoints.

The double, triple, and bonus Starpoints will post within 2-4 weeks after the qualifying stay posts. Here’s a link to the promotion FAQs.

Note that bookings made through 3rd party booking sites like Orbitz are not eligible for the promotional offer, nor are Cash & Points or award bookings.

You can find the list of participating Starwood hotels here and there are 529 in the United States alone, so even though not all properties are participating in the promo there are plenty to choose from!

One of the good things about this promotion is that it is also combinable with other promotions.