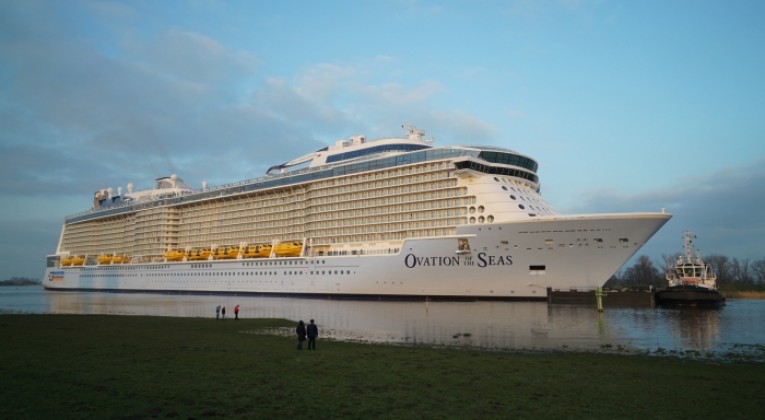 Ovation will sail a series of short cruises from Southampton, U.K. before she embarks on a 52-night “Global Odyssey” voyage to her homeport in Tianjin, China, where she’ll begin offering cruises in June 2016. According to Royal Caribbean, Ovation of the Seas, together with Quantum of the Seas, Mariner of the Seas, Voyager of the Seas and Legend of the Seas, will make up the largest fleet of any cruise line sailing in China.

Ovation and her sisters, Quantum of the Seas and Anthem of the Seas, feature a number of first-at-sea amenities including the North Star, an observation capsule that rises more than 300 feet in the air to treat cruisers to panoramic views; an iFly skydiving simulator, and Royal Caribbean’s popular Flowrider surfing simulator. Ovation also features SeaPlex, an amazing activity space which includes basketball, roller-skating, and the first bumper cars at sea. Rounding out Ovation of the Seas’ entertainment spaces is Two70, a social space by day, which evolves into a multifunctional entertainment venue in the evenings.

Quantum-class ships offer 18 restaurants onboard with a variety of different choices to please every palate. Ovation of the Seas spans 18 decks, encompasses 168,666 gross registered tons, carries 4,180 guests at double occupancy and features 2,091 staterooms.