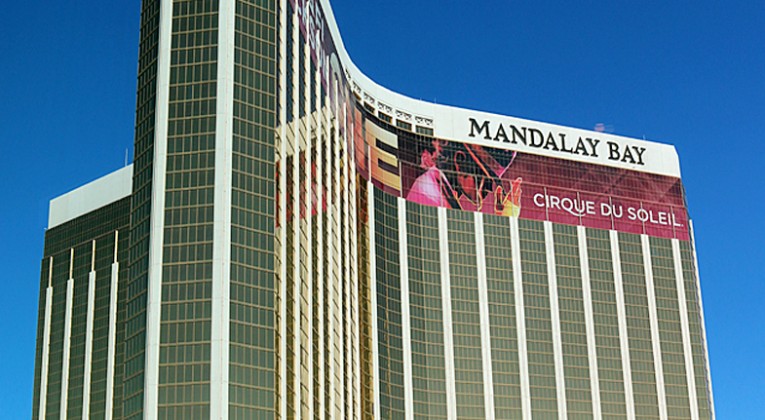 I could see the Mandalay Bay Las Vegas hotel property — where I had a reservation to stay for two nights — on the edge of the airport outside of the window of the airplane as it landed on the runway. It seemed close enough, so…

…rather than take a taxi, I walked from Terminal 1 at the international airport which serves the Las Vegas metropolitan area to the Mandalay Bay Las Vegas hotel property. Exercise: good. My legs are more than adequate to handle what probably was a distance of approximately two miles in greater than one hour. Cost: $0.00…

…but if the air temperature is too high — or if you are not physically fit enough for a long walk despite the ground being flat the entire way — I would advise that you consider taking a taxi or other form of vehicular transportation, as the terminal and the hotel are on opposite sides of the airport.

Although I had both accounts linked at the M Life services counter in the Mandalay Bay Las Vegas hotel property — which is not near the front desk — my room was on a lower floor. Other than a better view, I do not believe I was missing anything.

My room was nice — larger than a typical hotel room; and with two large closets.

While this is far from the best bed in which I had ever slept in my life, it was reasonably comfortable. Take away the decorative pillows and you only have two pillows; but an extra pillow is available in one of the two closets.

Although there was one on the wall beside the chair, I found myself wishing that there was an electrical outlet or two on the desk area.

There were stains on my linens — including one stain on the top cover sheet and a different one on the bed sheet itself. What kind of a stain would be greenish in color such as this splatter stain? Mouthwash? Toilet bowl cleaner? The sweat of a martian? It was not glowing, so it could not have been radiation of any type.

I am sure that the sheets were clean and that these were stains that simply could not have been removed; but it was no matter anyway: this was in a king bed, so I was able to easily avoid sleeping on the stained areas.

In fact, the entire room was quite clean. The “white sock test” — when I walk around the room in white socks — revealed that the floor was relatively clean due to very little soiling of the socks after walking around the room.

Despite being on a lower floor, the views were still nice from the room.

Tip Although bottled water did not come with my room for whatever reason, do not be shy about asking for water if you are an elite member of the M Life frequent guest loyalty program. You will receive at least two bottles upon request — no questions asked. One request netted me four bottles.

The toilet is in its own area in the bathroom, which is nice if one person uses the toilet while the other washes hands, for example; but the door to the toilet closes shut on its own whether you like it or not, leaving the room dark. Sure, there is a light switch in there; but the room is bathed with natural light during the day — and it just would have been nice to save a little on energy. I know — that especially means nothing in a city such as Las Vegas which probably has its own light bulb industry. You can probably also find something to prop the door open.

The enclosed shower area has no shelf to place toiletries — or on which to put a body part while showering. That was irritating to me.

I regretted not bringing my bathing suit — until I saw just how crowded was the “beach” area. It was far more crowded than in the photographs on the official Internet web site of the Mandalay Bay Las Vegas hotel property. I simply cannot stand crowds and avoid them whenever possible.

I did dine at the Bayside Buffet restaurant for dinner, where king crab legs are amongst the many food items of which you can eat as much as you like for approximately $35.00; but although the food looked good, I found most it to be edible with little taste. I know it was not my senses, as I dined on a catered lunch with far more delicious food within the hotel property during the day before.

The resort fee is $28.00 per day and includes the following hotel services:

You probably know by now how I feel about resort fees; and in my opinion, most of those services listed above are bogus — although the speed of the Wi-Fi Internet service was definitely high speed. However, I must say that at least you are clearly warned about the resort fee during the booking process; so you are not surprised with it once you get to the hotel property.

In the interest of full disclosure, the room was paid for a conference of “bloggers” who write for BoardingArea; so I neither paid for my room nor do I know what was the room rate that was paid at that time.

Overall, I would recommend staying at the Mandalay Bay Las Vegas hotel property — but only at a low room rate, as you will be socked with a resort fee of $28.00 per day. If you believe that the total room rate is excellent — even with the resort fee and taxes included — then book the room and enjoy your stay in Las Vegas.

Resort fee of $28.00 per day
Elite level status not fully recognized due to a blunder
Buffet dining option expensive and the food had little flavor
A long walk from the central location on the Las Vegas Strip

Stay at the Mandalay Bay Las Vegas hotel property only if you can secure a low enough room rate, as you will be socked with a resort fee of $28.00 per day. If you believe that the total room rate is excellent — even with the resort fee and taxes included — then book the room and enjoy your stay in Las Vegas. The value rating shown below is based on a room rate of $72.00 per night; and I would not consider paying much more than that.