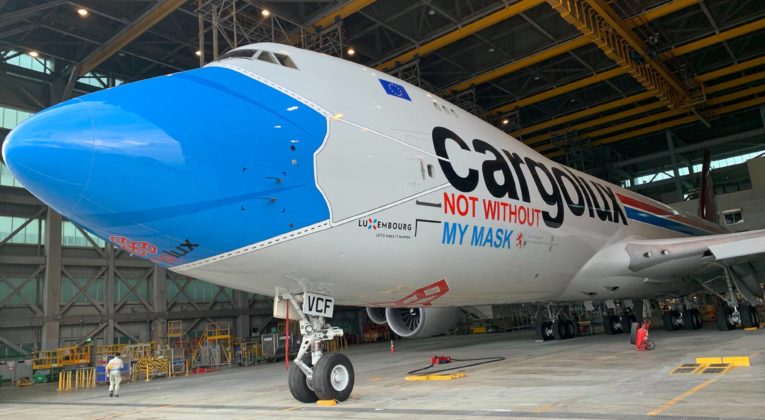 Although some airlines design surprising aircraft liveries, Most liveries are quite straight forward. They include the logo and name of the airline and sometimes a slogan. But did you know that British once owned a Boeing 747 in Star Wars livery? European cargo airline Cargolux recently also introduced a surprising look of their Boeing 747 aircraft.

Cargolux actually doesn’t carry any passengers. On the contrary, it is a cargo-only airline from Luxemburg. The airline started in 1970 with a fleet over Canadair CL-44 cargo planes. A mere 50 years later, Cargolux grew to become the biggest cargo airline in Europe. The fleet has changed as well. Currently, there are 14 Boeing 747-4 and 16 Boeing 747-8 aircraft with an average age of 11 years. To celebrate its 50 year anniversary, Cargolux introduced a special livery.

Apparently, the airline wasn’t just inspired by its anniversary when it designed the new livery. The COVID-19 pandemic also influenced the design. A Boeing 747 was send to Taipei for a special paint job. The 747 now wears a face mask.

The face mask symbolizes the airline’s commitment in the fight against the COVID-19 virus. But the 747 didn’t only receive a mask. On the side of the plane you can find the text ‘Not without my mask’. The airline clearly makes a statement on the use of face masks. The aircraft is registered under LX-VCF and can be tracked using FlightAware.

Cargolux has another Boeing 747 with a special livery. The LX-NCL has received a retro livery. This design is also introduced to honor the 50th birthday of the airline.

Most passenger airlines currently phase out their Boeing 747 as it is too big and not efficient. Some of those passenger aircraft may continue their career as a cargo carrier.