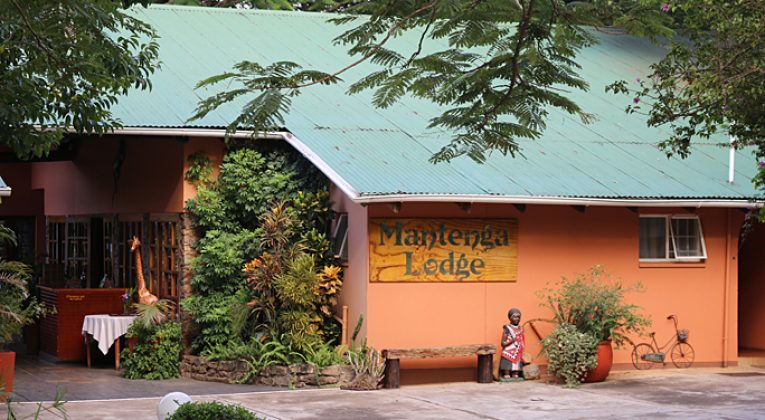 After several hours of driving from Durban, I began searching for a way into Swaziland. I had originally planned on going through the Emahlatini border crossing near Houdkop; but the paved surface of Theo. Mocke Street in Piet Retief to get there ended not long after it began — and there was no way I was driving a rental car on an unsealed road. I turned around and continued north on Highway 2 and then onto highway R33.

I headed east on highway R65 towards the Nerston border crossing; and the closer I was to Swaziland, the more it seemed as though time forgot about highway R65, which on either side was overgrown with tall weeds and pocked with rutted pavement and my dreaded nemesis: potholes.

I finally arrived at the Nerston border crossing — only to find the gates closed. A lone guard emerged to let me know that the Oshoek border crossing further north was open.

I then realized that it was a good thing I did not attempt to drive on 20 kilometers of dirt road on a drizzly night, as the Emahlatini border crossing was most likely closed as well…

…so I ventured further north on Highway R33 to Highway 17 — which is more of a main road — and headed east to the Oshoek border crossing, which was indeed open. I went through the whole rigmarole of gate passes and customs and passport checks and stamps before finally heading east down highway MR3, which is the main east-west highway in Swaziland.

By this time, a thick fog rolled in; and despite being equipped with street lamps along the entire stretch of highway all the way to Mbabane, only sections of the hilly and curvy highway were lit. The fog was so thick that I had to catch each reflector embedded in the road to figure out which way I was going. Fortunately, there were only a few other vehicles on the entire highway.

After passing through central Mbabane on the highway, I drove down this long descent — curving this way and that way — until I turned off at the first exit after that long stretch of hill. I then proceeded south on route MR103 for several kilometers — and thankfully, I saw and followed the signs for Mantenga Lodge. I passed a small shopping area — which included a place to exchange

It was already after midnight — shades of Katse Lodge in Lesotho in terms of arrival time — and I was once again concerned that I would be locked out again.

Not this time. The guard at the gate let me in so that I can park the rental car. He escorted me to my room and opened it. He then handed me the key, which had a carving attached to it. I found out the next day that I can purchase one, as they are available for sale at the front desk in the lobby at the entrance to the property. I purchased one for 20 lilangeni — equivalent to less than $1.50 in United States dollars — as an authentic souvenir, as they are carved by hand locally.

Not long after he left, I took photographs and fell asleep from arriving so late and driving greater than 500 kilometers.

There were few times in my life when a bed — any bed — was more inviting than they were when I walked into the room at Mantenga Lodge. I probably could have slept on a burlap sack of straw like I once did in Côte d’Ivoire…

…but the twin beds in the room appeared to be — and, in fact, were — rather comfortable; and the room was clean.

Upon both my first glance and lasting impression, I really liked this room. It was distinctly African; but not slovenly or decrepit. The right combination of rustic yet cozy are the terms I would use to describe it.

The work area consisted of a desk, on which sat a device to prepare coffee — along with packets of complimentary sugar, artificial creamer, tea and coffee — and a guide to Mantenga Lodge.

The closet area was comprised of an armoire. Two remote controls were available at bedside: one for the climate control unit; the other for the television. Satellite programming was available if I wanted to watch television — I passed on that — and complimentary access to the Internet was available through Wi-Fi.

Although I liked the fan attached to the vaulted ceiling above, the temperature of the air in the room was perfect where I needed neither air conditioning nor heat; and I did not use the ceiling fan.

The sliding door on the right of the work area leads to the bathroom.

From the sliding door to the layout, this bathroom was more on the unusual side. The counter of the vanity became a shelf which defined the shower area.

Amenities in the bathroom included two packets each of soap and shampoo.

I awoke the next morning and opened the curtain which was adjacent to the bed. Glass doors led out to a wooden deck which overlooked the lush green foliage, speckled with color from the occasional flower. Off to the left through the woods was a glimpse of a swimming pool.

Of course, these were the views from my room — and I really liked them — but a walk to the area where breakfast was served awaited more surprising views.

A whimsical statue of a giraffe stands guard at the entrance of the area where breakfast is served.

Although not exactly the best I have ever experienced, the selection and quality of food at the breakfast buffet was decent. Assorted juices and fresh fruits were available. The baked goods were good; but they were not fresh. In addition to the selections available from the few chafing dishes — such as diced potatoes — hot food included fried or poached eggs and assorted omelets which can be prepared as per your order.

I had a choice of dining either inside the restaurant or out on the expansive deck. The weather was perfect for dining outside, where I was welcomed with an incredible view of Execution Rock and the gently rolling hills surrounding it. I sat at an empty table, mesmerized at the view.

A server occasionally came to check up on me if I needed anything, which I did not.

Breakfast is available from 6:00 through 10:00 in the morning; and it was included with my room rate.

I did not try the food in the restaurant during lunch or dinner hours.

The Exterior of the Room

Rooms were in their own separate buildings — similar to cabins — and situated above ground on stilts in a serene setting which offered a sense of privacy.

All of the photographs shown above are of the room in which I stayed.

The Grounds and Views of Mantenga Lodge

Peaceful, quiet, calming, beautiful, lush, green — those were some of the adjectives which I had thought when I walked around the grounds of Mantenga Lodge. Even the area to park a car had a wonderful view.

Only 38 rooms comprise Mantenga Lodge, which is located approximately three kilometers south from highway MR3 in the Ezulwini Valley — meaning Valley of Heaven — on the outskirts of the capital city of Mbabane in Swaziland. If you want a souvenir created locally, there are a number of places from which you can choose to patronize — some of them within walking distance.

Members of the staff were warm, friendly, welcoming and helpful.

The total room rate of $46.96 was an absolute steal — I booked my reservation through Expedia, as the current official Internet web site of Mantenga Lodge did not exist at the time — and it was completely worth every penny. This is the first time I have given a perfect score for value at a place where I stayed for the night.

The quality and selection of the food available at breakfast and the quirky layout of the bathroom in the room were the only impediments which prevented my stay at Mantenga Lodge from being as close to perfect as possible.

If you find yourself in Swaziland, definitely consider staying at Mantenga Lodge. I highly recommend it, for if I could have stayed another night, I would have done so without any hesitation whatsoever.

Service from the staff is above average
Incredible views
Comfortable bed
Peaceful and quiet setting
Excellent value for the money
Convenient to shopping — especially for souvenirs — as well as the main highway, petrol station and a place to exchange currency at a great rate

Quirky layout for the bathroom
While not bad, the food available at breakfast was unimpressive

The quality and selection of the food available at breakfast and the quirky layout of the bathroom in the room were the only impediments which prevented my stay at Mantenga Lodge from being as close to perfect as possible — and I am nitpicking with that criticism. If you find yourself in Swaziland, definitely consider staying at Mantenga Lodge. I highly recommend it.