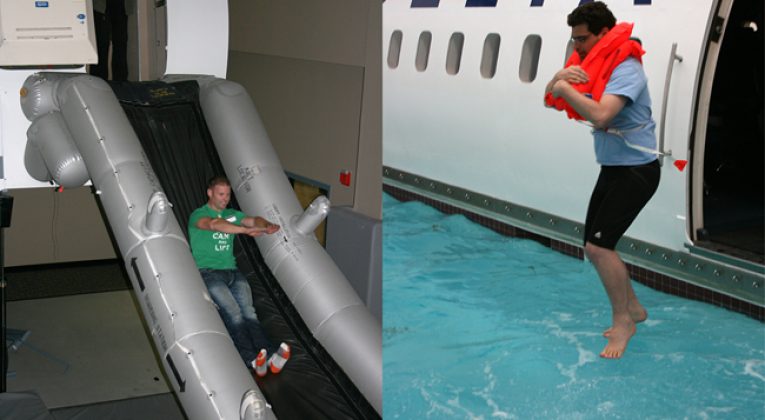 The crash landing of a Boeing 777-31H airplane — which operated as Emirates Airline flight 521 and carried 282 passengers and 18 members of the flight crew from Thiruvananthapuram to Dubai — at approximately 12:45 in the afternoon on Wednesday, August 3, 2016 served as a reminder that passengers should not take any time or effort to retrieve their belongings during an emergency situation.

“The aircraft however did not climb, but after retracting the gear touched down on the runway and burst into flames”, according to this article written by Simon Hradecky for The Aviation Herald. “All occupants evacuated via slides, 13 passengers received minor injuries, 10 were taken to hospitals, 3 treated at the airport. The aircraft burned down completely. A firefighter attending to the aircraft lost his life.”

This video by Keith Walker shows passengers taking their bags along with them as they evacuated from the airplane, which was completely destroyed by the time the fire was extinguished.

Whether any of the aforementioned 13 passengers were injured as a result of inconsiderate fellow passengers evacuating the aircraft with their belongings has not yet been determined at this time; and that no one — other than that one firefighter — was killed in this incident was a miracle in and of itself.

1. Even One Second is Too Precious to Waste. If every passenger on this airplane took only one extra second to grab their personal belongings before evacuating an airplane which is on fire, that would be 282 seconds collectively — that equates to 4.7 minutes — of time you do not have to escape from a dangerous situation which could cost you and other passengers and members of the flight crew your lives…

…and if the airplane is on fire, then oxygen becomes more precious as well — and staying on the airplane any longer than necessary needlessly uses up oxygen which could literally save the lives of others who leave the aircraft later than you.

We all know that collecting your personal belongings takes significantly more time than one second — and again, multiply that by 282 in this particular incident.

Please — get off of the airplane as soon as humanly possible.

2. Carrying your belongings can slow you down upon evacuation. Assuming everyone is carrying their belongings with them, everyone still has to exit via the evacuation slide, as the fuselage of an airplane is typically too high off of the ground to jump or otherwise exit. Carrying belongings can slow each person down — starting with getting into position to jump and then slide while maneuvering how to hold your belongings to ensure that you have the proper balance to slide down as fast as possible.

As has already been said, even one second is too precious to waste — and although you might get yourself to safety, other passengers and members of the flight crew have a right to reach that safe haven as well.

3. Injuries increase when carrying your belongings. Injuries typically occur when people use evacuation slides during an emergency — for example, a slower person can be injured by being hit by a person behind him or her sliding faster. The slides are steep and designed for the quickest egress from a dangerous incident. Add baggage and belongings to the mix and the likelihood of injuries — or even deaths — exponentially increases.

Imagine suddenly being hit in the head by a wayward bag speeding down the evacuation slide which is heavy and hard, as that can cause serious injury and potentially kill you.

4. Evacuation slides are inflated — which means that they are filled with air. Although they are constructed of a durable material, all it takes is one sharp object to puncture the evacuation slide. Voilà — the other passengers suddenly cannot evacuate.

5. Water ditchings can be even worse. Attempting to carry your belongings during a water ditching — in the unlikely event where an airplane crash lands in water — is even worse. You will be wearing an inflatable life vest, which you do not want punctured should you need it to help keep you buoyant…

Although predicting what you will do in an emergency situation can be difficult — as it is possible that you might react differently and unexpectedly than the way you think you will otherwise react — it is important to remember that your belongings can always be replaced; but your life cannot be replaced. Is retrieving that portable electronic device really worth sacrificing the life of someone?

Keep important items in your front pants pockets or otherwise on your person at all times — such as a mobile telephone, credit cards, passport and cash to name a few items which will not impede upon evacuating from an airplane in any way whatsoever. Do not keep anything in your back pocket, as that is one of the parts which will be in contact with the evacuation slide.

Burning up precious time for your safety and ensuring that your belongings are also safe is purely selfish and thoughtless, as that is time spent which could literally save lives — including yours.