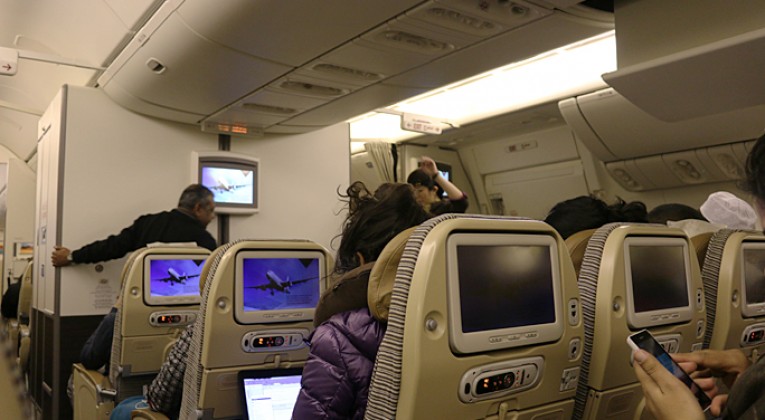 I have heard good things about Etihad Airways; and this is the first time I fly on an airplane operated by that airline as a passenger. I walked up to the counter at the gate in Terminal 4 of John F. Kennedy International Airport in New York when it opened and had absolutely no problems checking in for my flights to Johannesburg via Abu Dhabi. I received my boarding passes within minutes. I then went to sit down in a chair at a gate opposite the one being used by Etihad Airways.

Although passengers were being boarded by zones aboard what became a full economy class cabin inside of the Boeing 777-300 aircraft operated by Etihad Airways, there was a long line to board anyway; but it moved fairly quickly.

I then approach my seat; and some goodies were awaiting me.

The seat was reasonably comfortable; although the flat cushion of the seat could use a little more padding. I was not exactly thrilled about the angle of the lower half of the seat. It reminded me somewhat of the seat I experienced on an airplane operated by Alitalia several months ago during my unintentional trip around the world — yes, I still have more trip reports from that trip to post — but it was not nearly as uncomfortable.

I then noticed the back of the seat in front of me. I was pleased that it was equipped with many features, as explained in the captions of the photographs below.

I did not like the tray table because items kept sliding off of it for some reason. I was unsure why. Could it have been the angle when it is completely opened flat? Was the surface too smooth? Whatever was the reason, the tray table was not convenient to use.

The first meal then arrived. Before I began this trip, I looked at the special meal options offered by Etihad Airways; and among the choices was seafood. Yes! It has been a long time since I had last seen that meal option; and I had the forethought to order it before my trip.

Here is the printed menu with a choice of three meals for passengers seated in the economy class cabin; and all meals are prepared to conform with Halal dietary laws:

This is how my meal was presented to me — and I apologize in advance for the poor lighting conditions:

I then unwrapped everything…

The salmon was moist yet flaked nicely. I would have liked to have a crusty roll with the smoked salmon, which was slightly tough but good. A few sprigs of the bed of greens on which the smoked salmon rested were turning brown; but that would be my most significant criticism of this meal.

Somewhere over the United Kingdom halfway during the flight, we received a paper bag which contained this:

It was purportedly a turkey sandwich.

The roll was far more appealing to me; so I scraped out whatever was inside of the sandwich and ate the roll.

There are many options with the in-flight entertainment system — so many that because I fell asleep during much of the flight, I was not able to try them all. One thing I did like was that there were two cameras with live feeds of the outside during the flight which you can watch.

Here is a view of mountains covered with snow somewhere between Yerevan and Baghdad from the Landscape Camera:

Being assigned to an aisle seat, I thought this was pretty darn cool. This does not, however, replace the actual view from a window seat, as I have expressed my thoughts far more clearly here pertaining to windowless aircraft.

The final meal came 90 minutes before the conclusion of the flight. Again, it was a special seafood meal. This is how my meal was presented to me:

I then unwrapped everything…

The meal did not look very appetizing at all; but do not let the appearance fool you — the meal was far more delicious than it looked. There was a moderate heat in the spice of the meal; and the tomato and other flavors were quite full and rich. The fish was in large, moist chunks; and the bland rice complemented the flavorful stewed vegetables well.

I wrote in the caption to the above photograph that the meal came with an American KitKat chocolate bar because everywhere else in the world, KitKat is by Nestlé; but for some reason, KitKat is by Hershey’s in the United States. I have heard people prefer the Nestlé version over the Hershey’s version.

It was nice to see the connecting gate information.

When the lights were dimmed aboard the airplane, mood lighting bathed the interior of the aircraft with a glow of color.

The mood lighting was at the windows in addition to the ceiling.

If you plan on being a passenger in the economy class cabin of an airplane, my first experience suggests that Etihad Airways is a top choice. One other tip: although the other meals appeared to be all right, choose the seafood meals in advance. I was glad I did; and I highly recommend you do the same.

Economy class cabin was full of passengers
Aisles were quite narrow
Flight attendants not as warm or friendly as on some other airlines
Difficult to keep tray on flimsy split tray table
Plastic cups and other refuse not collected in a timely manner by members of the flight crew, causing them to pile up at the seat
No direct way to connect your portable electronic device to the in-flight entertainment system unless you have the obsolete EmPower cable
USB port at the seat did not seem to be in operation
Must have an adaptor to plug the two-prong jack from the headphones into your portable electronic device.
Long lines during boarding process
Sandwich during the flight was not very good
No options other than juice, soda, water and one snack item during the long flight when hungry or thirsty between meals

The economy class cabin aboard airplanes operated by Etihad Airways is one of the more superior products being offered in commercial aviation these days. All in all, I enjoyed my experience as a passenger aboard Etihad Airways. While I did not exactly cavort in The Residences or Apartments or anything like that — this aircraft was not equipped with them anyway — this is one of the better economy class cabins I have ever experienced.

Between the in-flight entertainment, the amenities and the meals, there is certainly enough to keep a person busy on a flight whose duration was greater than eleven hours — that is, if the person does not fall asleep.