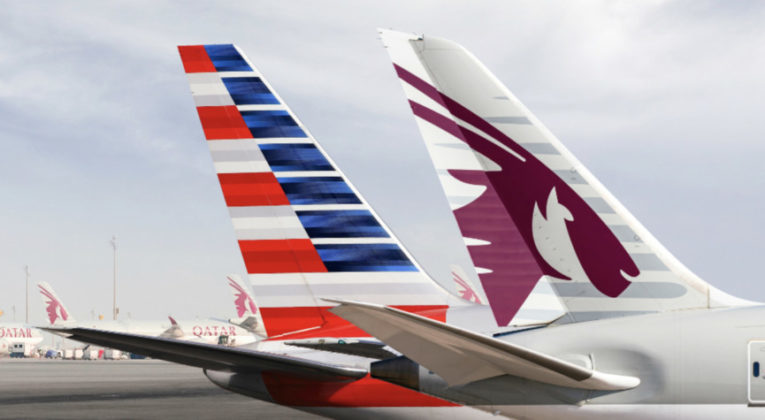 American Airlines has announced it will resume their codeshare with Qatar Airlines—again. The codeshare was already there but was halted in 2017. Now it is being restarted. This is good news for Qatar as we recently wrote about their new codeshare agreements with Deutsche Bahn and China Southern. Qatar won the Skytrax Airline of the Year Award for 2019.

Airlines regularly announce new partnerships often in the form of a codeshare. American Airlines and Qatar Airways are already together in the oneworld Alliance. But that does not mean that there is a codeshare agreement by definition. As a rule, the fact that both airlines are members of the same alliance means that the frequent flyer programs are coordinated with each other. For example, your elite status from American Airlines is also valid with other airlines within oneworld.

Codesharing is when the “code” is shared. This means that airlines sell each other’s flights under their own code. An example is that flight AA001 from American Airlines is also sold by Qatar under QR001. The code “QR” is then added to “AA”. With a codeshare, there are also agreements about how the revenue is distributed. This way both airlines benefit from selling each other’s flights. For the travelers benefit the network of destinations is growing.

American Airlines passengers can now book tickets on all Qatar Airways flights between the United States and Qatar. And also on to destinations in the Middle East, East Africa, South Asia, the Indian Ocean and Southeast Asia.

Qatar Airways was a codeshare partner with American Airlines until 2017. American Airlines halted that partnership because Qatar was accused of unfair commercial practices. According to both airlines, these accusations have now been settled and their partnership can resume. Last year, Qatar threatened to step out of oneworld because of these allegations. How and why the #makeup was not disclosed.

“The past is behind us and we look forward to working closely with American Airlines to build a world-leading partnership for all our customers. This agreement will bundle our complementary strengths and resources and offer more customers the opportunity to win the award-winning experience the quality of Qatar Airways “.

“The aspects that led to the suspension of our cooperation two years ago have been dealt with and resolved.”