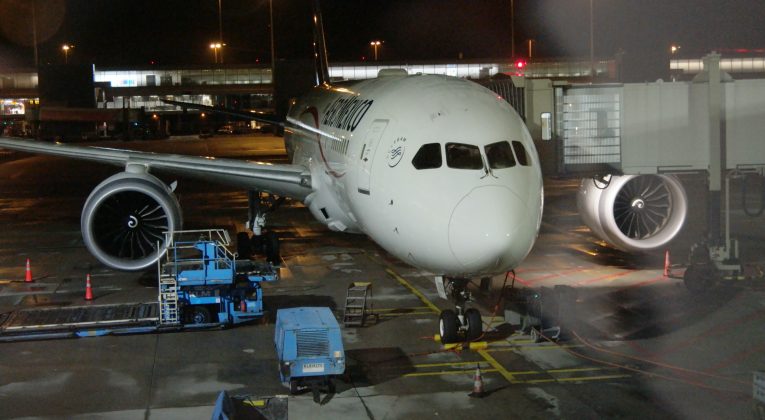 This article was published first on Insideflyer.nl

On May 30th, Aeromexico commenced flights between its home base Mexico City and Amsterdam. The arrival of the Mexican carrier made Amsterdam’s Schiphol Airport the hub with the most Skyteam carriers globally. After an initial schedule of three flights per week, the carrier announced it will gradually increase the frequency to daily in 2017. Insideflyer.nl got an exclusive peek inside the Boeing 787 Dreamliner of the Mexican airline at Schiphol.

Aeromexico flies on Monday, Thursday and Saturday from Amsterdam as AM26 to its hub Mexico City. The flight departs at 22:35 with an arrival the following morning in Mexico-City at 04:10. This enables connections to various destinations in Mexico, Latin America and the United States.

The Business Class (or Clase Premier) in the 787 consists of 32 seats in a 2-2-2 layout. Unfortunately, there is no direct aisle access for each passenger and limited privacy. The seats are divided into two sections with 24 between the first two doors and a mini cabin between door 2 and Economy Class with only 8 seats. The seats are electronically adjustable and, as is the norm nowadays, fully flat. Legroom is good.

It is important with this seat type to mention that the foot cubby in full flat mode can be tight, depending on your length. This is not the case however in the first row and in the mini cabin, where you don’t have a seat in front of you. These seats are recommended!

Passengers also have a USB port and powerplug at their disposal. The screen for the entertainment system measures 13-inch, not very large. Some aircraft feature wifi, however this is not yet guaranteed fleet wide.

A thoughtful touch are personalized cards for each passenger, which the crew writes prior to the flight and are placed on the seat before boarding.

The Economy Class has 210 seats, divided over two cabins. The layout is the standard 3-3-3 for the 787. All passengers have their own 11-inch touchscreen monitor for the entertainment system. The screen also boosts a USB port to charge your gadgets.

The seat pitch is 32-inch, which is above the industry average and definitely noticeable! I tried the seats myself and was pleasantly surprised. Measuring 1.95m, I still had a good amount of legroom. This was a clear difference from KLM’s 787 where my knees touched the seat pocket in front of me. The seat width is equal to KLM’s product and about average.

Looking for even more legroom and access to priority services? Then you can choose to upgrade to AM Plus. AM Plus consists of the first couple of rows of Economy Class and offers an additional 4 inches of legroom. Passengers may also use priority check-in and boarding on the ground. On arrival, you can be one of the first to leave the airplane and your baggage arrives quicker with a priority tag. The inflight service is the same as in Economy (including free alcohol!). On domestic flights, the surcharge starts at $22. On international flights prices start from $50.

You can select a specific seat online beforehand for a surcharge if you have a Economica or Clasica fare with ‘Seat Choice’. Here you can also choose a seat in the exit row. Passengers with a flexible ticket and Club Premier Platinum and Titanium members can select seats free of charge.

During (online) check-in you can select a seat free of charge.

Do you already have an Economy ticket but would you like to fly Business Class? There are various possibilities to upgrade to Clase Premier. Before your flight, you can bid for an upgrade online. On the day of departure you can also ask at the counter if there is availability. Prices depend on your economy fare.

Other destinations for the 787

Besides Amsterdam, Aeromexico also flies the Dreamliner to Madrid, London and Paris in Europe as well as Santiago, Tokyo and Tijuana. New York and Los Angeles (seasonal) are destinations in the US.  The airline’s 787-9, which are delivered from mid-October, feature a brand new Business Class product. The seats are the reverse herringbone style in a comfortable 1-2-1 set up. These seats are often regarded as the best seats in Business Class. In the weeks after delivery, the first aircraft will alternate between London, Madrid, New York, Paris, Santiago, Shanghai, and Tokyo. Eventually, Aeromexico’s bigger Dreamliner is scheduled for services between Mexico-City and Tijuana, Madrid, Paris and New York. Inaugural dates and frequency vary by destination.

Ralph, a.k.a. The Flying Dutchboy, previously had his own eponymous blog but is now an Editor for InsideFlyer.NL, focussing on aviation and airtravel news. His goal is to maximize air travel and hotel overnights and make travel as luxurious as possible through his knowledge of points, miles and elite status.