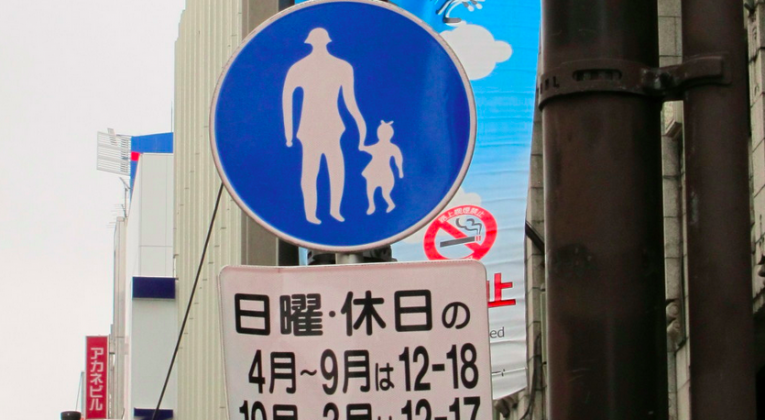 I love funny travel signs. Sometimes they’re a product of a phrase that has been lost in translation, and sometimes they just don’t seem to make sense. Often spotted in countries when I’m focused on how to get somewhere or make a meal choice, they give me a chuckle or put me into a full laughing fit. Here are a few hilarious ones to hopefully bring a smile to your face.

While waiting to cross a street near the Park Hyatt Tokyo, I came across this gem. I think it is a crossing sign and the little girl silhouette looks sweet with her bow and dress, but the oddly misshapen man(?) appears to have a prosthetic hook hand, very large shoulders in relation to his tiny head and feet, and a bulge around his waist. Sort of a creepy looking guy, but hopefully a gentle giant just needing more time than usual to cross the street.

Oh, and the picture at the top of this page? It was on a menu at an airport restaurant in Myanmar. With “plane” rather than “plain”, they got the concept right. And very cheeky how they used a little dollar sign in place of the “S” in US.

On a train in Japan I was perusing the menu when I came across an offering of “sandwitches”.

It immediately made me think of flying broomsticks and a witch that loves the beach.

While staying at the Radisson Blu Scandinavia Hotel in Oslo, a sign in the corridor caught my eye. It started out very helpful, reminding people that in case of fire it is important that they not use the elevator and instead to take the stairs.

There are pictures on the right to assist with the message, showing flames and an elevator of people that are crossed out.

Here’s where it gets hilarious. The bottom right picture shows two men using the stairs, but they are confused, running in opposite directions – one down the stairs and one running up!? There’s a fire? Wait! Panic! Everyone should just run!

What funny signs have you come across while traveling?