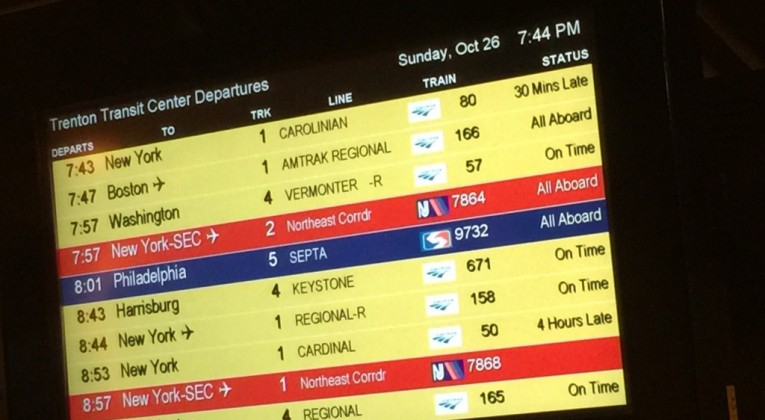 Traveling Amtrak in the Northeast Corridor of the United States can be a blessing compared to the hassles of air travel, and in many cases, it beats flying every time. Amtrak is the forgotten step-child of travel, and is pushed to the side, often in favor of more reliable service such as the US Airways or Delta Shuttle.

While those services are certainly convenient, they come at a price tag, both in monetary value, and productivity.

Flying from Washington Reagan airport to either La Guardia or JFK takes just about an hour, wheels up to wheels down, depending on the direction and conditions. While you still need to go through security, the Shuttle flights tend to allow boarding right up until departure, and ticket purchases via kiosks at the departures terminal. With an hourly schedule, you’re able to arrive in New York a short while later, though still need to make your way into the city itself, either by subway, railroad or cab. Fares hover between around $200-800 for a round-trip on the sub-500 mile route, though you can save money by flying into JFK (keep in mind that less regional flights fly here, though), and by purchasing well in advance. Onboard amenities include complimentary drinks as well as a paid wifi service if you subscribe.

Travel on Amtrak’s Acela Express, their “high-speed” service, clocks in at around 2 hours, 45 minutes, door to door, departing Washington Union Station, and arriving at New York Penn Station. Via their regional service, you’re looking at about a 3.25 hour ride. The high-speed service runs between $100-300 each-way, and their regional, slower service can sometimes carry a price tag as low as $30, which you can find several times throughout the year, or on ungodly hour morning departures.

What makes the train better? There’s no security and check-in process. Simply bring your ticket with you on your Smartphone, or print it from a kiosk and you’re good to go. Because bags stay with you, there’s no checked baggage process, and you’re able to board directly from the gate or station platform. Onboard, there’s free wifi so you can stay productive throughout the journey, and also, you have the convenience of using your cell phone.

Taking the train puts you door to door, right in the center of the city, where flying has many moving parts that could delay your journey at any point, and put you in major traffic. Because trains don’t have to go through an air traffic control process, there are less “on the ground delays,” and if you’re traveling between Washington and New York, Amtrak owns the tracks, and isn’t often delayed by passing freighter trains, which a struggle for points south, and in the majority of the rest of the country.

If staying productive is important to you, you’ll actually find traveling by train better, since you can stay connected throughout the trip for free – which is important to both leisure and business travelers alike. With city center to city center routing, you save the hassle of fighting rush-hour traffic escaping the airport, and the sometimes endless lines at security check-points, sometimes even for passengers lucky enough to have Pre-Check.

Jamie Larounis is an avid traveler, blogger and miles/points educator. Traveling well over 100,000 miles a year and staying in hotels for over 100 nights, he leverages miles, points and other deals to fly in first class cabins, and stay in 5-star hotels. He shares his experiences, musings, reviews, tips, tricks, resources and industry news with you, the fellow traveler. Jamie also supports the Frequent Traveler University, a Frequent Traveler Education Foundation project, as a member of their organizing staff. Among several media spotlights, he's written for InsideFlyer magazine, USA Today and makes regular appearances as a featured expert discussing the travel industry on FOX News.