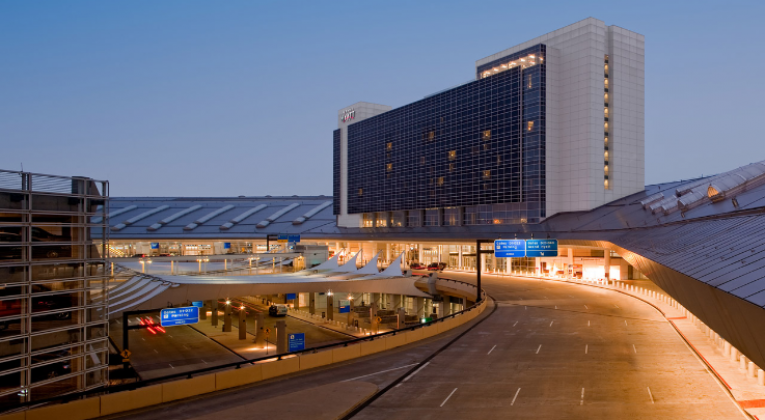 Since I started a new job in May, my travel has been way down. Moving from a position that allows almost 100% of the work to be completed remotely to a position that runs 8am-5pm, Monday-Friday, is a huge shock to the system. Though longer trips are out of the question for now, I have had a couple of opportunities to escape on the weekends. On this most recent trip to Dallas, our plans were centered primarily around the airport area, thus making one of my favorite Hyatt properties, the Grand Hyatt DFW, the best option. I made the reservation less than two weeks before the stay and though unable to book a cash and points rate, I was able to use one of my Diamond Suite Upgrades (DSU) to confirm into an Executive Suite.

“Thanks” to a weather delay, our flight from Kansas City landed in Dallas just under four hours late. Plans to visit the Centurion Lounge for dinner were shot, so we rode the SkyLink to Terminal D and within minutes were ascending the escalators to the lobby of the Grand Hyatt. There was no wait to check in and the agent on duty (Holly) cheerfully welcomed us.

Holly confirmed that a rollaway had been delivered to the room, setup our 4pm check-out and informed us that the Diamond breakfast benefit covered an entrée and drink for up to four people. With most of the menu items running in the $15-$18 range, this is an incredible value. What’s even better is the fact that you can take advantage of the meal in the Grand Met restaurant or though room service!

My DSU confirmed a the Executive Suite, a 670 square-foot room, on the 6th floor. Offering views of the Terminal D ramp and runways, I could’ve spend a considerable amount of time in the room plane spotting. Entry to the suite was made through the living room, which offered a decently sized work desk, large couch, leather chair and round ottoman and a flat screen TV. The living room also offered two oversize windows with excellent views of the airport operations. As it was quite late when we made it to the room on Friday, most flights had already gone.

The following morning, however, provided great opportunities to see a variety of aircraft.

The second room of the Executive Suite was setup like a traditional king guest room similar to the standard rooms at the Grand Hyatt. A solid door separated the two rooms, which is perfect if people are sharing the room and wish to have some privacy. As an added benefit, the door blocked any noise from the hallway, allowing for plenty of noise filtration.

Both rooms contained an electronic touch panel that had controls for the lighting, privacy curtains and climate controls.

While some larger hotel suites have more than one bathroom, the Executive Suite contained just the one bathroom near the entry hallway. On the upside, it was quite spacious and contained a separate bathtub and shower.

The Grand Hyatt DFW offers a variety of items for breakfast, lunch & dinner in their Grand Met restaurant located by the lobby. Sharing the same space, the Grand Met Lounge is a full-service bar and even offers a decent sushi menu. Items are a bit pricey, though should be expected when eating at an airport restaurant.

While the hotel does not offer a Grand Club Lounge, Hyatt Diamond guests are provided with complimentary breakfast (for up to four people!). We were immediately seated and provided with breakfast menu’s on an iPad that contained detailed descriptions and photos for each food and beverage item. It was a tough decision, though I opted to order the Huevos Rancheros.

With three entrées, drinks, tax and tip, our breakfast would have cost $80.00, had it not been for the Diamond breakfast benefit. I am not a huge breakfast person, but thoroughly enjoyed my entrée and both of my friends had similar comments about their meals.

For an airport hotel, the Grand Hyatt DFW does a great job of offering comfortable accommodations for passengers looking for a clean, modern property. The fact they are connected to Terminal D is even better, as you eliminate the hassle of waiting for a hotel shuttle and having the plan the extra time in the morning to ride back to the airport. On my last trip to Hong Kong, I woke up an hour before boarding and was through security and to the Admirals Club less than five minutes after leaving my room.

The hotel definitely has a premium on their rooms, so unless you are staying on a corporate rate, don’t be surprised to see rooms going for $210-250/night. On this stay, there were three of us, I used a suite upgrade and we received the benefit of free breakfast, so the $220 we paid wasn’t too bad of a price when split three ways. When given the opportunity, I tend to book this category 4 property with cash and points (7,500 points + $100), rather than straight points (15K points/night), allowing the chance to use suite upgrades and earn points on the stay.

For a cheaper option, there is a Hyatt Regency on the airport property, though it is not connected to the terminal. I have spent a number of nights at the Regency and while it is a nice option (and cheaper), I still enjoy the modern style of the Grand Hyatt, the convenience of being connected to the terminal and the views from the rooms and rooftop pool.

A bit pricey, though the premium is often worth it

With the proximity to DFW's Terminal D, the Grand Hyatt is a great hotel for an airport layover. The Hyatt Regency DFW is a nice option, though the Grand Hyatt is more modern, offers better dining options and provides a large fitness center and rooftop pool for guest use.