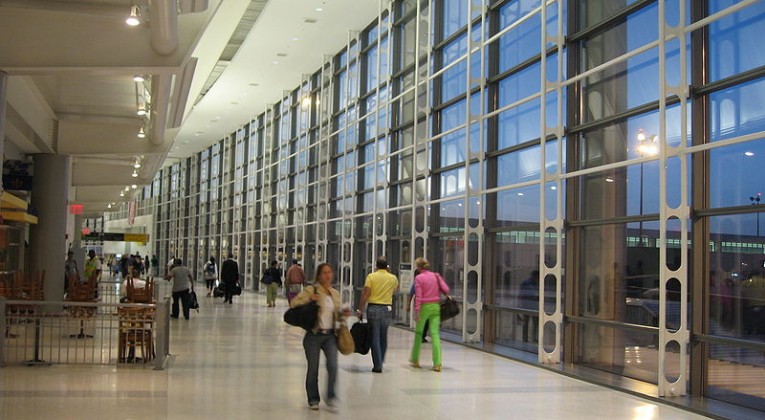 Since a lot of people are in the midst of booking travel for the holidays, I thought it might be useful to create a rundown of the best and worst hubs to connect in as you head to your final destination.

This is a loose list, based on 300,000 butt-in-seat miles on United alone, weighing the design and convenience of the terminal, options if you’re stranded and places to eat and wait for your flight. But I’ll try to highlight the strengths and weaknesses of each so you can make the right decision for you based on your preferences. I’ll be writing guides for American and Delta as well, covering the terminals these carriers use as hubs (vs. trying to evaluate the airport as a whole.

Stationed off on the west end of the country, United has a pretty smooth set up, operating domestic flights out of Terminal 3 and International flights out of Terminal G. These terminals are connected by an airside corridor, making connections to domestic or international flights a breeze. While parts of the terminal are under construction, there are a wide range of healthy food options (20+ restaurants), and the furthest gate from security (90) isn’t more than 10 minutes even during the most crowded seasons. Security is also operated by private contractors and the checkpoints in Terminal 3 and G both tend to move fast and efficiently.

The lounge options are also fantastic. The United Club in Terminal G is one of the nicest, a new one is going to open in the next few months and the Centurion Lounge is smack dab in the middle of it all.

There are several dozen hotels near the airport in case you get stranded and you can take the BART train into downtown if you want to break up your trip with a 23 hour layover.

While SFO does have weather delays, they tend to happen more in summer, with no chance of snow on the runway during the holiday season (unlike hubs in the Rockies, Midwest and Northeast). If you have a choice between LAX, DEN and SFO, San Francisco is the way to go.

On the other side of the country, United acquired a sizable hub at Newark when it merged with Continental in 2011. Newark in many ways feels like a slightly more compact SFO, with a similar circular design with radial terminals. United operates out of the terminal C, and has two large clubs to choose from. There is an airside bus to the other terminals and a landslide train, making terminal connections rather fast (though connecting to some United Express flights or transatlantic partner flights can be a pain).

Food is also plentiful and diverse in Newark, with several food courts and outlets suited to a wide variety of tastes. In an effort to re-imagine the airport terminal, United also announced a partnership with OTG Management, with living-room style gate areas with tablets to order food and check flight information. It’s also about a 30 minute train ride into New York, so there are plenty of hotel options (and again, another good choice for a 23 hour layover).

In the South, Houston is generally a pretty good place to connect. Outside of summer hurricane season, you’ll rarely have a weather delay. United operates out of Terminals A, B, C and E, but thankfully they are all connected by an airside train. Terminal E is the nicest by far, boasting the one of the largest UA clubs in the system. There are also a lot of great food options, from CatCora’s Kitchen to Pappadeaux (plenty of southern cooking here).

Hotel options aren’t quite as plentiful as SFO or EWR and the airport is a hike from the city center. Some of the Terminals could use a renovation, but the airport is actively demolishing and rebuilding the ramshackle Terminal B for greener pastures.

While it can suffer from crippling weather delays, United’s home airport is well-connected airside, if you like to walk. Some of the treks from Concourse C through Concourse B (both in Terminal 1) to United Express operations in Concourse E (Terminal 2) can be a schlep and the food options in Chicago are lackluster (really Torta Frontera – with its $11 sandwiches – is about as good as it gets – I like Cafe Zoot at the center of Terminal C)

On the bright side, UA has recently renovated its lounges in ORD, though there are few other options. There are several airport hotels at rock bottom prices if you’re stranded and the Blue Line connects the airport into downtown Chicago.

International transfers are a bit of a pain, since you need to exit the secure area to take the train to Terminal 5, and believe me, the weather closures are epic.

United has a sizable operation at LAX and considers it a focus city, operating out of Terminals 7 and 8. These buildings are no-frills and have a limited set of food options (most uninteresting) which sets passengers to consider dining at the futuristic Theme Building in the middle of the airport grounds (which was overpriced and not very good before it closed).

While United has two clubs at LAX, they are sorely in need of updating (though you can escape to the Alaska Board Room in Terminal 6 via a tunnel). The gate areas aren’t terribly comfortable either since they’re wedged into fairly small spaces.

LAX is a perfectly reliable place to connect and it rarely suffers any kind of weather delays, but it’s not going to win any awards as a great place to hang out (unless you’re in the Tom Bradley International Terminal – which is gorgeous). If you do get stuck, the hotels tend to be of below average quality with shockingly high prices and fees. We’re rating it slightly below average.

When Denver built it’s new airport 20 years ago, people thought it was going to usher in a new era of mega terminals in the US. United primarily operates out of the Terminal B, which is one of the longest in the country.

Sadly, the terminals are huge, which means a lot of walking — AND trains between terminals AND bus gates. This is a terribly unfun place to spend any time, connections can be harrowing because you may be sprinting up to a half a mile and even if you have the time to explore, there isn’t much to see outside of the few exhibits at the train stops.

The food options are generally chains or greasy sandwich and barbecue places, making it a desert of healthy food. Try to escape to a lounge for better options and you’ll find one of the United Clubs updated, but the other is in shambles.

Furthermore, Denver is often plagued with snow delays… or wind delays (or sun delays?), making it a risk to connect on transcons (as are ORD and to a lesser extent EWR and SFO). If you do get stuck, you’ll think the hotels are in Wyoming given how far off the massive airport property they are (aside from the recently built Westin at the airport).

It’s also impossibly far from downtown or anything useful in Denver, so it’s not terribly easy to pop in for lunch or visit of friend — who will probably be secretly plotting your death if you make them trek all the way out to pick you up at this out of the way airport. Avoid if possible.

Wow, what a catastrophe of a hub. United operates out of the most distant Terminals C and D, which are an utter trek to get to from security. Either you take a train that drops you off considerably past the terminals (because they’re building a new one… eventually…) or you get to take a dizzying array of moon buggies to (maybe) get (kind of) close to your gate.

The United Clubs are old enough that the wood paneling was in style when they were built, chronically packed and are often considered some of the worst in the system. The C & D terminals themselves are low-ceilinged, cramped and also crowded. Despite the picture above, you nearly trip over people just trying to walk down the hallways. Food is more of an inconvenience than a necessity and no options stand out as anything resembling attractive.

The international terminals A and B have far better options, but again they are a train or moon buggy ride away and the Lufthansa Senator Lounge (which you can use as a UA gold or higher) is as far from the United gates as possible, so it’s often not worth the detour.

Lastly, Dulles is an utter trek out from Downtown DC. We’re talking almost an hour and that’s without the crippling traffic that DC is notorious for. Add to that a toll road, poor hotel options, still no train into town and some of the surliest TSA agents you’ll ever meet and Dulles ranks at the bottom of all United hubs to connect in. Stay away at all costs.

Hope this run down will help your holiday planning (or brace your expectations if you’ve already booked). We’ll be continuing this series with a rundown of the Delta and (newly combined) American hubs soon!