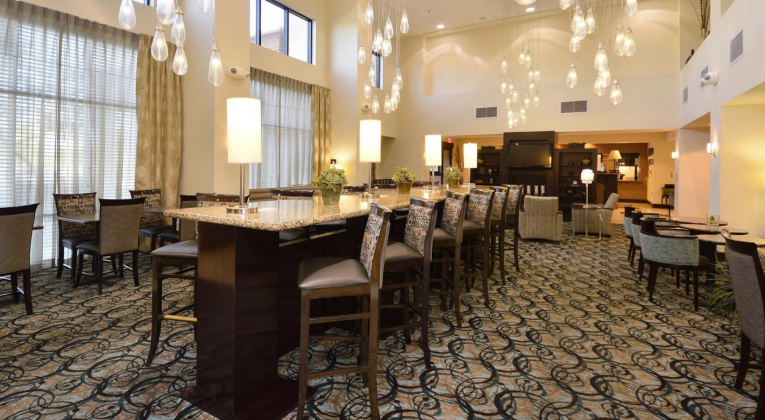 Part I is now, while Part II comes later.

It wasn’t pretty. We arrived at Las Vegas McCarran around midnight and called the hotel for a pickup. A grumpy front desk clerk told us, “It will be at least twenty minutes.” Sure enough, twenty minutes later, the driver arrived and took us the three miles to the hotel.

When we got to the hotel, we could see why the FDC was so grumpy. They had run out of room at the Inn, with one customer was standing in the lobby, waiting patiently for the on-call manager, who was nowhere to be found. A second traveler was arguing with the FDC, who wouldn’t let the man into a room, since his name wasn’t on it.* We waited a while and the clerk eventually got to us. To be entirely fair, he was perfectly pleasant with my wife, who was checking us in while I discussed “walk” protocol with the individual waiting for his room.

My wife is Diamond, so I’m guessing that they held a room for us in an oversold situation. There’s no guarantee about the quality of the room, though. The room itself was small and really could have used a good scrubbing. The HVAC unit appeared to be new, but it was so loud that we had to turn it off to get some sleep. The room was, in all other ways, entirely unremarkable.

The galley bathroom was tight, but it got the job done. The shower had decent water pressure, even though the rattling door felt like it might come off its rails. Oh, cups might have been nice to have in the bathroom.

One final note: This is an airport hotel and you will hear planes taking off. It gets very loud.

Since it’s a Hampton Inn, don’t expect much in the way of facilities, but what they have is more than adequate. There is a small pantry and business center right off the lobby, as well as an outdoor pool, for those so inclined.

I was only there a night, so my interaction was limited to the front desk clerks and airport driver. They were all perfectly friendly for us, but the clerk with whom we checked in seemed to have little time for others, particularly the individual who was being walked. The FDC also seemed unconcerned with his inability to contact the MOD.

The is the one area where being an airport hotel has an advantage. Since many people are only staying a night, and their goal is simply to be by McCarran, pricing get commoditized. Our room was $90 per night, providing excellent value for the money spent.

Overall, our stay got the job done, but not much more than that. The Hampton Inn Las Vegas Airport will probably not be our first choice next time we need an airport hotel.

*This customer eventually got access to the room. He called his friend, whose name was on the reservation, and the friend okayed letting him in. Does this seem a little shaky to anyone else?

You get what you pay for at an airport hotel, but there are a lot of them to choose from. The Hampton Inn Las Vegas Airport will not be our first choice next time we need to stay by McCarran.