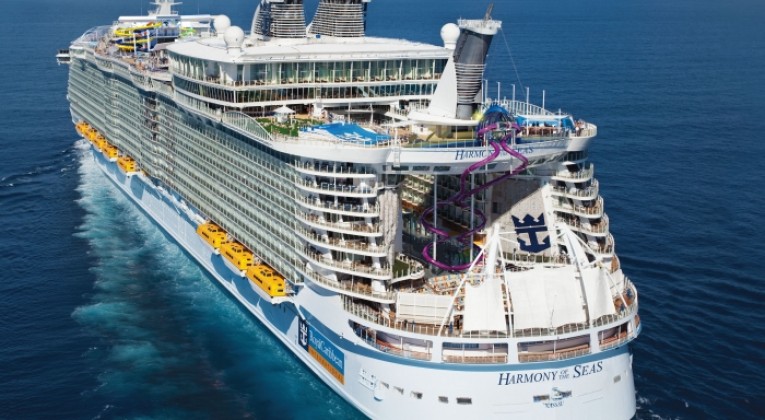 Harmony’s Royal Theater is a technologically advanced 1,380 seat venue that will host two headliner shows. Grease, the all-newstage production specially adapted by Royal Caribbean Productions, will will fill the Royal Theater with original choreography, costumes and aerial elements set to amaze cruisers and seasoned theater goers alike. The show will feature a soundtrack of favorites from the hit show that will no doubt have you singing along.

Royal Caribbean will also introduce a brand new original, Columbus, The Musical! According to Royal Caribbean, “the story recounts the imagined history of Marvin Columbus, Christopher’s fictional, down on his luck, distant cousin. Banished from his family’s kingdom, Marvin sets sail on a madcap voyage of discovery in the hopes of claiming his own place in history. Unforeseen romance and a “happily ever after” story are on the map as Marvin Columbus crashes into his Caribbean destiny. A breathtaking and revolutionary set design, transporting the audience across the Atlantic to the Caribbean, will awe the entire family and adults will thoroughly enjoy the smart, nuanced humor.”

The distinctive AquaTheater, a popular performance space introduced with Royal Caribbean’s Oasis-class ships sets a new standard on Harmony of the Seas. New capabilities and new shows will be a feature of the new venue. The Fine Line, designed as a 360° immersive entertainment show, will feature high-flying stunts and physically demanding acrobatics performed by some of the world’s best extreme sports athletes. Hideaway Heist will be a new family-friendly comedy dive show set in a 1950’s holiday resort promising entertainment for guests of all ages.

Ice shows are a staple of Royal Caribbean cruise vacations since the introduction of the Voyager-class, and they take a step forward on Harmony of the Seas. New ice performances will include 1887, another original Royal Caribbean production about love and adventure that begins in Paris on February 14, 1887. Another new show, iSkate Showcase, will be a Royal Caribbean ice show unlike any other where the cruise line’s skaters showcase their taking talents to their own favorite tunes.

Royal Caribbean’s signature Royal Promenade will continue with a tradition of hosting fantastic parties and parades with an updated twist as the 70s party so many love moves into the Totally Awesome 90s. Couple that with Let’s Celebrate! Halloween, Birthdays, St. Patrick’s Day, Valentine’s Day, Fourth of July and New Year’s Eve will all be celebrated at once, in what promises to be an unforgettable celebration and parade along the Royal Promenade.