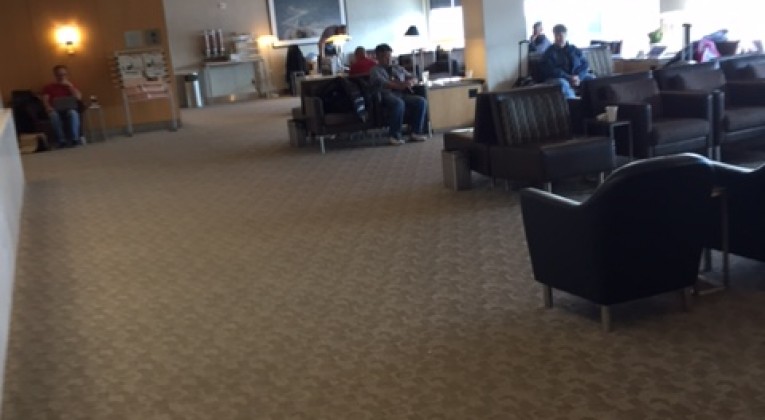 As one of the largest Admirals Club in the system, the lounge at LAX needs to be a good one. Fortunately, it is.

I visited the club on the morning/early afternoon of January 4 with my family. Due to a last-minute logistics change, we had three hours at the lounge and it went quickly. Note that I was on a domestic flight and did not have access to the Flagship portion of the lounge, so this review is about the main portion of the club.

This was a strong point for the club, as befits an international lounge. There are over 300 seats, two dozen work cubicles, eight showers and two business centers. Many of the individual seats had not only power ports at the seat but also stands with pre-programmed audio channels. Still, flying the Monday morning after school vacation meant that it wasn’t as easy to find a seat as it would normally be. There was also a wait for the showers, but the lounge staff moved quickly to get people in and out.

For those of you with kids, there is a large children’s room with three computers, games and a television. Again, because of the timing, there were numerous kids in the lounge. And to the parents’ credit, I did not see a single child misbehaving.

Adequate. The breakfasts are always the best of the meal services at the US lounges, and this one did well on variety. There was cereal, fruit, oatmeal and snack cakes, in addition to the coffee machine. We never did see a full lunch option, although we left at noon. By that time they had moved out breakfast and put in trays of veggies and dips, as well as crackers and cheese. Of course, there was food for sale and the standard bar.

I normally try to avoid the dessert items at the clubs, but the brownies were actually pretty good. Added bonus: the candy bowls by the service desk had a wide variety, rather than the standard hard candy.

Also strong. In a club this big, it’s hard to keep things clean all the time, but the staff did an excellent job of picking up random dishes and trash. The representatives at the service desk were friendly and helpful. I didn’t have much interaction with them but the passengers who did were walking away happy. With 4-5 agents always at the desk, there was rarely a line.

While the food selection may leave something to be desired, everything else was great.

The food and beverage selection is typical for a domestic lounge, i.e., mediocre

The Admirals Club at LAX is one of the best in the system.