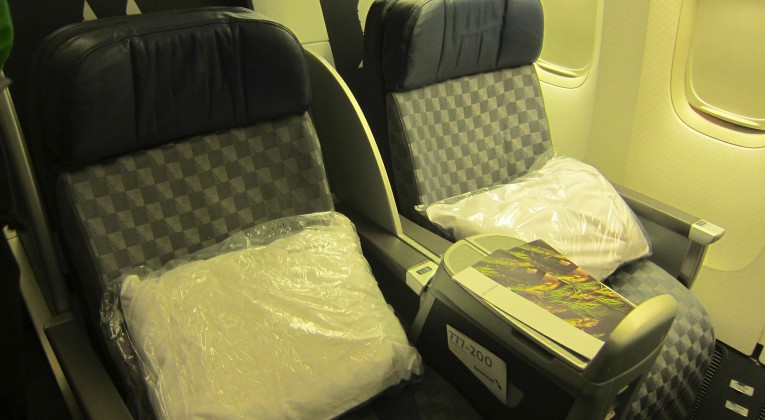 As an Executive Platinum member with American Airlines, I receive eight system-wide upgrade (SWU/eVIP) certificates per year. They come with no minimum fare requirement (United, for example, requires a W fare or higher) and with American often having highly discounted fares to the international cities they serve, they are one of the best features of the AAdvantage program.

Before this trip, I had never been to Santiago, though it was on my list of cities to visit in the next two-three years. When a friend mentioned that the mistake rate they booked at the Grand Hyatt Santiago was going to be honored, it seemed like a perfect time to visit! For a Diplomatic Suite, the cost ended up being $5/night.

American has taken an aggressive stance towards installing lie-flat business class seats on their existing international aircraft, though they recently suspended the 777 reconfiguration product due to delays in receiving their custom-designed seats from Zodiac AeroSpace. As expected, tonight’s flight would feature American’s older cabins, which offer angled lie-flat seats in business class.

Aside from the lack of seats with direct-aisle access, the interior looks well kept and was certainly comfortable enough for the nine hour ride down to Santiago. On this version of 777, there are 16 seats in first, 37 in business and 194 in main cabin. My systemwide upgrades cleared over a month out, allowing me the pick of any seats in the cabin.

During a lull in the boarding process, flight attendants came down the aisles with a beverage tray, Bose noise-cancelling headphones, DC power adapters, and a variety of local and international newspapers.

In the beginning of the year, American introduced a series of amenity kits with the branding from airlines that were merged to form US Airways and American. I was able to collect three of the kits on a February trip to Hong Kong and another four on a trip a few months later to Beijing, leaving my collecting lacking the US Airways and PSA kits. Once settled into my seat, I was pleased to see the US Airways kit had been left.

As I’ve come to expect when flying on a U.S. carrier, the meal selections seemed like the variations of the same dishes they are always serving. I did not have a chance to eat dinner prior to the flight, so I chose the salmon, hoping it wouldn’t be overcooked.

The champagne and wine selection seemed fairly uninspired, though my seatmate did enjoy drinking the Merlot from Mendoza while eating his duck entrée.

American’s beverage list has never gone above and beyond, which I find to be a bit disappointing. Delta offers a variety of mixed drinks, modeled after their elite status tiers, in addition to the drink menu. I’d personally love to see some innovation from American in this area, though I won’t hold my breath.

On the climb out of Dallas, I began to explore the entertainment options available on the in-seat system. Spoiled by a recent flight on Etihad’s 787-9 first class, I was disappointed to see how bad the entertainment selection was on the flight. There were a episodes of major TV shows and then some recent movies, though much of it seemed like stale content. I decided to turn my screen to the moving map, though the system began rebooting itself every 30 minutes. Good thing I loaded up my iPad before departure!

Not long after departure, the service began with American’s signature mixed nuts and a glass of champagne. The flight attendant working my side of the aircraft was in a great mood and seemed as though she genuinely enjoyed her job. Before rolling the cart back to the galley, she offered seconds on beverages and nuts, a rarity on many international flights with American.

Like many airlines, American offers an express meal option, enabling passengers to enjoy more time to work or relax. While this is a great option on short flights, such as JFK to London which often taken less than six hours gate-to-gate, flight time to Santiago was nine hours, so I expected the meal service to be done in courses, as is typical with every other American flight I have flown.

Except it wasn’t. About twenty minutes later, a flight attendant plopped down the tray containing everything bus the dessert. By the time I had eaten the tomato tart appetizer and had some of the salad, the fish was luke-warm.

Despite being luke-warm, the salmon was not overcooked and contained a lot of flavor, something I consider a rarity for an airline meal! Several of the passengers seated around me opted to skip dinner, allowing for the flight attendants to complete service faster than usual. I counted at least two additional drink runs and then another stop to place orders for dessert.

I don’t know about you, but I am tired of ice cream sundaes on international flights, so I opted for the raspberry tart. Though the dessert wasn’t as good as what Michael was offered on his Air France flight, it was more than enough and didn’t leave me nearly as full as an ice cream sundae usually does.

Once the dishes were cleared, flight attendants distributed bottles of water to each passenger and dimmed the lights. With less than six hours until we were scheduled to land in Santiago, I converted my seat into the bed position and managed to sleep for a little over four and a half hours, despite some strong pockets of turbulence throughout the flight.

About ninety minutes before landing, the flight crew came around to take breakfast orders. Though the description of the egg dish sounded good, I opted for the lighter meal, figuring on getting a real breakfast once I was in Santiago.

Considering the fact that this meal had been sitting in a galley cart for more than nine hours, it was surprisingly fresh. Warm bread was delivered a few moments later and though quite simple, it was an acceptable breakfast.

As we descended below the clouds, the mountains surrounding Santiago began to appear.

Just before landing, one of the flight attendants remember our earlier conversation (I spent about 30 minutes in the galley, chatting with the FAs about the state of the airline, among other topics) and brought over an extra PSA amenity kit that she had found. As nerdy as it sounds, this completed my collection of all nine amenity kits.

Moments later, we began our final descent and touched down in Santiago five minutes ahead of schedule.

Arriving behind Delta’s flight from Atlanta and United’s from Houston, it took over thirty minutes to clear passport control. Taxi stands were available in the baggage claim area, allowing me to pre-purchase my ride from the airport to the Grand Hyatt. Though I may have paid a few dollars more than had I paid cash to the driver, it seemed like a better option to avoid getting ripped off.

Customs was an in-n-out affair and within minutes I was in a taxi on the way to the Grand Hyatt.

Limited entertainment selections available, all meals delivered on one tray, no AC power

The flight experience was as I expected it would be like on a U.S. carrier. Food and beverage options are ok, though it seems like they never change. The duck meal has been served on at least three of my international flights over the past year. While I don't mind sleeping on the angled lie-flat seats offered by American, I know many who find them to be uncomfortable, especially for the longer flights such as Chicago to Beijing.

Some good news, at least for a little while, as American will be operating the 787 on the Dallas to Santiago route from mid-December to early-January, offering satellite internet access, lie-flat seats, 110v power outlets and many more upgrades throughout the aircraft. Hopefully by the beginning of next year, we'll have some sort of idea about the future of American's 777-200 business class upgrade program.