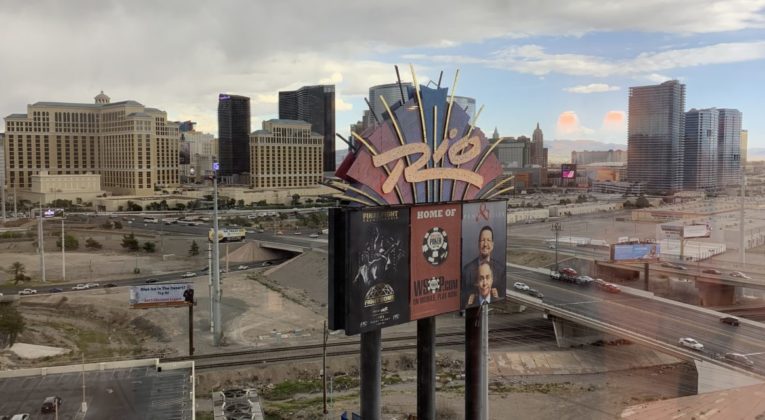 I was planning a trip to Lake Powell and Antelope Canyon. Since I was making the trek from LA, it made sense to stop by Las Vegas too. I have Caesars Diamond Status from my status match from Wyndham Diamond so I was happy to find a comp for the Rio Las Vegas. I also found a $37 all in rate for a renovated room at Harrahs. Decisions, decisions… All resort fees are waived with Caesars Diamond, so a free room really is free!

I ended up choosing the Rio (oops!) because hey, free room! I don’t regret giving it a try, but next time I’ll fork over $37 to try another hotel. The off strip location wasn’t a problem for me as I had a car, but if you’re flying in to Vegas, the location of the Rio might not be too desirable. There’s a separate check in room for Platinum, Diamond and Seven Star members. It was nice and emptier than the main lobby. There’s also a lot of “self-check in” kiosks in the Main lobby without a wait. The front desk attendant Daniel was nice and helpful. He found us two rooms with 2 Queen Beds each that were adjoining. My dad also has Diamond, so we booked two rooms for our group of four. Apparently though, he gave us super outdated rooms…

We had two rooms in the Masquerade Tower, and oh my the online photos on the website looked a lot better. The Rio opened in 1990. Minus the flat screen TV, I honestly don’t think they’ve renovated the rooms since then. All the rooms at the Rio are marketed as “suites” and they are very roomy at 550 square feet. Maybe they forgot about the second R: RENOVATE.

The bathroom area has a large vanity area with a sink, then the bathroom has a sink, toilet and tub/shower combo.

The living room had a very old sofa, and a small desk was provided. A mini fridge was provided in the room as well. The cleanliness was the large issue. The hairdryer was stained, and half the towels were nasty. My bed had a pretty large stain on the top cover.

Also, the towels and bed linens were ridiculously old! They all had fuzz balls and were falling apart. Thank goodness it was only one night!

One funny feature of the room was the see through window from the shower to the bedroom? Odd…

In terms of noise, our floor was a literally a ghost town so it was quiet room to room. Not sure how loud it would be with a full house. But, we could hear the train horn from outside. And we were 14 floors up! All that aside, I surprisingly got decent sleep.

On my long walk from the Masquerade Tower to the Penn and Teller Theater, I passed by a fitness center! It exists! But I didn’t have time to use it.

With Caesars Diamond, we got free show tickets (two per person) at many of the shows at Caesars properties. Our first choice was Wow, the water show/Cirque Du Soleil knockoff, but it was sold out for our dates. We ended up taking Penn and Teller, and got really good seats! It was perfect, as the show is hosted at the Rio. That was definitely the highlight of the stay! The magic tricks were great, although I did feel the beginning of the show was a bit slow, which is kinda annoying when the show is only 90 minutes long. I checked Ticketmaster, and our seats were $85 worth each! I enjoyed the show, but definitely don’t think it’s worth that much. In my opinion, it’s worth closer to $40s. I hear if you want to see it they often have coupons on Groupon and such.

The ridiculously outdated rooms really makes the Rio Las Vegas Comp Room not worth it! There are far too many hotels in Las Vegas to choose from. I probably won’t be staying here in the future.

Have you stayed at the Rio Las Vegas? Comment your thoughts below!

Have any questions? Comment below or email me at [email protected]. You can also view all my other posts here! Thanks for stopping by!