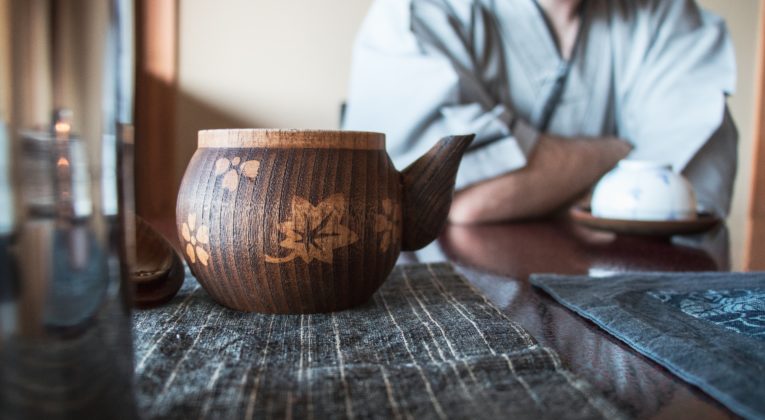 Japan is a country rich with unique experiences for the traveler to explore. One of our favorite experiences was staying in a traditional Japanese ryokan near the Jigokudani snow monkey park. If you’re planning a trip to Japan and wondering if you should stay at a ryokan, here are a few things you should consider!

What is a ryokan?

A ryokan is a traditional Japanese inn. Typical features of a traditional Japanese ryokan include futon beds, low tables, paper walls, sliding doors, straw tatami mats, minimalist decor and communal baths. Ryokan do tend to be more expensive than Western style hotels but you can still find budget-friendly options.  Some ryokan are very authentic and traditional. Others offer modern touches such as TV, wi-fi and even western beds. Ryokan can be found all over Japan but they tend to be more common in onsen towns (towns with natural hot springs).

What to expect when staying in ryokan

Sleeping on a futon on the floor One of the main features of a traditional ryokan is the futon mattress on the floor in place of a bed.  Every morning the staff places the futons back in the closet. They then put out the futons again while you are eating dinner.  We found the futons very comfortable. The biggest adjustment for us was not having a bed to take a nap during the day.

If sleeping on a futon on the floor is an issue, some modern ryokan have Western style rooms with beds. While staying at a ryokan you have the option to borrow a yukata and possibly a jacket if it’s cold. Yukatas are traditional Japanese robes usually made of cotton.  The yukata is meant to be worn at the ryokan in your room, while having dinner or when going to take a bath.  Many guests even wear the yukata outside when walking around onsen towns but it is not common to wear it walking around Tokyo or Kyoto.

There is a specific way to wear the yukata – left side on top over the right side before tying the obi (belt). See this website for detailed instructions.

Breakfast and dinner are usually included in the rate

Ryokan usually include breakfast and dinner in their prices. This is one reason why they typically cost more than Western style hotels. Dinners are usually kaiseki ryori- traditional Japanese multi-course haute cuisine. It’s usually prepared with seasonal, locally sourced ingredients and beautifully presented. Since dinner consists of multiple courses, you can expect it to take you a long time to eat.

You don’t get to choose the dishes or place an order. The menu is planned ahead of time and varies each day. If you don’t like one of the courses, you can probably skip it or only take a few bites. But it is polite to eat most of the food. Since meals take a lot of preparation, if you have dietary restrictions inform the ryokan ahead of time.

Breakfast and dinner are usually served either in your room or in a separate dining room. It’s important to be on time for dinner (the ryokan will either set a time or get your feedback on the time dinner will be served).

Soaking in a onsen Our room had a private onsen

Ryokan are famous for having shared onsen (Japanese hot spring baths). Onsen are typically communal and gender segregated.  It’s typical to switch the genders throughout the day so that both genders can use each onsen.  You are expected to bathe in the nude and are not allowed to wear bathing suits or anything else while in the water. For those that are modest and want more privacy, some luxury ryokan offer private onsen in addition to the shared onsen.

There are certain rules to follow when using an onsen which we’ll get into a little later. Beware: the water is very hot!

Ryokan Have Limited Check In and Check Out Times Ryokan typically have more limited check in and check out times. This can make it hard to get early check in or late checkout like you might in a hotel.

Guests are expected to check in mid afternoon (usually between 3 and 6 pm).  After you check into a ryokan, you will typically be served tea and Japanese sweets. Guests are also expected to check out in the morning (usually by 10 am) so that the rooms can be cleaned and prepared for the new guests.

There is certain etiquette you are expected to follow when staying in a ryokan.  These rules were explained to us by our hostess but in case you forget here are some things to keep in mind.

No shoes inside the ryokan Just like when entering a Japanese home, guests are asked to remove their shoes prior to entering a ryokan and wear slippers.  You will usually see shoes and slippers at the entrance so it will be self explanatory where to leave your shoes. In addition to slippers, you might also be provided with wooden sandals (geta) for walking around outdoors. A big part of the ryokan experience are the communal onsen baths.  When using a Japanese onsen there are certain rules to keep in mind.

Onsen are meant for soaking and not for cleaning yourself.  You are expected to clean yourself in the washing area before entering the onsen and not use soap or shampoo in the onsen. While you will be given a large towel to dry and a small towel, you should make sure towels do not touch the water.  You are not allowed to wear bathing suits, robes, towels or anything else while in the water.

Some public onsen do not allow people with tattoos (tattoos have been historically taboo in Japan as they are associated with criminal gangs). You might be able to get away with covering up your tattoo with a waterproof bandage or hiding it with your small towel before quickly getting in the water. If there is no way to hide your tattoos, some ryokan offer private onsen in addition to shared onsen.

Summary of the ryokan experience

We definitely recommend anyone visiting Japan stay in a traditional Japanese ryokan at least for a night or two. You can enjoy excellent Japanese hospitality as well as exquisite local Japanese food. It’s an incredible cultural experience you won’t regret making time for!