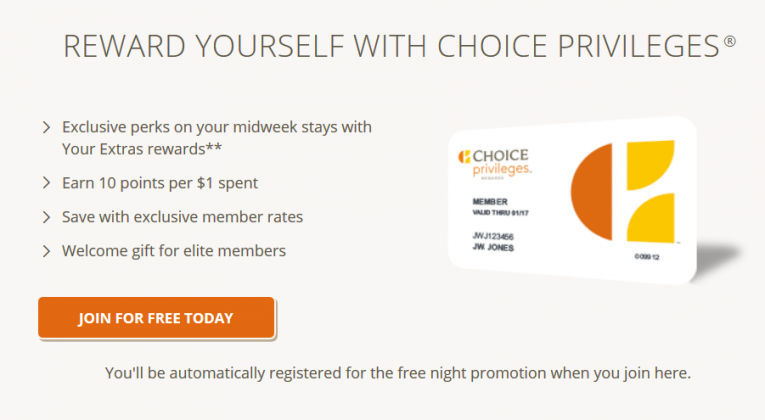 Over the past several years, Choice’s recurring promotional offer has been 8,000 points after two stays.

Sometimes it’s promoted as such: 8,000 points after two stays. More often though, the headline promotes either a free night or a gift card—both of which are available for 8,000 points.

Related: What Matters Most to Travelers on Hotel Review Sites

For its latest promotion, the featured bonus is a free night. But what you’re really earning is 8,000 Choice Privileges points—enough to redeem for a gift card, or for a free night at one of 1,500 lower-priced hotels in the Choice network.

Between April 2 and May 25, Choice Privileges members can earn 8,000 points after two stays. Again, that’s enough points for a free night at more than 1,500 Choice hotels.

Qualifying stays must be booked at ChoiceHotels.com, via the Choice mobile app, or by calling 1-800-4CHOICE, although Diamond and Platinum members may book direct with the hotel, and corporate travelers may book through a travel agent or corporate booking system.

There’s no limit to the number of times the bonus may be earned.

Earning enough points for a free night after two stays, even at a lower-end hotel, is a potentially high-value offer, especially if the qualifying stays are single nights at lower-priced properties.

That makes this one of the more lucrative of the current hotel promotions.

There’s no harm in being repetitious, if what’s being repeated is a good deal.