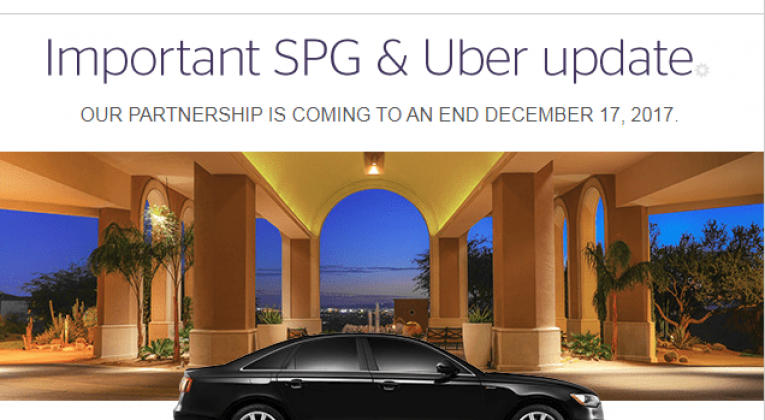 Among Uber’s strategies for world domination of the ride-sharing space has been partnering with travel-loyalty programs, including American AAdvantage, Hilton Honors, IHG Rewards, and Starwood Preferred Guest. It’s a sensible marketing approach: Members of travel-rewards programs are frequently on the road, in need of local transport, and they’re opinion-influencers by virtue of their deep experience.

That makes today’s Starwood announcement on Twitter that much more surprising:

Since 2015, SPG has offered you the opportunity to earn Starpoints for rides you take on Uber. The partnership will not be renewed for 2018 and will officially end on December 17, 2017. You don’t need to take any action. Your SPG account and the Starpoints you’ve earned to date with Uber will not be affected and you can still earn through December 17, 2017.

Neither company is likely to divulge the real reason for the split, or reveal which company precipitated it. But there are a number of possibilities. Among them:

Related: This Country Now Has the World’s Most Powerful Passport

Whatever the reason or reasons, Starwood Preferred Guest members have until December 17 to earn points for their Uber rides.