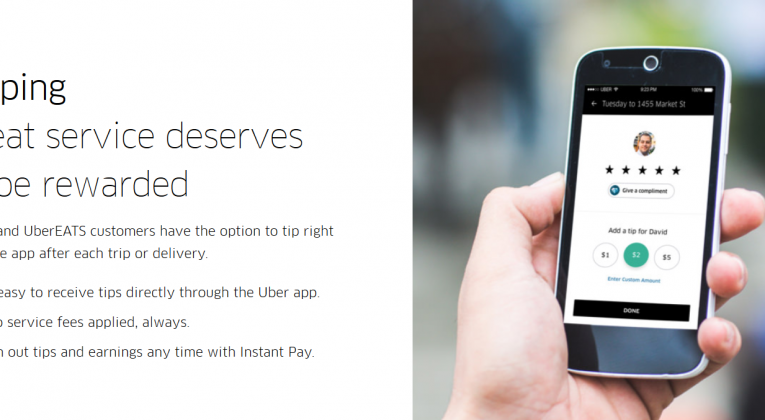 Big changes are coming to Uber.

This morning’s big story: Uber’s embattled CEO Travis Kalanick today resigned from the company he helped found and built into the world’s largest rideshare service. The move follows months of stories depicting Uber as a hotbed of dodgy business practices, harassment, and discrimination. Much of the blame for the misdeeds and corporate chaos fell on Kalanick’s shoulders.

If you’re one of Uber’s millions of customers, the bigger story broke earlier this week, with the announcement that the company was reversing its long-held no-tipping policy.

Part of what has made Uber the undisputed leader in rideshare services is its no-tipping policy. As recently as a year ago, the following promise was featured front and center on the company’s website: “No cash, no tip, no hassle … When you arrive at your destination, just hop out—we’ll automatically charge the credit card on file. And there’s no need to tip.”

Great for riders; less so for drivers.

That verbiage no longer appears on Uber’s website. Instead, there’s a landing page in the drivers’ section titled “Tipping,” subtitled “Great service deserves to be rewarded.” It says, in part:

Tipping is now available in Seattle, Minneapolis, and Houston starting on June 20, 2017. We’re starting with only 3 cities so we can create the best tipping experience for you and your riders. We’ll be adding more cities over the next few weeks and making tips available to all U.S. drivers and delivery partners by the end of July 2017.

So, there you have it: the end of tipless Uber rides. Great for drivers; less so for riders.

The new tipping policy is one of a series of improvements outlined in a memo to drivers designed to appease the company’s increasingly restive workforce. Among the other changes promised over the next 180 days:

But again, for Uber customers, the big story is tipping. And it’s a decided negative, both because it means an effective price hike for riders, and because it perpetuates an inherently unethical compensation scheme.

The very possibility of tipping implies that employees aren’t being adequately compensated for their work by their employers, and it’s up to the customer to make up the difference.

It’s just the sort of nasty business practice that once might have been attributed to the likes of Travis Kalanick. But he’s out, so this one is on Uber.

Will you be tipping your Uber driver?