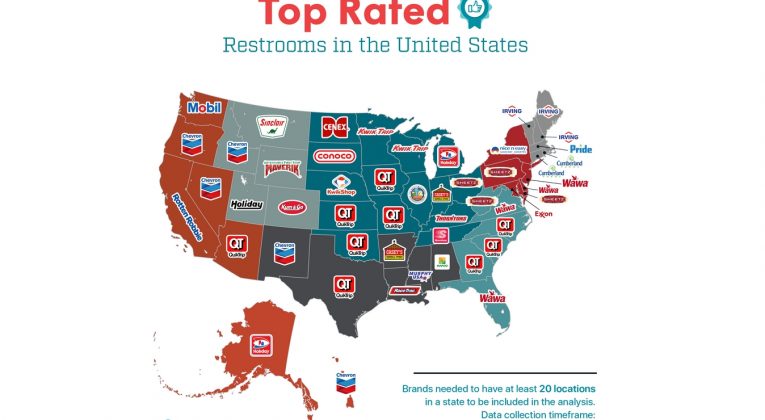 When you’re on the go and have to go, where do you go?

Just in time for summer road trips, the publishers of GasBuddy, a smartphone app providing “crowdsourced information to help drivers find the best gas prices, closest stations, friendliest service, cleanest restrooms, tastiest coffee and much more,” have released the results of a survey of gas station restrooms, based on 1.5 million app users’ reviews.

According to the company, the top-rated restrooms were operated by QuickTrip, which was awarded the highest scores in nine states. Chevron stations came in second, with the best scores in five states in the western half of the country. Tied for third place were Sheetz and Wawa, both of which were rated best in four states.

If there’s a takeaway from the results, it’s that the best-known brands can’t be counted on to provide the nicest restroom facilities. For example, in California, where I live and do most of my driving and pit-stopping, the winner was Rotten Robbie, a 34-store chain in the San Francisco area that I’ve never heard of and that wouldn’t have been my first choice if there was a Mobil or Chevron or 76 station on the opposite corner.

Live and learn. And get the GasBuddy app to check for the best gas prices and the tidiest restrooms.

Do clean restrooms play a part in your choice of gas stations?