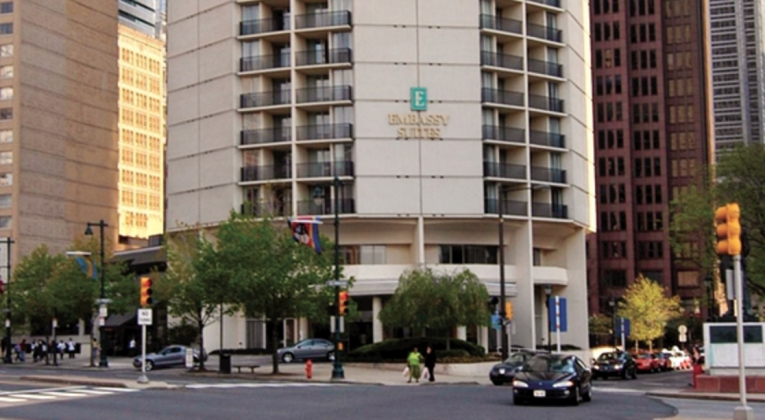 I like Philadelphia. There are a ton of great museums and sites, upscale restaurants and some nice hotels. Heck, there’s even a giant button for kids to climb on:

But next time I come to the city of brotherly love, I’m probably going to be looking for an alternative to the Embassy Suites Philadelphia Center City.

We arrived at the Embassy Suites Philadelphia late on a Friday afternoon. See that cheerless guy at the front desk? There’s a reason that he wasn’t happy. The line was several people deep, and the front desk clerk appeared to be alone up there. Inertia ruled the day, but we eventually made it to the front and checked in. The clerk recognized our status, although he seemed a little confused about the associated benefits.

This was just not a good building to convert to a hotel. Everything felt small and tight. It is a tall, cylindrical space and there were no hallways. It was just straight up. Think “apartment building” instead of hotel. The traditional atrium-style didn’t exist, which makes sense in an urban property. Waits for the elevator were long and it is possible to watch several full ones go by if you are on a lower floor.

The room itself was fine. The living room had a fold-out couch but still gave us plenty of room to make a second bed out of the cushions. Right off the living room was a small kitchen with an adequately sized mini-fridge.

The bedroom was smaller than a typical one for Embassy Suites. Drawer space was minimal and there were few outlets around the room. It was not one of the better beds that I’ve slept on. A Billy Joel line about “a couple of paintings from Sears” ran through my head.

The bathroom was adequately sized, although it suffered from age. The stopper in the bathtub’s drain didn’t fit, so there was no way to take a bath. Amenities were the standard Embassy Suites ones, although the bottles were tiny and not big enough for a family. Water pressure in the shower was good.

The hotel had all of the basics, but nothing more. Again, this is an urban hotel, so hoping for a swimming pool would be fruitless. Size definitely matters in hotels.

Nowhere was the tightness issue more evident than at breakfast. Breakfast was packed every morning, with people pouncing on tables as soon as they opened up (It turned out that there are extra seats downstairs, although it took a couple of days before we found out about them.). Aisles are narrow and lines to get to the food were long. I’m surprised that there weren’t spills all over the place. Trays, plates, silverware and various food items (Seriously, who runs out of oatmeal for the day.) were constantly out of stock.

Service was, overall, adequate. Few employees had the ability to smile, with the exception of those in a position to be tipped. Calls to the front desk were answered promptly and requests were fulfilled quickly, with the exception of the last day, when they missed a wake-up call. A request for a manager got us her voicemail. Checkout is at 11 and they granted us a noon departure without a problem.

$200 per night to house a family of four and feed them breakfast is a good deal. If nothing else, the property was certainly affordable.

It is not coincidence that the password for the internet is “Let us make it right.” But it’s a little sad that they are counting on your having issues. We paid a relatively good price for a city property and the hotel reflected it. The Embassy Suites Philadelphia is not Hilton’s highest quality property and I would definitely consider staying elsewhere next time.

The hotel offers both a great location and good value.

Service was somewhat weak. The hotel itself felt very confining.

You'll get a good deal on a room, but quality suffers for it.