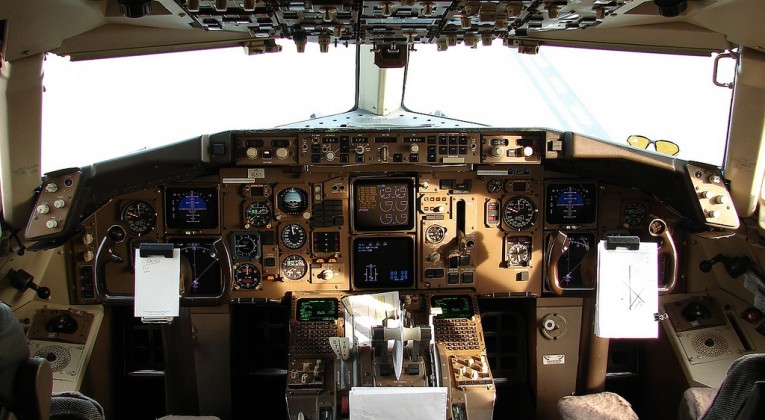 A few hours ago I landed in LHR which has been blanketed in fog along with most of England and Wales. Yesterday, Nov. 2nd 2015, Heathrow cancelled 45 flights which represents ten percent of its departures because visibility was reduced to less than 100 yards. Just last month I spoke at the Chicago Seminar for Flyer Talk and someone had asked me if personal electronics really affect the aircraft. I googled the topic and found plenty of information on studies done by Boeing, Airbus, and the FAA. They came to the conclusion that personal electronic equipment may cause interference to the aircrafts navigation system. None of the studies stated what would happen if an aircraft was off course and this is what I will touch on in this article. To land in Heathrow today the accuracy of the aircrafts navigation system was critical. The B-757 has the capability to land with visibility of 300 feet. When the main struts touch the tarmac I do not see the runway until I lower the nose wheel.

I was introduced to electronic interference way before computers and cell phones. In my youth I was sprawled on the living room floor watching Rin Tin Tin with my eight brothers and sisters. My mother (has traveled to all 50 states) was in the kitchen making her famous Raisin Cookies.

When she turned on the mixer there was an instantaneous white fuzz on the television screen. Of course we all could have yelled mommmm, turn it off, but we loved her cookies so we bit our lips and watched the show through the fuzz. Let’s fast forward from that time 56 years ago to when Lucky was a young lad. I asked him if anything in his house interfered with the television during his youth and he said yes! When he was playing Nintendo Game Boy it interfered with others watching TV all the time!

During my early years of flying, if an aircraft encountered an electrical storm, had a hard landing, electrical equipment installed, or sat for a long period of time a compass swing had to be accomplished at which time we had to take the aircraft to a Compass Rose which is located on the airport.

The area where the compass rose is located is free of steel structures, underground pipes, electrical cables, or equipment that produces a magnetic field. With the engines running and all electrical equipment in the aircraft turned on I would turn the aircraft to different headings as the mechanic adjusted the compass. This was a long a tedious task but when complete you always knew your compass was accurate. At Boeing when electronics are installed on the aircraft they have to be calibrated to the aircrafts navigation system. Whether it be; communication radios, navigation equipment, flight instruments, flight attendants public address system or on board entertainment. Everything has to go through the calibration.

Leaving ORD yesterday the accuracy of the navigational aid (navaid) diminishes with distance. For every 60 miles I fly the distance between each degree of compass heading is one mile. Let’s say I flew a heading of 040 degrees after takeoff and the aircraft behind me flew 041 degrees. At 60 miles from the airport we would be 1 mile laterally from each other. This is why the aircraft is constantly tuning in on other navaids to update its position to remain on track. Also our ATC system has us on radar and politely corrects us when we are off course. Now I am coasting out over the Atlantic Ocean and flying the North Atlantic Tracks (NAT)

which are 60 miles laterally from each other. One reason for such a wide distance is that all the aircraft are controlled by time and speed and if I had an engine failure on the way to LHR I would offset myself from the designated track by 15 miles so I do not collide with the aircraft behind me.

Now I am approaching Heathrow with low visibility weather. As I explained at 60 miles each degree on the compass is 1 mile laterally from each other. Respectively at 30 miles from the airport the distance is ½ mile and at 1 mile from the airport each degree is separated by 88 feet. This is great news because the closer I get to the airport the accuracy increases. With the width of the runway being 200 feet being accurate is a necessity when I cannot see the runway for landing till the nose comes down. Being 4 or 5 degrees off course on landing will seriously decide what type of material will be beneath the aircraft at touchdown.

To be clear, I personally believe electronic signals that have not been calibrated to the aircrafts avionics can cause a problem. Therefore I ask each of you to please let me finish my forty-four year career on a hard service. So when the weather is a concern at your departure or destination have your electronic devices turned off.