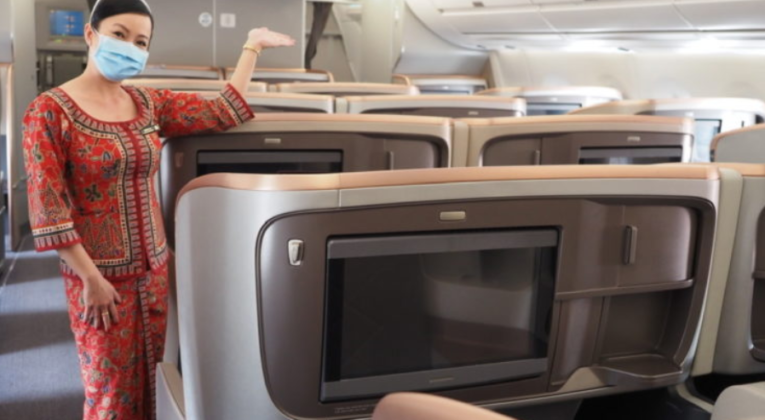 Across Europe, more and more airlines are beginning to start flying with passengers again. Singapore Airlines had their first departure from Copenhagen on Saturday and InsideFlyer Denmark Editor, Henrik Olsen, was there to check it out:

There was already a good atmosphere among the employees at check-in at the airport’s terminal 3. They were delighted that passengers had returned to the airport after a long period of almost standstill.

I met with Allan Hoffery from Singapore Airlines and said hello to the crew as they arrived at the airport.

On Friday there were about 8,000 passengers and on Saturday, 4,000 passengers would be expected to travel to or from Copenhagen Airport. That’s obviously a lot lower than busy pre-covid days that had over 100,000 passengers, but a significant increase from the very worst.

On the way through to the passport check it was clear that there are still not many passengers at the airport – despite it being a Saturday.

Singapore Airlines has introduced a range of special measures, including extra cleaning and everyone wearing a face mask as a minimum. As an extra protection, the crew will also wear goggles.

The crew was in a good mood and clearly happy and proud to have customers on board the plane again. It’s been a long 2- 3 months.

We got a brief tour of the plane before boarding to talk a bit with the crew and about flying with guests again.

Watch a video tour of Singapore Airlines Airbus A350

The aircraft on the route is an Airbus A350 and as a passenger you therefore get a new and attractive product no matter what class you are travelling in.

There was no doubt that the passengers on this first flight would have a pretty good ride.

Is the catering the same as before?

Singapore Airlines has chosen to do a catering setup that is quite close to how it was before the corona crisis.

The only real difference for travellers in Economy is that the selection of beverages is initially limited and that a water bottle is provided from the beginning.

The food is of the same high quality and the main meal on this trip to Singapore was either a chicken fillet with pasta or Asian pork belly with a tamarind sauce, rice and vegetables.

Service has been changed though, with all meals served on trays for all classes. This is to reduce the number of contact points and thus reduce the risk of infection spreading.

Boarding was pretty fast, as there are of course not many people going to Singapore. Singapore does not yet allow transit passengers and thus only allows citizens and people with special visas can access to the country.

So after a quick boarding, it was time for departure and push back. The flight departed roughly according to the timetable.

As an added safety, all passengers were provided with a Personal Care Kit. It consisted of wet wipes with cleansing effect, hand spray and an extra face mask. The extra mask helps ensure that the risk of infection is not increased during the last part of the trip. This is because a face covering loses its effect over time due to moisture.