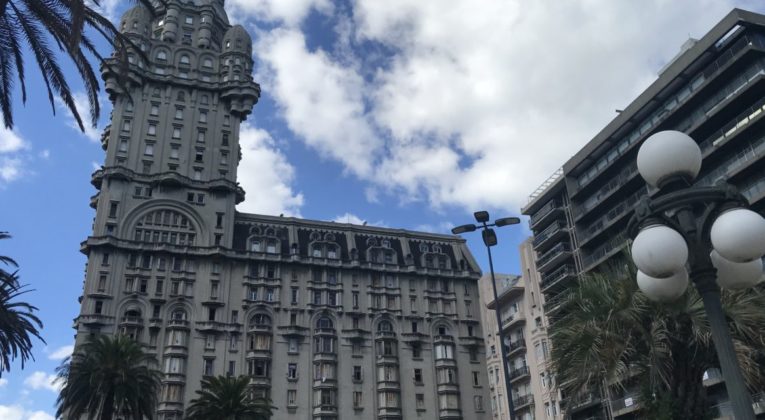 My morning started with a long rain shower in our excellent room at the Hyatt Centric Montevideo. It was glorious. I love rain showers. Even after lingering in bed for a while, I was still up before the sun. My daughter would be asleep for a while longer.

With some time to kill, I took a walk along La Rambla, a path that follows the coast from Pocitos back into the old city. After a while, I looped around towards Covadonga Bakery. The tiny eatery may have been the only place open for breakfast at that time. Starting at 6:00 a.m, you can grab an assortment of pastries for just a few dollars. It’s quick, easy, tasty breakfast. The sun was just hitting the apartments along Pocitos by the time I got back. The not-so-fun part of traveling finally caught up to us in Montevideo. We packed enough clothing for over half the trip, but it was high time to do laundry. We had another day in Montevideo, then two in Miami, and one more driving home in California. So while our time in South America was nearly over, we couldn’t hold out on laundry any more.

Searching on my phone back at the Hyatt, I found a place called Mr. Jeff. The laundry took a day to get done, and cost us $260 pesos (~$8), which isn’t bad at all. I would have happily paid twice that to get it done same day, a service the Hyatt offers.

While walking up and down the Rambla Republica del Peru, I noticed all the buildings, interesting international names. Marrakech. Maracaibo. Saint Tropez. Fontana do Trevi. Saint Laurent. These were just a handful.

Into the Heart of the City

Rather than opt for a cab or Uber, I decided that the public bus would do just fine for getting us to the old section of Montevideo. There are a couple lines that pass along La Rambla that head to Plaza Independencia. The stop is just down the street. A couple more use the next street to the north, which is nearly as convenient. Google fails to provide any info on Montevideo buses, but this site can help you get around.

We used the D1 line, which is pretty direct to Plaza Independencia. The fare is 56 pesos per person, more than the front desk stated. But still not bad, as this is ~$1.70 USD.

Montevideo traffic seems a whole lot more tame than either Buenos Aires or San Jose, Costa Rica. I was surprised how quickly you can move across town. It’s a whole lot more beautiful, too (although I do love the architecture variety of BA). The tree-lined streets of Montevideo are generally clean, and the city as a whole is pleasant. You’ll see a good amount of graffiti, but there are few other negatives to this laid-back South American capital. Our first stop was Plaza Independencia, Montevideo’s main city square. The Palacio Salvo stands tall on one corner. No buildings in Montevideo are especially tall. The World Trade Center towers, visible from our hotel, is actually the tallest in the city at 517 feet. The Radisson hotel and Palacio Salvo are the two tallest in this section of the city. The latter is a beautiful building over 90 years old.

At the other side of the plaza is La Puerta de la Ciudadela, the door of the citadel. This is one of the only remaining sections of wall that surrounded old Montevideo. It stands here as a gate into the pedestrian zone through the Ciudad Vieja. If you need to stay connected to the world, there is WiFi available along the pedestrian zone near the gate. The plan was to walk the pedestrianized shopping zone all the way through to the market near the port, but first we took a detour. In my research on Montevideo, I found a museum dedicated to the disastrous plane crash that stunned the country. Museo Andes 1972 is a tribute to an amazing story of tragedy and miraculous survival that is still burned into the minds and hearts of Uruguayans. Museo Andes 1972 costs $250 pesos or $8 USD per person. They also take Euros and Reales. I paid in a combination of U.S. dollars and local currency. If you’re not familiar with the incident, the introductory video that plays on the basement floor will give you a good understanding of what happened and why this is such an incredible story for Uruguayans. The museum isn’t large, but it has a wealth of information on all aspects of the event. There are panel giving details of each of the 72 long and miserable days the dwindling group remained unrescued. It is cross-referenced with Uruguayan and world events that occurred the same day. Long story short: a number of those who survived the crash survived. The biggest press conference in Uruguayan history was held for the survivors to relay their stories, once they were back in Montevideo. The painting of the shoe is moving. The group found a pair of kids shoes amid the cargo. Each time a party would venture out, they would take one shoe while leaving the other at the plane, with the goal of reuniting the two.

I’d say the museum is worth a solid hour and a half. The event and its impact on the country are an important part of Uruguayan history

By the time we finished at Museo Andes 1972, it was high time for lunch. The spot I’d identified the night before was unfortunately closed, so we just walked along until I spotted a cafe that looked nice. We ended up eating at a place called Sin Pretensiones. Without pretensions. They just let their food do the talking. I went with the Uruguayan Chivito sandwich again. This one was more delicious than the one I’d tried the previous day when we were exploring Colonia del Sacramento. If you’re feeling spendy, steak is excellent. Just make sure to order it medium rare. It is a nice restaurant, but probably the most expensive meal we had the entire trip. I think we still walked out for only $30. One cool thing is that Sin Pretensiones uses overwhelmingly Uruguayan-sourced ingredients. From there we continued down the Sarandí pedestrian zone all the way to the Mercado del Puerto. I was happy with the lunch spot we’d picked, but if you want some choices, there are a number in the market. We did pick up an alfajore to split at one of the shops. I loved the old streets in the Ciudad Vieja. These are the original neighborhoods of Montevideo before the city turned into the capital of the country and the financial and residential neighborhoods sprang up all around. Now about 1.3 million of Uruguay’s 3.4 million residents live in the capital city. Heading Back to Pocitos

We stopped at the Montevideo Metropolitan Cathedral on the way back. This is a much better name than its official mouthful: Catedral Basílica de la Inmaculada Concepción y San Felipe y Santiago de Montevideo. It’s a beautiful church and worth a few minutes to take a peek. From there is was a walk back to the bus station where we caught one of the lines back to Pocitos. The sun was getting low, but my daughter still wanted to enjoy the beach. We also needed a picture with the iconic Montevideo sign, of course. It took nearly 10 minutes to get this shot of just my daughter. There was group after group taking photos, and them some kids just hanging out on the sign. It wasn’t a full day out, but it was still felt like a full day. Our time in the old city, the Andes Museum, and the market were all well spent. No matter what we did the next day, we would be leaving some sights on the table. There is simply no way to see any city this size in just a couple days.

What I appreciated most about our first day in Montevideo is how easygoing the capital is. Sure, it is a city, but the traffic is mellow and the streets are beautiful. No one is in a particular hurry.  If you’re looking for underrated, easygoing destinations, consider Uruguay.