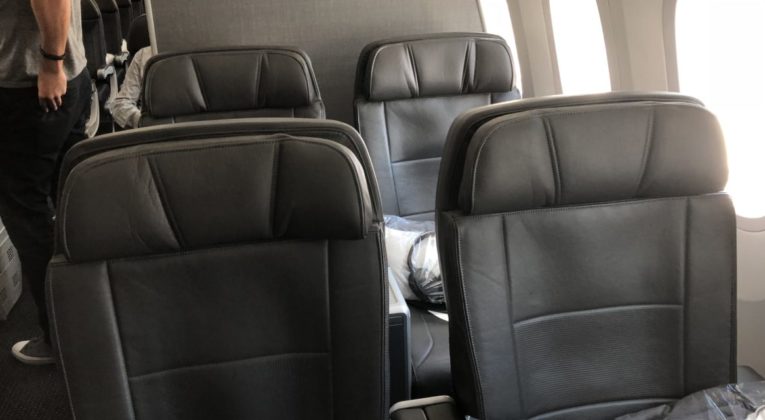 Affiliate Disclosure: In the interest of full disclosure, The Unaccompanied Flyer/Max Prosperi earns monetary compensation on selected links. When you click on an affiliate link, I may receive compensation for your purchase(s) through said link. These affiliate links are noted at the beginning of each post. Thank you for your continued support.

It’s been a while since I reviewed American Airlines’s Premium Economy product aboard the Boeing 787-9. Okay, I admit it, it’s been well over a year since I published my review of what was then, a new product for American Airlines. However, as the first major US-based airline to debut a premium economy product, many travelers remain hesitant to shell out hundreds of dollars for the upgrade from standard economy to premium economy.

Even with most reviews out there indicating that American Airlines Premium Economy is of great value, I completely understand why a traveler would still be hesitant to book or upgrade to premium economy. The fact of the matter is that, for many US-based travelers, premium economy is a new concept. So, after months of questions from TravelUpdate readers, I’ve decided to answer some of the top questions about American Airlines Premium Economy.

How can American Airlines Premium Economy be booked? Can I use miles or is it cash only? As for the new Premium Economy mileage awards, when American Airlines launches its seasonal flights to Anchorage (ANC) from Dallas-Fort Worth (DFW) using the airline’s Boeing 787, awards will start at just 25,000 AAdvantage miles one-way plus any taxes and fees. Right now, in February, the least expensive one-way Premium Economy awards start at 40,000 AAdvantage miles.

Can I upgrade to American Airlines Premium Economy with miles or upgrades? Are cash upgrades available?

Cash upgrades are first offered during booking. I would recommend passing on upgrading from economy to Premium Economy booking unless the fare difference is quite small. The next opportunity to purchase an upgrade to Premium Economy will come at check-in. The price to purchase an upgrade at check-in will vary a great deal as the upgrade price is based on space available, demand, the current price of a ticket in Premium Economy, and of course, the length of the flight. Your last chance for an upgrade is at the airport. Upgrading on the day of departure at the ticketing kiosks or counters will likely be the best time to do so. However, this won’t always be the case. In some cases, you may be able to purchase an upgrade at the gate prior to boarding on a first-come-first-serve basis.

Are spirits, wine, and beer complimentary in Premium Economy?

Yes. This is the case in Premium Economy and also in economy. Premium Economy is only offered on international flights, flights to Hawaii, and eventually flights from Dallas to Alaska. Economy passengers on longer international flights and flights from Dallas to Hawaii already received complimentary wine and beer. Additionally, economy passengers on some of American’s longest flights including flights to New Zealand and Australia receive free spirits. That said, yes, regardless of the route, if you’re flying in Premium Economy you will receive complimentary beer, wine, and spirits.

Is the meal service in American Airlines Premium Economy better than what I would get in standard economy?

Yes. It’s not a huge upgrade compared to food served in economy. But it’s still significant. The type of meal and portion sizes will vary depending on the duration of the flight and even the destination. In some cases, some Premium Economy entrees might closely resemble one of the options offered in Business Class. But overall, yes, you will receive enhanced meal service served on actual china and not in tins or plastic containers. However, that beverages still come served in plastic cups.

Do Premium Economy passengers receive their own lavatory like in Business Class?

This, at least for me, is a resounding yes. Those seated in bulkheads seats will benefit from an actual legrest compared to the footrest offered at other seats. Additionally, the seats feel more open and less restrictive. If seated in a middle or window seat, it’s easier to access the aisle compared to seats in other rows. 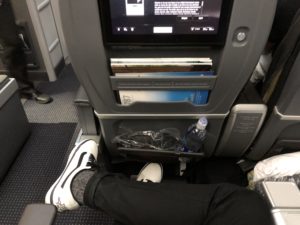 While the armest is immovable at the bulkhead, this is the case at every Premium Economy seat. Regardless of where you sit, there will be an immovable console on either side of you. My advice is to book a seat at the bulkhead.

If the person in front of you was to recline, what’s the legroom like? Can you still use a laptop or does the seat impede on the ability to move around and use larger devices?

The recline is only a few inches greater than what’s offered in American’s extra legroom product in standard economy, Main Cabin Extra. When the passenger in front of you fully reclines their seat, it will not protrude into your personal space and won’t inhibit the passengers seated in the middle or at the windows from getting to the aisle. You will have no problem using larger electronic devices.

What are the best seats in American Airlines Premium Economy?

If you are unable to snag a seat at the bulkhead, my advice is to avoid middle seats and seats located in the final row of Premium Economy. Other than that, it’s up to you. Do you want the window or the aisle? That’s the only question to ask when booking Premium Economy— assuming the only seats left aren’t middle seats.

Below is a seat map of the American Airlines Boeing 787-9 Premium Economy cabin featuring my recommendations for selecting a seat on the aircraft. (A seat with a star are seats that I personally tested on past flights.)

*(select aircraft have not yet received Premium Economy)

Should I book or upgrade to American Airlines Premium Economy? Is it worth it?

The answer to this question will depend entirely on you as an independent traveler. Personally, if I’m trying to avoid economy or travel in luxury, I will save my miles and/or my money until I can fly in Business Class. I don’t typically upgrade from economy to Premium Economy unless it’s an amazing value which is quite rare. There are plenty of seats in American’s economy class cabins which offer far more legroom than what’s offered in Premium Economy. And if you’re like me, unless I’m traveling in Business or First Class, I prefer my own food on long flights.

Still, personally, I’d rather save the few hundred bucks upgrade to Business Class on another trip. I might also consider putting that money into a spending bonus like the one currently offered by American Express. You earn 60,000 Membership Rewards points after meeting spending requirements with The Platinum Card®.