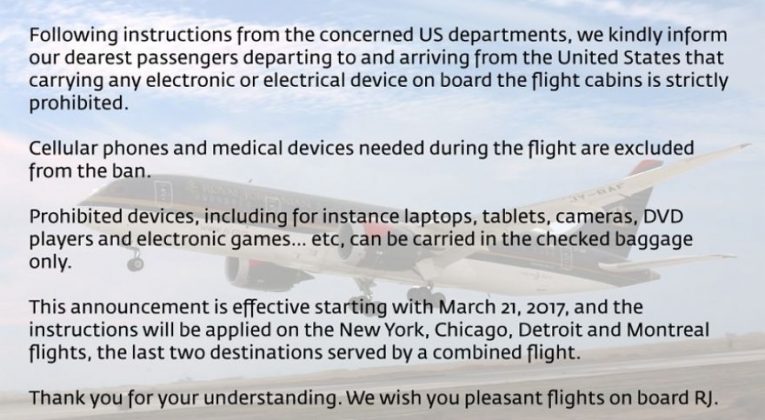 It’s official: Passengers flying on nine airlines non-stop to the U.S. from 10 airports (Cairo, Egypt; Amman, Jordan; Kuwait City, Kuwait; Casablanca, Morocco; Doha, Qatar; Riyadh and Jeddah in Saudi Arabia; Istanbul in Turkey; and Abu Dhabi and Dubai in the United Arab Emirates) will be prohibited from bringing electronic devices larger than cellphones on board with them.

Laptops, tablets, cameras, and the like may only be transported in checked bags. Cellphones and medical devices are exempt from the ban.

Affected airlines have until Saturday morning to comply. The ban will remain in effect until further notice. “However, DHS and TSA continue to evaluate our aviation security processes and policies based on the most recent intelligence.”

Related: Who Has the Newest Planes? (And Does Anyone Care?)

As for the nature of the security threat underlying the ban, the DHS was predictably vague in a Q&A posted to its website: “We have reason to be concerned about attempts by terrorist groups to circumvent aviation security and terrorist groups continue to target aviation interests. Implementing additional security measures enhances our ability to mitigate further attempts against the overseas aviation industry.”

Reading between the lines, and factoring in what we know, U.S. security agencies have detected an elevated volume of terrorist chatter, and identified airports with relatively lax security-screening standards as likely strike points.

News of the ban was disclosed early Monday in a tweet by Royal Jordanian Airlines, advising passengers of the upcoming policy change. Later that day, the tweet was deleted from the airline’s Twitter feed, but not before the story had roiled the travel blogosphere and fueled front-page coverage by many mainstream news outlets.

The rule is more than just an inconvenience for travelers, who won’t have access to their electronics before or during their flights. Checking them exposes expensive electronic devices to theft and damage. Most travelers will probably be fine with the trade-off of inconvenience for security. But some will wonder whether there’s enough of a clear and present danger to warrant such measures, especially given the rather generous four days the government has given the airlines to comply.

Necessary and appropriate, or government grandstanding?