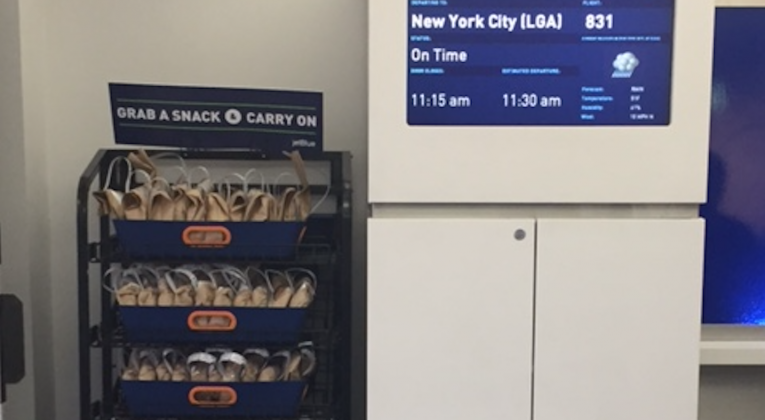 This morning, I hopped on the JetBlue version of the new Boston-New York shuttle. This may be the shortest flight review in history, since most of the action took place at the airport, particularly on the Boston side. Welcome to the new shuttle, but the JetBlue version.

Few routes have suffered as much from airline service cuts as the shuttle, particularly the Boston-New York route. In the “good ol’ days,” the shuttles were the pride and joy of airlines. Above average service to business customers, who could simply walk up and board the next plane. Fill up one? They’ll roll out another. The shuttle was so prestigious, in fact, that some saw it as a stepping stone to the presidency. As airlines and their customers cut back, though, the carriers reduced amenities. Sure, you may get a bagel onboard now, but you could also find yourself on a claustrophobic regional jet.

The JetBlue shuttle (my term, not theirs), is the shuttle bus for the rest of us. They may not have the same amenities, but they are at least offering a few tokens to say, hey business travelers, we appreciate you:

Granted, almost every JetBlue flight offers the free Fly-Fi, but craft beer in the morning? Where else can you get that? And for those of you who wonder what a simit is:

Once onboard, other than the free alcohol, you won’t notice any differences. But for a 45-minute flight, what do you need?

Now, here’s the best part: JetBlue has introductory fares as low as $34 one-way. And because JetBlue is doing it, all the cool kids have to, as well. In fact, American has fares as low as $61 round-trip. The days of the mileage run may be done, but if you need a few segments or elite qualifying miles, this is your run.

There’s only one negative to the trip, and that’s on the New York end. The flight arrives in (or departs from, depending on where you are going) the A Concourse of the B Terminal at La Guardia. You could be forgiven for not even knowing that there was such a concourse, given how desolate it is. When Au Bon Pain qualifies as fine dining, you know you need a gut renovation.

But if the terminal is the worst thing you can say about a flight, you’re not doing too badly. Enjoy your cheap trip to New York on the new JetBlue Shuttle.