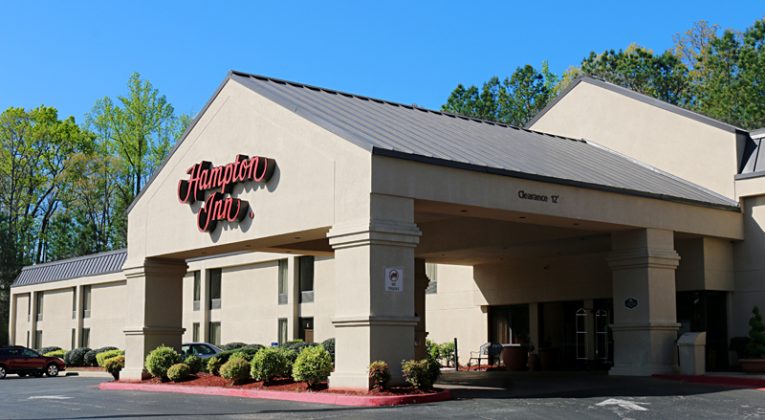 For today, Monday, July 4, 2016, I thought I would post a review of a stay I recently experienced in the United States.

Whenever I stay at a hotel branded as a Hampton Inn, the stay is usually nondescript: a comfortable bed; some furnishings; a few amenities; and an edible breakfast which does the trick but is not something to which I look forward…

…so when I checked in at the Hampton Inn Chester — which is located in Chester, Virginia approximately 12 miles south of the city of Richmond — I expected yet another typical stay at a Hampton Inn for a reasonable room rate.

There was one difference, though — to which I will get later in this article.

I walked into my room on the second floor of the hotel property; and sure enough, it was basically the typical room one would expect at a Hampton Inn — which is not a bad thing at all.

Although it was not spacious, the room was generally clean; and it did include a flat-screen television and a place to put luggage which can double as a place to sit. The center door is the entrance to the room; while the door on the left with the full-length mirror leads to the bathroom.

The room was equipped with a desk, a rolling office chair, a stationary chair, and plenty of lighting. There was a narrow window — typical of a room at a Hampton Inn for some reason — with a climate control unit. On the desk were the supplies needed to brew and enjoy a cup of coffee or tea. As I drink neither, I did not use any of the items.

A microwave oven and a refrigerator are always useful in a hotel room. I placed some water in the refrigerator; as well as a couple of cookies — one chocolate chip and one oatmeal raisin — which were on display at the front desk for guests to take.

The bed was comfortable. I had no complaints, as I slept well.

The bathroom was rather small and cramped; but it was also sufficient for its purposes and was supplied with an ample amount of towels.

The curved bar holding the shower curtain helped to provide more room when taking a shower.

The amenities awaiting in the bathroom included soap, shampoo, conditioner and body lotion by Neutrogena; as well as a cloth to polish shoes.

A hair dryer was plugged in and ready to go in the bathroom; and a look inside the armoire which served as a closet revealed items such as an iron, a plastic laundry bag, a luggage rack, an ironing board, and an extra blanket in a plastic bag on the shelf.

I have no idea what exactly was that red spot I found in one of the towels — nor that brownish-green streak found on a different towel. This would have to be my most significant complaint in what was otherwise a pleasant stay at the Hampton Inn Chester. That there was an ample amount of towels was definitely a good thing in this case.

I do not believe anyone travels to Chester to stay at a hotel property in the hopes of having an incredibly spectacular view; and while the view from the window of the room was not the greatest I had ever seen, it was not the worst, either. The view comprised mostly of the parking lot — although there were also some woods at which to look as well, which helped improve the view somewhat.

There was plenty of parking in the parking lot. A parking space near the entrance of the hotel is a nice perk when you have earned Diamond Hilton HHonors VIP status. However — as demonstrated in a few of the photographs in this article — the parking lot had ample space available anyway.

When I woke up the next morning, I went downstairs to the dining area near the lobby of the hotel, expecting the typical aforementioned Hampton Inn breakfast offerings. What I found were options of which many seemed to be upgraded from that usual breakfast.

One section of the breakfast buffet — from right to left — included assorted varieties of bagels, bread and muffins. There was a microwave oven; and behind that is a waffle iron where you can cook your own waffle in two minutes using a predetermined amount of batter. There was a station with whipped cream, chocolate syrup, mango syrup which was artificially flavored, and other accompaniments and condiments for waffles. Oatmeal was available in the big heated vat. Raisins and dried cranberries with jellies were next; and then there were the hot foods which included crispy bacon.

The other section of the breakfast buffet is where three kinds of dry cereal, assorted sealed cups of yogurt, fresh whole apples and bananas, mixed fruit and juices are located.

Here was the first round of breakfast for me: mixed fruit, which included orange and pink grapefruit sections, fresh raspberries, fresh blackberries and fresh blueberries; a fresh waffle with real whipped cream and both chocolate and mango syrups; a poppy seed bagel; crispy bacon; potatoes; dried cranberries; and a cup of orange juice.

The bagel was not near the quality of one found in New York — that would be an unrealistic expectation — and the orange juice was not freshly squeezed but rather passable at best. The bacon was not fatty but rather lean, as it was tasty and had the right amount of crispiness. The real whipped cream and chocolate syrup complimented the flavor of the fresh hot waffle, on which I would normally also put fresh strawberries if they were available. The fresh assortment of berries were surprisingly free of defects and full of flavor — which is usually not expected at a breakfast offering at a Hampton Inn. The orange and grapefruit sections were not fresh but were still quite delicious.

I went for a second helping — as well as for a third helping. Despite my minor criticisms, breakfast was that good; and it was satisfying. That there were not too many other people eating breakfast at the same time as me ensured that the experience was that much more pleasant.

Members of the staff were friendly and helpful, as they responded favorably to any requests — such as one which I had for shaving cream when my supply was depleted. Other than the aforementioned stains on the towels, I had no issues with my stay.

Stains found on towels
Bathroom is not spacious

At $80.67 total — which includes $9.47 in taxes and fees — my stay at the Hampton Inn Chester was a good deal. I would recommend staying at this hotel property if you find yourself in the Richmond area and want a clean and comfortable place to stay with few frills and is conveniently located near Interstate 95 — and has a good breakfast.