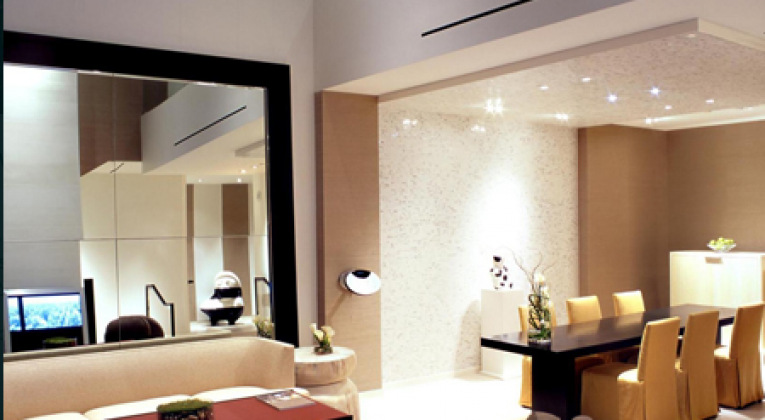 Built on the top floors of the MGM Grand, the SkyLOFTS is among the most luxurious of boutique hotels in Las Vegas. It consists of 51 suites, with the “smallest,” the 1-BR, starting at 1,400 square feet. Traveling with a few others? Move on up to the 2-BR (with or without plunge pool) or 6,000 square foot 3-BR. This kind of luxury will cost you a pretty penny, with the 1-BR starting at $900 per night and the 2-BR starting at $1,600. You don’t even want to ask about the 3-BR if you aren’t comped (They told me that, on average, comped guests account for a little more than half of their business. If you want a comped 1-BR mid-week, plan on being worth $50,000-$100,000 to the casino.).

Before reading this trip review, you need to know something about me: I’m not a luxury traveler. Sheratons and Westins work very nicely for me, thank you very much. When I dine with my Las Vegas partner-in-crime, Michael Trager, he usually chooses the restaurants. After the food arrives, he’ll whip out his phone to take photos of the amuse-bouches while I look at the spoons and think, “Ooh, samples, just like at Costco!” Having said that, I was blown away the first time that I toured the property and a few nights there are my one luxury splurge every few years (A good Virtuoso agent can get you some freebies thrown in.).

Your visit starts as soon as you arrive. The hotel sends a Rolls-Royce to pick you up at the airport (or the Residence Inn, if you arrived the night before and wanted a cheap place to crash) and transport you back to MGM. When we arrived, there were several people lined up as a welcoming committee. It was actually a bit awkward for those of us not used to anything more generous than the choice of one or two keys, but who was I to refuse their hospitality? I felt regal. You’ll pass through the VIP lounge and several desks on the way to the elevator.

You and a small army (including a check-in employee, bellman and butler) will head up to your loft to check you in. I still have yet to figure out the recipe for the welcome juice they serve you (All I know is that it contains orange, cantaloupe and vanilla extract.), but it might be the best drink that I have ever tasted. The mini-bar will be stocked for you (based on previous likes and dislikes, if you’ve stayed there before) and then they’ll show you around the loft. Pay careful attention to how to use the coffee maker and the iPad-like device that serves as a remote control for everything in the room, from the shades to the TV.

The room itself is what I would call “modern luxury,” something that you’d expect to find in a high-end building in a large city, rather than the Presidential Suite on a cruise. The downstairs has a kitchen, living room and office area, while the upstairs contains your bedroom, a closet that runs the length of the bedroom and one of the largest bathrooms that I’ve ever been in. Bathroom amenities are all Bulgari (I got the red.) and the room is serviced twice per day.

Helpful Hint: When you are “stealing” the amenities, don’t forget the bathroom downstairs, which they also stock. A few nights here and you’ll have soap/shampoo for a month.

The iPad device that controls everything is a step up from the previous one. It will be your remote for the TV (Pay-per-view movies are free.), control the heat, lights and probably several other amenities that I never knew existed.

There are a couple of things that I disliked about the room. The infrastructure is a bit older, and some of the services could use a refresh. In particular, the HVAC had a tough time keeping the room cool enough and the internet was bad enough to make a Holiday Inn blush. The televisions are on the older side. Of course, MGM doesn’t want you holed up in your room, so they probably see it these “faults” as an advantage.

Helpful Hint: If you are watching movies, know that the system keeps track of your most recent selections. The guest before me had some, um, interesting predilections.

I could probably write an entire review on the bathroom itself (but I won’t). No bathroom actually needs to be this large, but there’s no question about the amenities, with an infinity tub and immersion shower to accompany the aforementioned soap and shampoo. The sink has a television in the mirror, while the tub has a larger TV in the wall. The immersion shower (which, mysteriously, does not have a television) comes with about a half dozen showerheads sprinkled throughout, in addition to the waterfall unit over your head. Adjust it to suit your level of water conservation.

Needless to say, the service at the SkyLOFTS is generally outstanding. Your butler can get you anything you need, including show tickets, restaurant reservations or the orange shag throw blankets from the bedroom, in case your wife falls in love with it (added charge, of course). There was always somebody available to help, whether it was the employees on the casino level or the concierges located on the actual SkyLOFTS floors. Their powers were not limited simply to the MGM Grand. They could help you out at any of their properties in Las Vegas (and could easily hook you up with reservations or tickets at another company’s property, if you so desired). There was nothing that they couldn’t do. Well, almost nothing…

But my favorite perk is one of the “hidden” ones: You can take meals at The Mansion, the hidden “hotel within the hotel” behind iron gates. Normally, a property like The Mansion would have a restraining order against people like me, but we ended up using our breakfast credit there every day. Virtually all the villas at The Mansion are given out to comped guests and, if you are able to find a high-end travel agency that can get you in, you can expect your bill to start at $5,000 per night. I have yet to meet anyone who has actually paid out of pocket. If you want one comped, be prepared to play several hours per day at with wagers in the five to six-figures range. Per bet.

As for that “almost nothing” above?” I had one issue, and I’m guessing it’s a problem that they don’t face very often: They couldn’t figure out how to credit points to my account. Like other MGM guests, SkyLOFTS guests are supposed to get both tier points toward their M life accounts and Hyatt points, based on what they spend. But nobody could figure out how to do it. They’ve probably had as many people ask for points as they have had ask to be picked up at the Residence Inn. It took several phone calls and the intervention of my travel agent, but they finally got the points right. I think.

Sadly, every vacation has to come to an end. After a few nights in our suite, we weren’t quite ready to leave, but my credit card told me that it was time to go. So we called our butler, bid the SkyLOFTS staff goodbye and caught our limo back to the airport. At least it wasn’t back to the Residence Inn.

Name it. You'll have one of the most remarkable rooms (not to mention bathrooms) that I've ever stayed in, not to mention access to just about anything in Las Vegas that your heart desires.

I had a few minor nitpicks with the room's infrastructure. The property is getting a bit old and could use a refresh.

Starting at $900 per night, the SkyLOFTS isn't cheap, but it is easily one of the most decadent experiences in Las Vegas. If you have one big trip where you are willing to blow your travel budget on the hotel (Hey, let the miles pay for the airfare.), the SkyLOFTS would be an excellent choice.