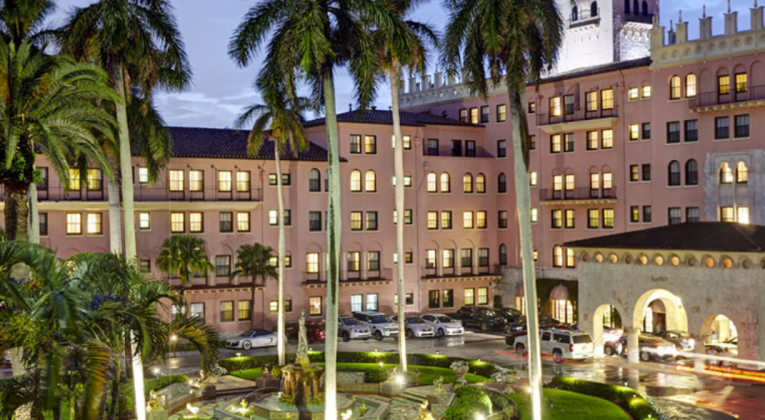 There are several code words that I look for when researching a hotel. “Cozy” means that the rooms are going to be small. “Classic” means that nothing in the room is going to work. But the worst of all is “iconic,” which is a combination of both of the above. It is no surprise to me which of those words the Boca Raton Resort & Club uses to describe itself.

One of the unhappy trends over the past several years has been for companies to take the older hotels in their systems and recategorize them as part of the luxury brand, such as St. Regis or Waldorf, with the definition of luxury having become “I use your name every 30 seconds when I talk to you.” And while Starwood has certainly been one of the guilty parties, the king of violations is Hilton.

Such is the case with the Boca Raton Resort & Club, part of the Waldorf Astoria collection, where I just completed a four-night stay.

The Boca Raton Resort & Club is located on E Camino Real in Boca Raton. It’s about a thirty-minute drive from the airports in either Fort Lauderdale or Palm Beach, but it’s also about an hour from Miami International. A cab from either of the first two airports costs about $75, while Miami is estimated to be about $140. Interestingly, Uber told me that a trip to MIA would only cost me about $50.

There are numerous restaurants and activities within a few miles of the hotel, but you’re going to need a car to get there and, as we’ll discuss later, parking isn’t cheap.

The entire resort is divided into the main building (and adjacent towers) as well as the Beach Club, a shuttle ride away.

Rocky. My cab pulled up in front of the hotel at about 3pm and a bellman came and lugged my suitcase out of the trunk. He left it next to the wall at the front desk while I waited in line to be checked in. The wait was only a few minutes.

The woman who checked me in seemed nice but not particularly experienced at what she was doing. I watched several people walk up, get their keys and walk away while I waited. She told me that every time she found a room, somebody else grabbed it. I’m not sure what that meant, but I may have misunderstood her, since she was chewing gum while checking me in. Nobody offered to help me bring my bag up to my room, although it was busy when I arrived. Bellmen tips are included in the resort fee.

The physical plant itself is nice but old. The hallways had the musty smell of an iconic hotel and, while I didn’t exactly expect to see twin girls on tricycles coming down the hall, it definitely felt like “old-style” luxury: Long hallways, slow elevators and a few levels of steps.

Checkout was delayed because they had charged me for the premium internet. I told the clerk about the problems I had with the internet and he asked me if I had called down to alert them. By this point, I was mystified that there was somebody at the property who didn’t know about the issues, but he removed the charges after I told him that I had spoken to the manager.

There are several buildings in the hotel, ranging from the Cloisters, where I stayed, to the Bungalows and Yacht Club, reachable by shuttle. For a luxury property, the room was very disappointing. Even though they had been renovated the previous year, the rooms still had all the charm of a suburban Sheraton. Bathrooms are small and reasonably well appointed, while the room itself had only a little space to move around. Lighting was poor and that desk you see in the photo above is as small as it looks. The hotel bragged about having put in an average of $100,000 per room in renovations, but I had a hard time seeing where it all went.

One exception: The bed was extremely comfortable and the sheets/comforter were luxurious. I would happily have taken them  home with me.

I stay at this hotel annually for my conference and, from past experience, I know that the internet is going to be slow, so when I arrived, I was pleased to find out that they had changed out the internet system. And, indeed, they had: This time, I couldn’t connect at all.

He couldn’t figure out the problem, either, so they determined that it was the room that was the problem. They moved me down the hall to a larger room and I tried again. Nada. Eventually, the manager found out that there was a hotel-wide problem and that it was actually on AT&T’s end. She offered to give me a food and beverage credit for the inconvenience. I declined, but am still frustrated that the service at the front desk had been poor and that nobody triangulated what appeared to be a known issue. My internet in my room did not get above 2 Mbps for the stay. On the plus side, I got a nicer room.

My second room was a Deluxe Cloisters room and it was bigger, with better lighting. There were outlets everywhere, so finding a place to plug in wasn’t a problem. The TV was a large flat screen, opposite the beds.

A renovation hadn’t solved all the issues, though. There was no dresser and, in fact, in the closet, there weren’t even any shelves. I finally found a few shelves beneath the television but, if I had been traveling with anybody else, somebody would have been living out of a suitcase. The air conditioning worked well, but they clearly hadn’t replaced the old system, since it knocked throughout the night.

This was the strongest area of the hotel. They had a spa, golf courses, pools, etc. It is a traditional resort and club and someone coming to play 18 holes and relax by the pool would feel very at home here. There are ten restaurants on-site (including those at the Beach Club), ranging from casual to fine dining.

Guests can book a tee time at one of the courses, although the resort also hosts a private club, meaning that there can be competition for the greens.

The hotel is family-friendly, with games, activities and a club for the kids, as well as a nearby beach. Had I brought my family, they easily could have spent several days here. Since there is not much within walking distance of the property, if you want to go into Boca Raton, you will probably need a car.

I did not hit the pools or golf courses myself, but reviews from others who did were very favorable.

Virtually every service problem that I had came at the front desk. Employees simply did not seem engaged. I was surprised to find this attitude at the desk, since that was the first point of contact for most guests.

The rest of the hotel staff was quite friendly. Employees said hello in the halls and requests were fulfilled quickly and accurately. The people assigned to our conference really hustled. I ordered room service one night and it showed up in a half hour.

I’m not sure how one defines value, but this hotel wasn’t it. The website advertises the lowest room rate as $249 and, if that had been the end of it, the value wouldn’t have been terrible. But let’s look at some of the other fees that come with the resort:

The hotel was booked solid, so I didn’t receive the benefit of an upgrade, but I did get a few other Diamond benefits. They gave me coupons for bottles of water from the minibar, as well as drinks at any restaurant. As an amenity, I could choose two of 1,000 points, a free movie or a 20% discount at the spa. Needless to say, the complimentary premium internet access was a moot point.

There are activities to suit every taste and age group. You won't be bored here.

Service, particularly at the front desk, was spotty. Rooms in the Cloisters are small and in-room amenities are lacking.

Just because a property is within the Waldorf group doesn't make it luxurious.