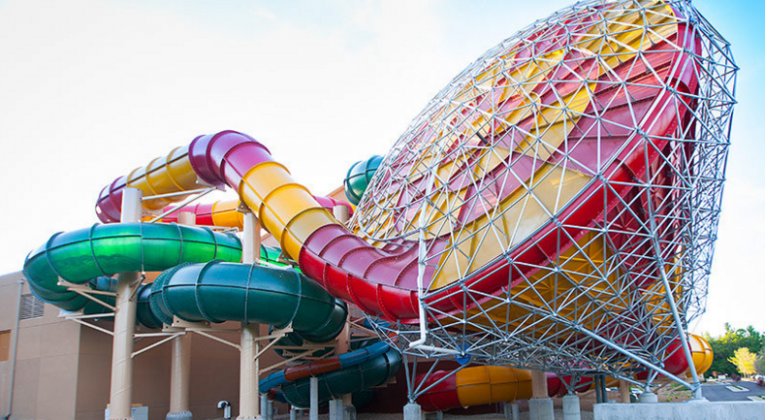 Great Wolf Resorts is a chain of 14 water park resorts, a combination of hotel, water park and other activities. It’s geared toward families, so if little people aren’t your thing, this is probably not the place for you.

Great Wolf Lodge New England is in Fitchburg, MA, approximately an hour northwest of Boston. Aimed mainly at families, the resort is best known for the 68,000 square foot indoor water park that is free for all guests. In fact, there’s no way to buy a separate ticket to the park. You need to be a registered guest staying for the night.

Check-in was easy, although it took several minutes to check in each guest. Kids are treated like VIPs and given a pair of wolf ears. Those celebrating a birthday (or claiming to be celebrating a birthday) are given a special bracelet that gets them free ice cream every day of the their stay. Check-out was even easier. We just left and they emailed us the bill.

We ended up getting the Wolf Den Suite, a room with a built in “log cabin” for the kids. It’s spacious enough for a family of four, although our bed was a double, rather than a king or queen. It’s not so spacious when the kids decide to get into bed with you in the morning. Note that there is also no door on the cabin, so don’t plan on watching TV while your kids sleep. Of course, the kids have their own television, so it might not be you keeping them awake. There is a small sitting area next to the bed as well as nightstands on either side. It was certainly comfortable, but not luxurious. And there’s a reason that you won’t find a single photo of a bathroom anywhere on their website.

On the plus side, they did put some thoughts into the grown-ups when building these rooms. There were outlets throughout the room and, at over 75 Mbps, the wireless speed was among the fastest of any hotel that I’ve stayed in anywhere in the United States. Overall, the hotel did a decent job of combining comfort and practicality but, under no circumstances should you expect luxury. Oh, and don’t forget that there are a lot of kids here. Expect noise.

There are arcade games, a small fitness center, storytime for the kids, a magic show and a dance party at 8pm each night. But people come here for the water park.

The water park actually consists of two parks across from each other, connected indoors. There are about a dozen water slides, a wave pool, a lazy river, toddlers’ area and pretty much everything else you can think of that belongs in a water park.

It’s important to be aware of what your kids can and can’t ride. There are six “big kids” slides and six “little kids” slides. Kids are given bracelets indicating their height (>48″ green, 42-48″ yellow, <42″ red), and the color of the bracelets indicate what slides they can go on. Greens can go on any slide, but yellows need to be accompanied by a grown-up on five of those six, and reds can’t ride any of them. There is no formal list anywhere on the website; you have to click on each slide individually to see who can go where. In addition, most of the large slides require one or two-person inflatable inner tubes. It’s no fun lugging those things up four flights of stairs (although there’s a “tube-escalator” that does the work for you on a couple of them). Bottom line: If you were expecting a quiet day to relax while your kids took to the pools, you may be in for a surprise.

The park is actually a great place to take toddler, as well. There is a dedicated area for the really little people with shallow water, sprinklers, water rides and cute little slides. There never seemed to be that many kids in the zone, so small children who are learning to get comfortable with water would have a great time here.

Logistics were done well. I was there during one of the busiest weekends of the year and there was rarely a wait to get a raft or get on a slide. The most we waited was about ten minutes, and that was for one of the most popular slides. The crowds do a pretty good job of self-policing the lines, but there were also Great Wolf employees everywhere. These were not bored teenagers checking their phones, either. I found them to be vigilant about safety and never had concerns for my kids.

For me, there were two major highlights. First, there was an excellent lazy river. You could sit in an inner tube and let the water push you along (although the kids tended to “help.”). But the best amenity was the indoor/outdoor hot tub. The hot tub on the inside could comfortably seat 15, but if you went through a screen of plastic strips (Think car wash.), you found yourself in a hot tub outside. There’s nothing like getting snowed on while sitting in a hot tub, or having half of your body too hot and half of it too cold. Small kids were having competitions to see who could melt ice in the water the fastest. Oh, by the way, to that guy carrying around his beer: If you take a plastic cup of beer into a hot tub with thirty screaming kids, you should expect it to get spilled. Just sayin’. Still, this was one of the more relaxing areas at the park.

We went with another family and decided to rent a cabana. It came with a table and six chairs, a fan, a television and a refrigerator (10 non-alcoholic drinks were provided for free.). Given the “organized chaos” of the park and the fact that people were lined up 30 minutes before it opened to grab chairs, we felt that it was a good investment.

Depending on the season, the park will open at either 9am or 10am. I bring this up because check-in is an early 1pm and guests are allowed to use the park as soon as they check in, meaning that the crowds go up significantly after lunch. Great Wolf is generous about usage, though. You can also use it the day you check out (which is at 11am).

We found service to be almost universally friendly, even though it was slow at times. It wasn’t quite Disney World, but most employees had smiles on their faces. Oddly, the only place we experienced bad service was in the cabana, where the server couldn’t be found and messed up our order. Still, that seemed to be the exception rather than the rule. Since this place is all about the kids, they do a nice job of keeping it relatively casual.

Speaking of food…it was, for the most part, pretty bad. Like children’s resort bad. As in, “we expected the food to be bad, but how can it be this bad?” Okay, that’s a bit of an exaggeration, but at a resort mainly for family and kids, expect them to be big on the chicken fingers and short on grown up food. If you are eating there, which you probably will (even though there are restaurants only a few miles away), I’d say stick to the pizza. For the most part, there was only a minimal selection of foods that would be considered healthy.

In a property as large and diverse as Great Wolf, there are bound to be some flaws, but truthfully, I came away surprised at how well the whole operation ran. Even at max capacity, the pools and slides rarely felt overcrowded and there were always plenty of activities for the kids.

Your vacation can cost as much or as little as you want it to. A standard room for four can be under $250 per night, which includes the water park. The rooms have refrigerators, so feel free to bring as much of your own food as you like. There are arcades, shops and even a kids’ spa to separate you from your cash, but you could easily spend most of your waking hours in the park. And while the restaurant food isn’t great, it’s surprisingly not overpriced, either.

We found the Great Wolf Lodge in Fitchburg to be an excellent weekend activity. It’s particularly nice to go with others, so your kid(s) will have playmates, but no matter how you do it, you will come home with happy, if exhausted, children.

In terms of value, it can't be beat. Rooms are inexpensive and include the water park and most other activities. The resort is 100% kid-oriented, so you can be sure that they will always be entertained. There are water slides geared toward kids of all ages.

Restaurant options, particularly for those who like to eat healthy, are not great. Younger kids may find that they are not allowed on certain slides, alone or with adults.

Overall, we had a great stay. The value was great and there were endless activities for the kids. We would definitely return, although I might choose not to go on a holiday weekend.