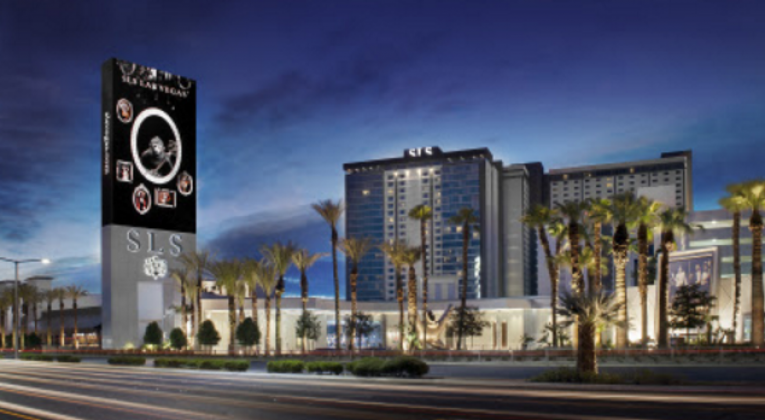 News Flash! The SLS Las Vegas has just been acquired by Starwood Hotels & Resorts. Why is this a big deal?

The hotel was known as Sahara Hotel & Casino for 59 years, starting in 1952. Right on the Las Vegas Strip, it held the distinction of being one of the last Rat Pack hotels. It’s a piece of history, with everyone from Abbott and Costello, Sonny & Cher to Tony Bennett and The Beatles staying or playing there.

The guest rooms and restaurants were the brainchild of famed designer Philippe Starck in conjunction with Gensler, and a few of the rooms were even designed by musician Lenny Kravitz.

After a long 59 year run the property was shuttered. In 2013 415 million was poured into the property and it was converted into the SLS Las Vegas that we know today (SLS stands for Style, Luxury, and Service) that is part of the Hilton Curio portfolio.

Not sure exactly where the SLS Las Vegas is located? It’s on the Las Vegas strip, on the far opposite end as Mandalay Bay, New York New York, and MGM Grand. It’s past Circus Circus, on the way to the Stratosphere.

Here it is via GoogleMaps –

Today Starwood Hotels & Resorts announced that they will be acquiring the SLS Las Vegas. Interestingly, this acquisition will be Starwood’s single largest addition of Starwood rooms in North America since before the recession.

It’s so big, in fact, that the property is going to be split into two separate hotels.

The third 289 room “LUX Tower” will be transformed into a W Hotel, and the renovations include adding a spa, fitness center, WET pool deck & bar, and signature W space that’ll serve as a lobby.

Receiving an average of 3 stars on Tripadvisor, the property didn’t get rave reviews as a Hilton hotel. There were issues with elite recognition among other things.

Prices at the property don’t run terribly high, with websites like Hotels.com showing it starting as low as $49 –

When it comes to suites, there are currently several different categories. These will undoubtedly change once Starwood takes it over but it is worth noting that rooms generally start small at 325 square feet –

Looking at that picture I am completely underwhelmed. It looks very dated and not very luxurious at all. The “floating bed” looks like it is right in front of the shower which may or may not have a full door that closes. I haven’t stayed there though, so the photo could be misleading.

The lowest category of suite currently is the Signature Suite at 490 square feet (which looks a little nicer).

Here are some current random date prices from SLS’ website –

Renovations are expected to be complete in 2016. Working with older existing buildings (and small rooms) will be a little challenging but I look forward to seeing what changes Starwood makes to the property. I think it’s great that there will soon be two new Starwood options in Las Vegas.

Are you excited about the property change over from Hilton to Starwood? What do you think about the decision to split SLS Las Vegas into two hotels?