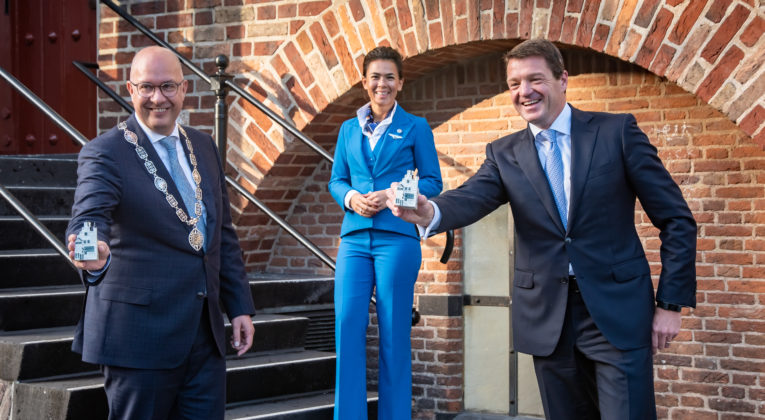 The Dutch national carrier KLM celebrated its birthday just last week. The oldest airline in the world is now 101 years of age. Last year there were a lot of festivities because of the 100th birthday. It was celebrated with several special events. This year is unlike any other due to the outbreak of the COVID-19 virus. The tourist industry, as well many airlines, have a hard time to survive this crisis. Nevertheless, KLM introduced its newest KLM house no. 101 as a gift to World Business Class passengers.

Every year on October 7th, the birthday of KLM, the airline presents the newest KLM house. The KLM house is a decorative Delft Blue porcelain mini version of an actual historical Dutch building. The mini house is filled with Dutch Bols Gin. Every passenger making an intercontinental business class trip with KLM will receive such a house. It is always a surprise which numbers are available! There is a house for every year of KLM’s existence, from now on you can thus choose from 101 houses!

Last year, it the new KLM house represented “Huis ten Bosch”. This is the Dutch King’s residence. The Dutch national carrier selected the royal residence because of KLM’s special ties with the royal family. Did you know that the Dutch King sometimes flies one of KLM’s aircraft to maintain his flying hours?

This year, KLM House 101 should have been presented in the Dutch city of Den Bosch. This is due to the location of the 101th house in Den Bosch. Unfortunately, the event was cancelled because of the new COVID-19 regulations. Alternatively, KLM’s CEO Pieter Elbers introduced the new house to the Mayer of the city of Den Bosch in a small group setting.

The newest KLM house, house 101, is “De Moriaan”. It looks like a little ‘castle’. The real building is still in the city center of Den Bosch and it is one of the oldest brick buildings in the Netherlands. Nowadays, De Moriaan houses the city’s Tourist Information Office.

In the early days of De Moriaan, the building was used as a trade center. In that time there was a canal at the back of the site. Here ships could deliver their goods to the warehouse. Traders would use the building to sell their goods.

Although the COVID-19 crisis is still on, KLM flies all over the world. On intercontinental flights you can fly in the Business Class cabin, called the World Business Class (WBC). In all of the widebody aircraft, the airline has the WBC seats installed. The newest airplanes, the Boeing 787-9 and 787-10, the airline has the reverse herringbone seats. In the Airbus A330 and Boeing 777 the airline has a 2-2-2 configuration with full flat seats. The service on KLM flights in World Business class includes one of the 101 KLM houses as a gift. In the month October every WBC passenger will receive the KLM house 101. After that, you gift depends on the available stock.

The CEO of KLM, Pieter Elbers said the following about the new house:

“It is important that we hold on to our KLM traditions in times of crisis. For our loyal customers, our miniature houses symbolise their ties with KLM, which we want to cherish and preserve. This is why we didn’t hesitate to produce house number 101. “Die Mariaen” symbolises the importance of international entrepreneurship for the Netherlands, especially in times of economic adversity. KLM’s job is to ensure that people can come together through our extensive route network. We will continue to fulfil this role.