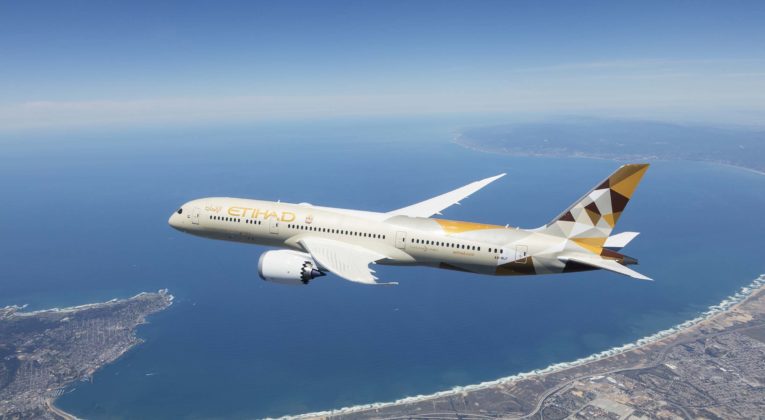 Etihad currently works with Boeing to developed a more sustainable type of Boeing 787 Dreamliner aircraft. They want to research how adjustments to the aircraft can decrease emissions whilst having the same performance. Noise pollution is also something to tackle. A brand new Etihad B787-10 Dreamliner will be used for several test flights. The efforts under the so-called ‘ecoDemonstrator’ program intents to help other airlines in the future as well.

The amount of seat of course is related to the configuration of the plane. Etihad operated three classes of travel on board of the 787-9 (including First Class). The 787-10 only offers two classes, being Economy and Business Class.

From August, Boeing will work with Etihad on a number of tests on a yet to be deliver Dreamliner. Both parties also work with NASA and Safran Loading Systems. One of the tests involves the landing gear as this may help reduce fuel consumption after takeoff and before landing. Results of the tests and insights in how the Dreamliners can become more sustainable are expected by the end of the year.

Will the Dreamliner really become a ‘Greenliner’? An interesting question that isn’t necessarily just about the popular Boeing aircraft. Of course, newer aircraft are more efficient and flexible. Fuel consumption is much lower and harmful emissions are also less. Airlines that operate (relatively) new aircraft are therefore a good consideration. Some airlines also make use of biofuel, which often is a mixture of traditional fuel and sustainable alternatives.

Airports increasingly also try to minimize their impact on the environment. For instance, new buildings are equipment with smart sensors and solar panels. Some airports even have ambitions to become independent of any source of energy, save wind and sun.

For some this is not enough. What can aviation do to become more sustainable? I think this is a legitimate question. At the same time, in the midst of a pandemic, it may be hard to find the way to go now. Although some governments that financially support their national airlines demand (sustainability) reforms in return for its loans. Time will tell how the aviation industry develops regarding this topic. Let’s hope at least the Etihad and Boeing can offer some interesting insights for other airlines as well.

Read more on News and Reviews on Boeing’s Dreamliner here.