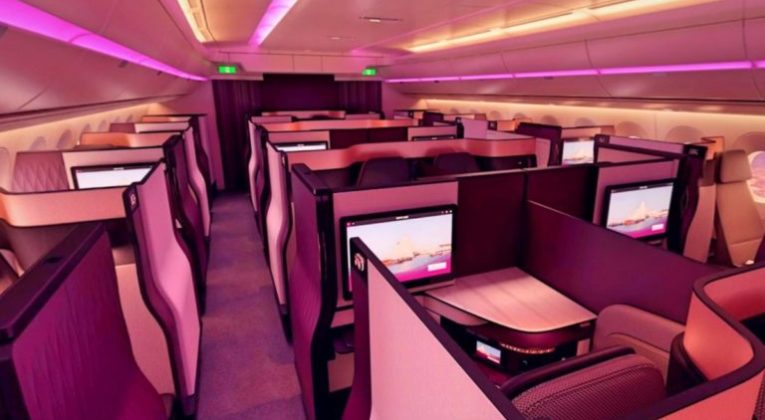 Want to fly the Qsuite yourself?

Qatar Airways is praised for its high-quality business class product known as Qsuite. Both the cabin itself, service, food and drinks rate high with frequent flyers. The Doha-based airline has received various awards for this. For example, Qatar Airways has been rated by Skytrax as one of the ten 5 star airlines worldwide, partly due to the Qsuite. However, Qatar does not fly on all long haul routes with this cabin. Here is an overview of the routes on which you can find the Qsuite.

Qatar Airways currently offers the Qsuite on board the Airbus A350 and the Boeing 777. However, not all aircraft of these types are (yet) equipped with this business class product. Word is out that this cabin will be onboard the Boeing 787 Dreamliner. But whether and when this will happen remains unclear for the time being.

Of course, it’s nice that the Qsuite is so well known, but what does it actually look like? This Business Class cabin is best known because it is actually a suite. The airline has designed the Qsuite in such a way that it can almost be called a first class cabin and experience. You can close a separate sliding door so that you are in your own “suite”. After Qatar introduced this Business Class “seat” in 2017, British Airways and Delta with a similar product followed. Of course, the service and food and drinks are also geared to a first class experience. Below an impression of what the Qsuite looks like.

As mentioned, not the entire fleet of Qatar Airways is equipped with the Qsuite cabin. As a result, this business class seat is not available in the entire long haul network. On the other routes you would be flying in the “normal” business class seat, which while comfortable, is clearly not a ‘suite’ seat.

The Qsuite can be found on routes from/to Africa, Asia, Europe, the Middle East and North and South America. Below an overview of the routes per continent (incl. flight numbers).

Qatar has an excellent network in for North and South America. There are eleven  cities in the U.S. that you can visit or fly through Doha from. They are Chicago (ORD), Houston (IAH), New York (JFK), Washington (IAD), Los Angeles (LAX), Dallas / Forth Worth (DFW), Boston (BOS) and Philadelphia (PHL). Then there is the Montreal (YUL) in Canada. Finally, you can fly from/to São Paulo (GRU) in Brazil and Buenos Aires (EZE) in Argentina in the Qsuite.

There are far more destinations to Asia than and other regional area—seventeen destinations in total. That is considerably more than the other continents. Australia and New Zealand are also included in this region. Below you will find all the destinations.

You can go to three cities in India. These are Bangalore (BLR), Delhi (DEL) and Mumbai (BOM). If you fly a little further, you will arrive in the Maldives (MLE).

In Thailand and Malaysia, Qatar flies to the capital cities of Bangkok (BKK) and Kuala Lumpur (KUL). You can also go to Singapore (SIN).

Would you rather go to China? Then you can go to Beijing (PEK), Shanghai (PVG) and Hong Kong (HKG) if you want to fly in the Qsuite. The city of Seoul (ICN) is also possible in Korea. Qatar flies to Japan on both Tokyo Narita (NRT) and Haneda (HND).

Then there is Australia too. In the network, you will find the cities of Sydney (SYD), Canberra (CBR) and Adelaide (ADL) as a destination. If you fly a little further, you will arrive in Auckland (AKL), New Zealand.

In Europe there are ten destinations where Qatar Airways flies with the Qsuite. The most relevant cities are: Paris (CDG), London (LHR), Copenhagen (CPH), Amsterdam (AMS) and Stockholm (ARN). There are also other ‘Qsuite cities, namely Berlin (TXL), Frankfurt (FRA) and Munich (MUC) in Germany. Finally, you can visit Zurich (ZHR) in Switzerland and Milan (MXP) in Italy.

Qatar Airways is the national carrier of Qatar. It is therefore not surprising that the airline’s home base is in Doha (Hamad International Airport, DOH). From Doha you fly with the Qsuite to only three cities. Logical, because the distances are relatively short. The three cities are Kuwait (KWI), Muscat (MCT) and Beirut (BEY). 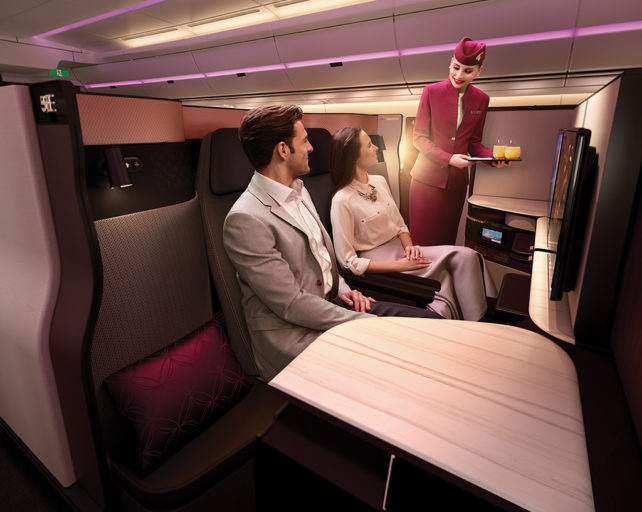 Qatar Airways flies from Doha (DOH) to Cape Town (CPT) and Johannesburg (JNB). These are flight numbers QR1369 / 1370 and QR1363 / 1364, respectively. From Doha you fly to Cape Town in around ten hours. You can be in Johannesburg with a flight time of around nine hours.

What are your experiences with Qatar Airways? Did you get to fly the Qsuite before? Let us know in the comments!