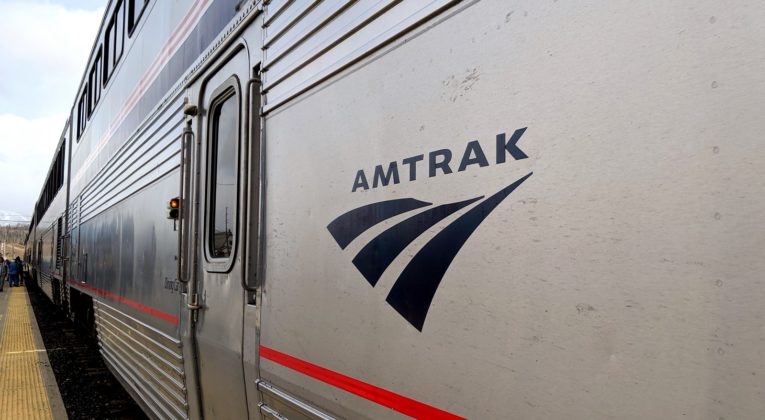 Back in February I detailed how excited I was to ride the California Zephyr from Denver to Northern California. A few years ago I had transferred Chase Ultimate Rewards points over to Amtrak (before that died) and then I finally used some of them to book the journey leaving Denver this past Tuesday.

Amtrak leaves Denver at the beautiful Union Station in Downtown. In order to be close I spent the night before at the Grand Hyatt Denver (beautiful hotel and full review coming soon) which is only about a 20 minute walk or 5-10 minute ride via the free 16th street bus.

A Winter Storm in May?!?

Despite it being late May, Denver and the surrounding mountains had quite a snow storm the night before my journey. Naturally, I was a little worried about delays. Upon arriving at Union Station I learned my train was delayed about an hour which wasn’t too bad. Unfortunately that was just the beginning….

The train actually arrived around 90 minutes late. I was excited to get going into the snowy mountains so I wasn’t worried. I quickly boarded the train and waited for the attendant to turn over my roomette from the departing passengers. It took about 10 minutes, but it seemed worth it to have a private little room for my journey through the Rockies.

Unfortunately things would go downhill from there. After boarding, we just sat at Union Station. This is a refueling stop for the train so I wasn’t too surprised. But then the conductor came on the intercom with the bad news. A freight train had decoupled on the tracks in the mountains west of Denver and was blocking our path. Worse yet, the crew had “timed out”. That meant that we had to bring a new crew up there and wait for them to fix the train. The delay could take “hours”.

And so we began to make our way about an hour into the mountains just outside of Denver. As I expected, the scenery was of beautiful freshly fallen snow. A treat in May, but admittedly not the landscape I had expected to see. The highlight perhaps was seeing a family of about 10 deer who probably were wondering why there was snow at this time of year.

Eventually, we made it to the broken freight train where we dropped off the new crew and took the old crew back so they could rest. Then we waited. It did indeed take many hours. Once we got going, we were about 6 hours delayed. For example, we pulled into Granby, CO at 5:08pm which was 6 hours and 31 minutes after our scheduled arrival.

By this time, it seemed like the delays were behind us. We chugged through the mountains in the rapidly fading sunlight. The 6 hour delay meant we would miss much of the Rockies due to darkness. Perhaps unavoidable but disappointing nonetheless. What I didn’t know was that further delays were still to come.

Another Crew Time Out!

We were gliding along next to the Colorado River around 7pm when the train came to a slow and gradual stop. At that time, the conductor came over the intercom and informed passengers that he and his crew had “timed out” and he could no longer operate the train. He also informed us that due to traffic caused by the weather, the other crew was at least two hours away. So I sat there, staring at the river as the sun faded over the horizon.

It did indeed take a couple more hours for the new crew to arrive and when we reached our next station at Glenwood Springs, CO. We were 10 hours and 10 minutes behind schedule. A day that was supposed to involve the lovely landscape of the Rockies had turned into one of waiting and waiting and even more waiting.

The Timing Was Off

Considering the California Zephyr normally pulls into its final stop of Emeryville at 4:10pm, I knew this delay would mean a very late night arrival even if they were able to make up time. I went to bed considering whether it would make sense to get off in Salt Lake City. Normally the Zephyr arrives in Salt Lake City around 11pm, but we would be getting there about 9am the next day.

My original plans to get home were to fly on a JetSuiteX from OAK-LAS. But I held off on booking due to my worries about delays (Good thing!). The thought of arriving in California at 1am plus the need for an expensive hotel room really turned me off. With that in mind, I decided to get off in Utah. I calculated that we would pull into Salt Lake at 9:07am, a full 10 hours and 2 minutes behind schedule.

While I got off the train and made my way home via a fairly expensive and painful Delta award ticket SLC-LAS, the train continued on and apparently hit EVEN MORE delays. According to Amtrak, the California Zephyr pulled into Emeryville at 4:56am this morning. That is 12 hours and 46 minutes behind schedule. I guess I wouldn’t have needed a hotel room after all. 🙂

I do believe this journey was handled really poorly by Amtrak, especially when it came to their crew timeout. It was clear they hadn’t sent the replacement crew in time which caused us to sit for hours when we could have been moving. The other major factor in delays is the tracks themselves. Amtrak doesn’t own them so the train is constantly stopping to give right-of-way to freight trains. A frustrating practice without a solution.

Yes, I do believe I am owed compensation as are the other passengers on this train. I will detail my request for compensation and the results in a separate post. Perhaps delays weren’t completely avoidable here, but a 13 hour delay and a lack of information conveyed to passengers is quite frankly unacceptable when compared to long haul train travel just about anywhere else in the world.

Conclusion on my whirlwind Amtrak Trip

In the end, my journey was the worst case scenario when it comes to Amtrak. I honestly didn’t get to see much of what I had hoped for on the journey. I might consider doing it again, although this trip did turn out to be somewhat of a waste of time. We’ll see what Amtrak offers, but I suspect I’ll return one day to see what I was denied on this journey. Once the frustrations of this trip fade away of course!

Have you ever ridden the California Zephyr or another Amtrak long haul train and faced severe delays? Share your experiences in the comments!