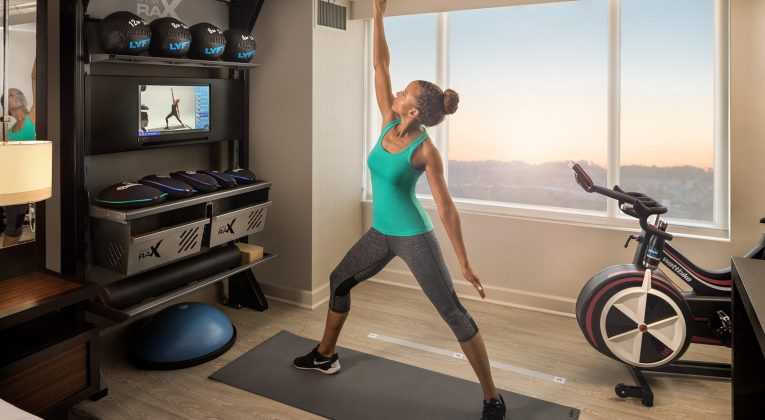 According to research published by the Cornell University School of Hotel Administration, while 46 percent of survey respondents said they planned to use the hotel gym, only 22 percent actually did so.

That shouldn’t come as any great surprise. There’s often a gap between our good intentions and our proven behavior.

Would more travelers take advantage of fitness equipment if it were in their own room, rather than in the hotel’s common fitness area? And more importantly from the perspective of hoteliers, might in-room gyms be a source of increased revenue and profits? Hilton suspects the answer is “yes,” and is now testing in-room gyms at two properties, the Parc 55 in San Francisco and the Hilton McLean Tysons Corner in Northern Virginia.

According to Hilton, “The new room category makes it more convenient than ever for road warriors, exercise enthusiasts, and those who prefer to workout in private to maintain their routines while staying with Hilton.”

From a consumer standpoint, the obvious question concerns value-for-money. How much is the added convenience of in-room fitness gear worth?

At the Parc 55, a late-June night in what’s listed as a Fitness and Spin Bike room is priced at $402 for the best-available rate. That compares with a $342 rate for a regular king-bed room on the same night. So, in that case, the hotel is charging a $60 premium for the in-room fitness facilities.

Hilton calls the concept “Five Feet to Fitness,” and plans to expand the new room category to include rooms at hotels in Atlanta, Chicago, Las Vegas, and New York.

How much more would you pay to upgrade to a room with fitness facilities?