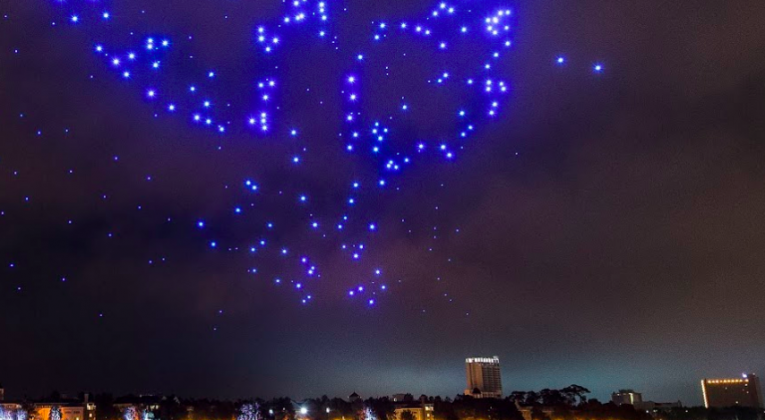 Light shows at Disney theme parks are always magical, but this year’s show at Disney Springs in Walt Disney World features a groundbreaking first in all of the United States. In a collaboration between Intel and Disney, 300 Intel Shooting Star drones are being used.

The Shooting Star drones fly through the nighttime sky in an elaborate choreography set to holiday music for the Starbright Holidays show. The drones change colors and form shapes, all done from a laptop with a single pilot.

To create the drone show, Intel sent 500 drones to Germany in October which broke a Guinness World Record for the Most Unmanned Aerial Vehicles airborne simultaneously.

Intel Shooting Star drones are made out of foam and flexible plastic. They weigh only 280 grams (less than 10 ounces). There are no screws. Each propeller rotates inside a protective cage. They’re designed to be safe, reliable and easy to fly. The purpose-built quadcopter drones are easily programmed for any animation and controlled by one computer. The fleet of drones is equipped to light the sky with more than 4 billion color combinations.

Here’s a teaser from Disney Imagineers –

Performances run nightly through January 8, 2017 at Disney Springs at 7pm and 8:30pm.